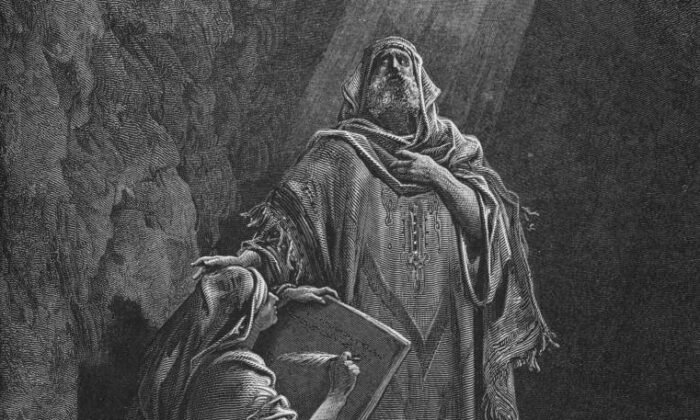 Throughout history, there have been times when people recognize that everything is falling apart, and it seems like civilization is crumbling around them. People begin to organize into groups and attack those not in their circle; it becomes difficult to discern the truth when people focus on attacking those who think differently.

The truth, however, often goes beyond the confines of our limited understanding. Gustave Doré’s engraving “Baruch Writing Jeremiah’s Prophecies” might provide an insight as to how to discern the truth during times of great dissent.

Jeremiah was a prophet and reformer between 650 B.C. and 570 B.C. in the Near East. There was a period of great transition during his life: The dominant Assyrian empire fell to the Babylonians, and a Neo-Babylonian empire came to power.

Jeremiah prophesied that the Babylonians would attack the people of Judah. The King of Judah, Josiah, decided to institute new religious reforms, but these reforms dealt mostly with religious rituals. Jeremiah tried to warn the people that reforming religious rituals was not going to save them from the coming disasters he prophesied.

Instead, Jeremiah exclaimed that people needed to repent for their wrongdoings and, from within themselves, begin true ethical reform. People needed to follow God’s way and accept their lots in life irrespective of how difficult they seemed. However, this message did not sit well with the Temple of Jerusalem’s authority, and Jeremiah was threatened and imprisoned.

Jeremiah would later dictate his prophecies to his scribe Baruch, and Baruch would read them at the Temple. After Josiah’s death, his son, King Jehoiakim, heard Baruch read Jeremiah’s prophecies from a scroll and ordered it cut into pieces and burned. Jeremiah went into hiding but did not stop dictating the word of God to Baruch, encouraging the people of Judah to trust in God and be good people.

Doré, in his engraving for the Old Testament, depicted Jeremiah dictating to Baruch. The size and contrast between light and dark in the portrayal of Jeremiah make him the focal point. He stands up in the middle of what appears to be a cave, which suggests that Doré depicted Jeremiah in hiding. His hooded robe covers his head as he looks up toward the light that descends on him.

Jeremiah holds one hand on his chest and places the other on the head of Baruch. Baruch kneels in front of Jeremiah. He looks up and diligently listens to Jeremiah as his hand readies to take down the prophet’s words.

The background seems dark and isolated. The textured walls and ground of the cave contrast with the smooth, flowing robes of the figures. The contrast of the figures with their environment reiterates their importance in the composition.

Minds and Hearts Toward the Divine Light of Truth

Doré tells us so much with his depiction of Jeremiah. Jeremiah has a light that shines on him from above like a spotlight. He looks up as if to take in and accept the light. Of course, the light represents God’s word.

It’s not only Jeremiah’s thoughts that are influenced by God. By placing Jeremiah’s hand up to his chest, Doré may be suggesting that his heart—a place often symbolic of emotions—is influenced, too.

Jeremiah shares this truth not only with his words but also with the hand he places on Baruch’s head. To me, Jeremiah’s words represent the thoughts and feelings that correlate with God’s message, but his hand on Baruch’s head represents action. This suggests that Jeremiah must not simply talk about God but also must act in accordance with God’s will.

Lastly, Doré did not depict Jeremiah receiving the light of God from the material world. Instead, the artist placed Jeremiah in a cave with nothing around him. The muted environment falls into the background and has little influence on Jeremiah. The only thing that matters is the light that falls on him.

Jeremiah shared the truth of God, a truth higher and more profound than of the world he occupied, and he did not care if it was not politically or culturally popular to do so. He was not concerned with the ideas of the Temple or the king, but with truth itself, which was beyond the confines of any group.

Maybe, if we turn our minds and hearts toward truth rather than against anything or anyone, we too can receive the light of God.