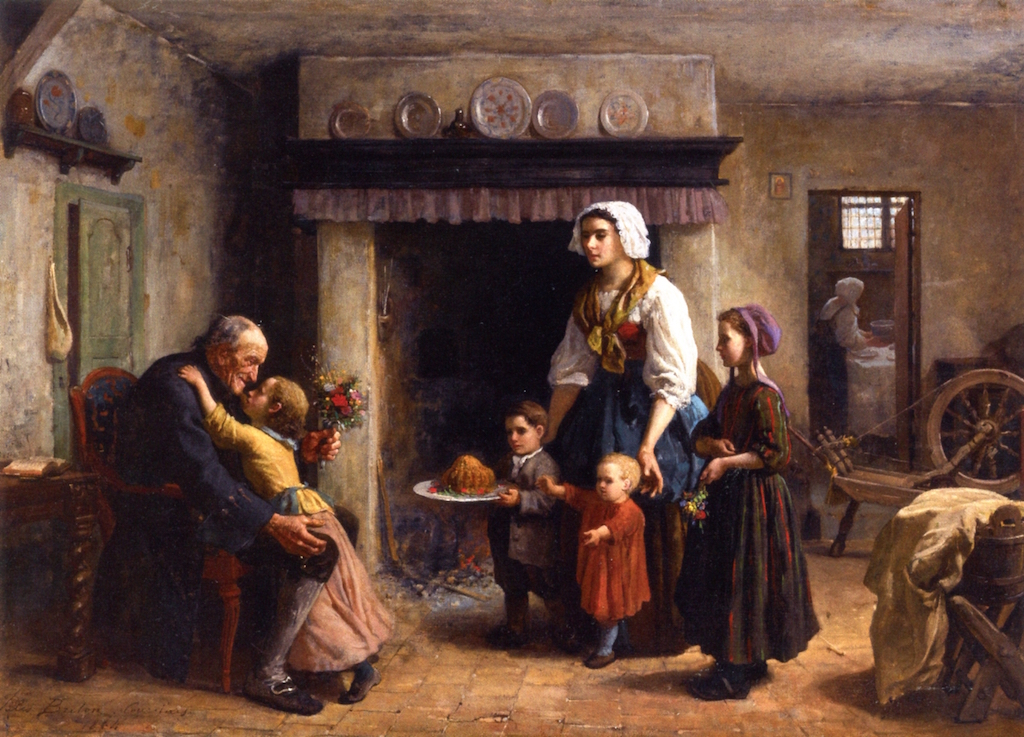 The Distinct Value of a Good Man

Art exploration for the young and young at heart
BY Andrea Nutt Falce TIMEJune 14, 2022 PRINT

Once, my dad talked to me about the death of his father.

“I’ve always known my dad had my back,” he said. “Even when he was so old that he needed me, I still had the sense that if anything really went wrong with the world, my father could save me. When he died, it felt like the weight of the world fell on my shoulders. I felt alone.”

My own father is a capable man. He played football and soccer and ran track for the Naval Academy. When he graduated, he became a fighter pilot. After serving in the Vietnam War, he became a surgeon. He’s the kind of guy who works tirelessly and proceeds with courage and unwavering integrity. Self-reliant a man as could be, it was eye-opening to discover that in his heart, my dad still felt as though he needed his father.

Recently, the vulnerability of a seemingly indomitable man presented itself again. Whether induced by COVID-19 or the shot, my dad suddenly suffers from a serious heart condition. It hasn’t stopped him from moving to a large farm in Alabama, crawling into tight spaces to reinforce old floor joists, rebuilding tractor engines, or helping needy ladies from church when their plumbing breaks, but it has set him back. He labors to breathe, his body demands rest, and the prognosis is poor.

Ever a model of strength, the revelation of my father’s fragility has been impactful. But fragility is part of life. We are each of us conceived in neediness, requiring love and support from the womb. As we grow, we strengthen. Still, nearly all will live to discover, in one way or another, that weakness is a human condition. May the capable have compassion on those whose vitality falters, for all will face frailty one day.

When I finally came to understand that my dad was terribly sick, I broke down and sobbed. The love of a father is hard to overestimate. There’s strength in knowing he’s behind you. The value of one good man and the impact he has on a needy world, especially as a father, is enduring. My husband comforted me, and I cried.

“I can’t picture the world without my father,” I said. “What will happen when the best of men passes?”

My husband answered soberly, “We will fill his shoes.”

How can I fill my father’s shoes? I’m not a father. I’m a mother. I see through my father what it is to be a man, and even through my sons the unique nature of a little boy. We wear different sizes and styles. Men and women are distinct from one another. The very process of conception highlights that reality. Men and women are not the same, but they’re created with marvelous complementariness.

As a wife and a mother, I learn so much. One thing I’ve discovered about boys: They’re ready for a fight any time. Now don’t get me wrong. My sons are as sweet as children can be, but none is a peacemaker like my daughter. From our 5-year-old baby to our bright 7-year-old to my 14-year-old boy whose deep and beautiful soul continues to amaze me, however loving, sensitive, and adorable, given provocation, a guy will fight. When a boy gets pushed, his knee-jerk reaction is to push back. I advise my sons to channel that inclination and use it purposefully, to fight the good fight. Perhaps men are more disposed to battle, and if so, may the good guys use masculine strength to stand against corruption.

Although men and women are different right down to their DNA, we can both be dauntless. We’re all called to resist evil. I can’t fill my father’s shoes physically, but I can follow his footsteps along a straight and narrow path. His worldly accomplishments will be different from mine, but admirable as they are, it has always been his charitable heart that’s the most impressive.

I’ve worked beside him in Nicaragua to treat nonhealing wounds on a grandmother’s leg and club feet on little babies. I’ve been with him to the house of a poor American farmer when it was too hard for the patient to make it to the office. How often did my dad work without pay and explain that he received more than gave because of a patient’s kind and thankful disposition?

My father taught me humility and respect for human life, and perhaps the greatest inheritance I’ll receive from him is a love of the truth. I’ll take what my father gave me and reinvest. I’ll strive to give of myself and walk in the way of truth. That’s what he raised me to do. We can expand each other’s efforts with grace.

The older I grow, the more thankful I am for a principled man. As I watch my daughter and sons grow, I’m grateful for a solid husband. Virtuous husbands and dedicated fathers are the best friends of hard-working mothers, wives, and wholesome families.

This Father’s Day especially, let’s appreciate the value of a good man. Good men stand against the pressures of the world with courage, back up strong families, and raise up healthy societies. Good fathers lift able women and protect children.

Jules Breton is an upstanding man from another generation. He used his talents to represent man, woman, family, and community in art. Born in 1827, upon the death of his mother, Breton was raised by his father starting at age 4. His father, a landowner, also worked as an assistant judge and mayor while overseeing a duke’s lands, at the same time rearing and educating his own children.

Although Breton died in Paris in 1906, he was never very cosmopolitan. Country values, coupled with a provincial accent, separated him from the Parisians’ easy manner. In 1848, after traveling around Europe, Breton returned to his home village of Courrières, France, because his father had fallen ill. His father had sustained the family well, but when he was buried, they fell into debt. The death of his father affected Breton deeply. The family needed support after his loss, and it was found in the generosity of a kind community. About that time, Breton wrote, “Thus it was that which grew up in my artist’s heart—a stronger affection for the nature, the obscure acts of heroism, and the beauty of the lives of the peasantry.”

Breton had a cultivated love for farmland, common folk, and the dignity of wholesome work. He celebrated the simple life. In his paintings, the labors of men and women, working side by side from dawn until dusk, create a strong metaphor for the journey of life. Breton’s paintings enjoyed success during his lifetime, fell out of favor after his death, and regained critical acclaim within the 20th century.

Also a published author, Breton once wrote rather farsightedly, “The public often allow themselves to be deceived by appearances, and do not easily distinguish the false coin from the true. The crowd, led astray at first … we see them going into ecstasies before masterpieces which, at the bottom of their hearts, they still think ugly. True art will always address itself only to a limited public.”

The world will always struggle to see. It helps to hold on to the purest influences gained in youth and through ordinary people who set extraordinary examples. Whether boy or girl, man or woman, father or mother, we’re all called to love, serve, toil, and fight for all that’s beautiful, good, and true. We each get one life.

Seeing grave illness in a father who sheltered me since birth is jarring and heartbreaking. Although all the world be mortal, I still can’t believe it of my father.

While his physical strength may be diminished, my dad’s true heart is stronger than ever. He addresses life and death with faith and moral courage. The patrimony of a great father and the soul of a holy man are eternal. May we live to uphold them.