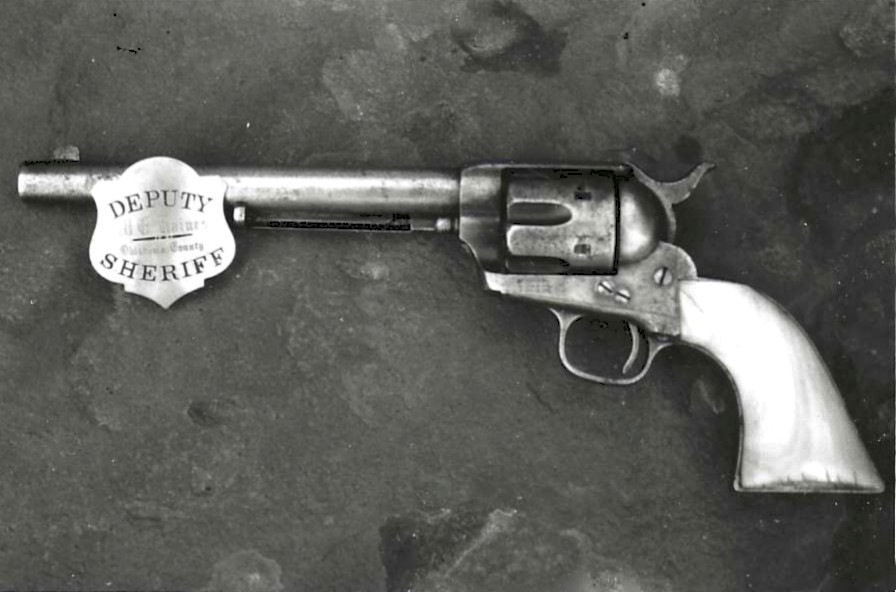 The Days of the Wild West: A Writer Uncovers His Great-Grandfather’s Exploits as a Deputy Marshal in Oklahoma

Even as a youngster growing up overseas, Oklahoma was always “home.” It was also the homeland of my childhood hero. I never had the privilege of meeting my hero, as he died in 1928, but my father told me amazing stories about my great-grandfather, U.S. Deputy Marshal Wiley G. Haines. As a result, I grew to know him very well.

As a boy, I can remember sneaking out of bed past my bedtime to hide behind a chair and watch my favorite TV show, “Gunsmoke.” Marshal Matt Dillon was my TV hero, but in time I became much more impressed with the exploits of my real-life hero and great-grandfather.

Haines grew up in Missouri, where his father, the Rev. John W. Haines, helped found what is now known as Southwest Baptist University. As a youth, he had many adventures, including making a cattle drive and journeying to California. Haines taught for a short time at Southwest Baptist, but the Land Run in Oklahoma Territory (OT) in 1889 intrigued him. He staked a claim in what would become downtown Oklahoma City and went into the real estate business. But the real estate life was too tame for Haines, who began his law enforcement career in 1890 as a deputy sheriff in Oklahoma City.

In 1893, the Cherokee Outlet was opened for another land run. Six million acres and approximately 100,000 new citizens were added to Oklahoma Territory in one afternoon. Haines got a job as an undersheriff, and he and his new wife, Sarah, lived on a farm near Perry, OT. His job kept him busy patrolling a section of Perry aptly called Hell’s Half-Acre. Perry had literally sprung up overnight due to the land run, with 25,000 citizens. Over 100 saloons, gambling dens, and dance halls gave ample opportunity for mischief. In addition, an average of one and a half killings per day kept Haines and his colleagues occupied with the monumental task of keeping the peace.

By 1898, Haines had received a federal commission as a U.S. Deputy Marshal and relocated to the Osage Indian Reservation in northeast Oklahoma Territory. There, he worked for the next 30 years, dispensing his brand of frontier justice. My father’s stories eventually sparked 10 years of research for a biography of Wiley Haines, which I published 20 years ago. I learned a great deal by sorting through two trunks of his papers that my father had recovered from Haines’s old home in Hominy, Oklahoma. Writing the book was like an adventure, uncovering and preserving tales from a bygone era—such as his shoot-out with the infamous Martin brothers in 1903.

The Martins had robbed and murdered across three states, including robbing over 100 people on the way to a picnic in one afternoon. The Martins’ reign of terror ended when they came up against Haines and his two deputies. The outlaws were shot and killed, and Haines was seriously wounded, but recovered.

A big part of Haines’s duties was serving as the chief of Osage Indian Police. He learned the Osage language and became a trusted friend of the tribe. He represented the tribe at the Department of Interior in Washington, D.C. Haines took particular pleasure in watching the Osages become the wealthiest people per capita on Earth when oil was discovered on their reservation. He was presented a solid gold French pocket watch by an Osage chief as a token of the tribe’s thanks. The watch remains a treasured heirloom of the family today.

The assignment as a Deputy Marshal in Indian and Oklahoma Territories was one of the most difficult law enforcement jobs in the country. Most of the officers performed their duties single-handedly and without fanfare. They were true professionals, far removed from the Hollywood version of a lawman.

Haines described the times as follows: “The country was teeming with horse thieves, whisky peddlers, and every sort of fugitive. The officer’s job was often made difficult by the lack of help provided by the citizens who were cowed by the outlaws.”

For nearly a year, Haines kept a daily log book detailing his many encounters with law-breakers. The entries span the months at the turn of the century, from 1899 to 1900. It is a pity that the record is so brief, but it nonetheless gives a good insight into the day-to-day life of a frontier marshal. A few of the entries are as follows:

“August 18, 1899 Return home—got to Hominy and receive anonymous letter signed “House Crik” threatening to kill me if I don’t leave the country before court.

September 5, 1899 Agent Pollock sends me out to try and find Z.T. Alred who is accused of raping an eight year old girl.

September 18, 1899 Monday night Constable John Plummer and I take thirteen Indian boys to Elgin, Kansas for Dr. Divan, who is aiming to take them to Carlisle, Pennsylvania [Indian boarding school].

September 24, 1899 Went to Alex Davis’ and hunted for George Denver who is accused of larceny of hogs from John McCoy.

September 25, 1899 Went to Denver’s and got him. Searched … for Glenn Flippens, who is wanted for almost every crime.

October 21, 1899 Hear of outlaw in vicinity by name of Frank Watkins. Up all night. Catch him at daylight Sunday morning.

January 9, 1900 I quarantine against other parts of Oklahoma and Kansas (due to smallpox outbreak).

February 4, 1900 Am notified that horse thieves have again made raid on Indian horses. After riding 35 miles, we find the trail and discover the horses. I observe several objects through the brush of the blackjack trees. I call, “Hey there! Hold up your hands!” I see a commotion but no sign of obeyance to the order. I fire and advance two or three steps. Call again, am not obeyed. I fire again and see two persons with hands up and find that I have fatally shot two horse thieves.”

Since the Osage Reservation was federal land, selling alcohol was forbidden, and Haines’s job was to keep the contraband out of the reservation. Thus, Haines was a much sought-after expert during Prohibition, consulting with groups like the Texas Rangers.

By the turn of the century, the territories had earned a reputation as a refuge for every sort of outlaw. Fugitives from surrounding states could escape into the territories, where they could be extradited only for federal offenses.

For us today, it is difficult to conceive of the hardships that Haines dealt with routinely. Whether riding on horseback through a blinding snowstorm or blistering heat pursuing outlaws or facing the guns of desperadoes, he had to be prepared for anything. Through it all, he won his reputation as one of the most successful criminal officers in Oklahoma.

Before he died at 68 of a heart attack, Haines could take satisfaction in seeing a wild and lawless frontier take its place in civilized society. He became known as the “Peacemaker of the Osage.” The epitaph on his tombstone aptly sums up his life: “An Honest Man’s the Noblest Work of God.”

“There was in the time of Haines … no elaborate law organization. An officer then was literally the law and nothing but his judgement and his trigger finger stood between him and extermination. He had nowhere to pass the buck, no alibi, no reinforcements. It was often the case of a lone man against a pack of cunning devils long used to the brush and the cave. These men of law had no brass bands, typewriter, or press agents and they had to be deadly as rattlesnakes.

Haines, like most of the real officers of his time, was rather modest and unpretentious. Practically none of the old-time officers … had the courtly manner, the dramatic look, or the towering presence. They were the forerunners of our civilization, and their job was a grim one. They were just as far from the movie type of gunfighter as possible. …

The passing of these unromantic men constitutes the passing of an era. It was a rough and ugly era, but in light of that which came after, it was heroic and exciting.”