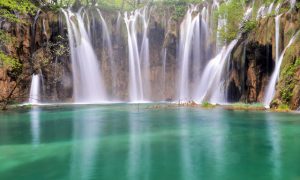 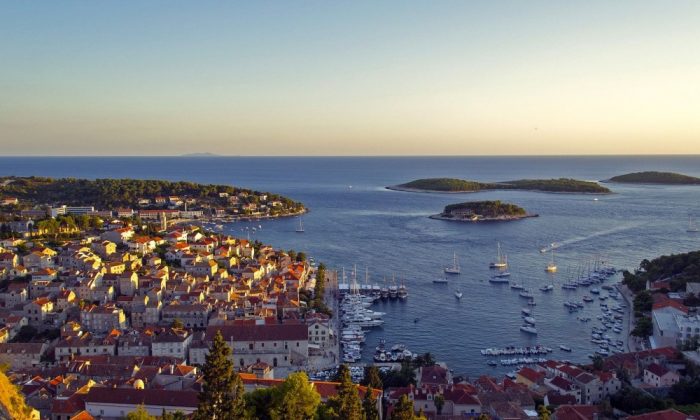 The Dalmatian Coast: Split, Hvar and Other Islands

Some see Split as a mere terminal to its neighbouring network of paradise islands. Let me assure you, it is not. This city is the cultural hub of Croatia, and offers a matchless combination of hedonism and historical discovery. If you’ll pardon the unfortunate addition of bleak and unsightly apartment blocks that now occupy the central zone, the Roman architecture and surrounding coastal mountains are simply mesmerizing. The showpiece of the portal city is undoubtedly the remarkable Diocletian’s Palace, which has stood and sprawled across the city centre for around 1,700 years.

Unlike most other architectural marvels, Diocletian’s is used as it was all those years ago – people still live within its bomb-blasted walls as though it is completely normal. But to tell you the truth, it is normal; there’s nothing odd about turning a corner to find damp rags and wears hanging out of a crumbling stone window or a local woman busily sweeping dust into the remains of the palace cellars beneath her home.

The palace looms within the grounds of Peristil Square, where numerous other charms can be sought out. Take the famed and tourist trafficked statue of Gregory of Nin, for example, whose big toe apparently brings good luck to all those who touch it– a superstition visibly abided by due to the smooth and shiny appearance of the rebel bishop’s worn dactyl.

Split is definitely a walking city, and you’ll most likely need to refuel at some point. The best place to do this is along the city’s dockside Riva, where scores of outdoor cafés and ice-cream parlours stretch as far as the eye can see. It’s a perfect spot to take in the city’s beauty and history, while watching the never-ending stream of ships and catamarans trickle in and out of the harbour.

While by day Split might seem like the sort of laid-back and languid place you’d typically expect to find along the Dalmatian coast, it is in fact a feverish and lively metropolis by night. There are plenty of bars, clubs and discotheques in which to spend the night falling in and out of, and drinks prices and entry fees are far more agreeable than neighbouring Dubrovniks’ for instance . Locals generally wind up in Ghetto Club or Bacvice Club come the early hours of the morning.

As a dockside city, Split is also readily accessible by boat should you be coming from one of the islands. However, while transport from Split is regular, ferries incoming from the neighbouring islands are not. Tickets can be bought from the harbor but only on the day of the journey.

There is a train station, though actual running trains are scarce and stops along the line are few and far between. Split is actually the end of the line. Buses are best and offer direct and low-cost services to Dubrovnik and Zadar.

Standard mixed bed dorm from €19 per person per night.

An Egyptian sphinx was imported into Split centuries ago and now sits by Diocletian’s Palace. The sculpture is said to be more than 4,000 years old.

Two or three nights with busy days in between is enough time to see and make the most of Split.

There’s a lot of mixed feeling when it comes to Hvar. Many single the island out as Croatia’s best and most appealing, while others view the so-called Croatian Madiera as a spoilt and overrun tourist trap, where it is nearly impossible to savour a moment’s peace. Both arguments are valid; the island has become noticeably marred by the tourist footprint in recent years but it can still be enjoyed and should by no means be left out of your itinerary.

There are several towns and around twenty villages on the island. Hiring a moped and zipping off on your own for a few hours is the best way to get a feel for the place – with stop-offs at sleepy Stari Grad and Jelsa all but obligatory along the way. When you’re not off exploring, choose between a plethora of bays and beaches to sun yourself on, though be sure to take some sturdy footwear and some change for a sun-lounger – rocks feature quite prominently both off and on the beach.

The island is drenched in Venitian and soviet history, and evidence of the two eras’ influence is no richer than in the streets of Hvar Town itself. Here, the Roman-built castle overlooks the bustling, yacht-awashed harbor and if hiked to offers an array of stunning, panoramic vistas. Between the castle and the harbour you’ll find a sea of red-brick roofed houses and perhaps the odd rusting Skoda, and looking the other way you’ll encounter scores of vineyards, olive groves and lavender fields rolling over one another all the way to the horizon.

There is an abundance of tour agencies offering day excursions to the contiguous Paklini Islands, and signing up for one is well worth the time and money (especially if you’re a nudist beach aficionado) – Hvar Tours offer some great packages and have received outstanding reviews.

During the summer months the island is abuzz. Hvar Town is unquestionably the noisiest port of call, where bars and clubs along the seafront blare out the latest poppy stuff well into the night. From here, partygoers can take the regularly running speedboat to the neighbouring island of Stipanska, where the suave and swanky ‘Carpe Diem’ nightclub is located. There are also a great deal of expensive bars and restaurants on the main island in owing to its ever-increasing appeal to celebrities and other filthy rich regulars. Roman Abramovich is just one name on a long list of A-listers that often drop by.

Ferries from Split are frequent and cheap at around €3. However, there aren’t as many return journeys so buying your ticket early in the morning of your departure day is recommended.

There are local bus services on the island, though hiring a bike or jeep is a much better way of seeing Hvar.
hr19 The Dalmatian Coast (Part Two): Split, Hvar and Other Islands

Hvar is home to Europe’s oldest municipal theatre, built in 1612.

Two or three nights is about right for Hvar. However, be warned – moving on is a challenging task.

Hvar is without doubt the most developed and popular of the Dalmatian islands, though there are many others which have in recent years begun to attract more and more tourists, owing to an often quieter and more laid-back vibe.

Vis, the northernmost of the archipelago, was only developed as a tourist hotspot following the collapse of the Soviet Union. Fortunately, since its opening to the public in 1989, the island has remained largely unspoiled; its lush countryside, untouched beaches, abundant vineyards and distinct lack of ugly hotels ensure peace and tranquility for anybody looking to escape the fuss.

Further south, closer to Dubrovnik, Mijet offers a similar package. Half of the island is a national park and there is but one road linking the few fishing villages across the island. Visitors can take advantage of perfect environs for hiking, biking, kayaking and scuba diving. The national park is famed for the Odysseus Cave, where the legendary Greek King supposedly stayed for seven years.

Korluka is a little busier, and while not left wanting in terms of natural beauty, the island can get somewhat crowded during the summer months. Unlike many of the other islands though, Korluka boasts a cornucopia of historically diverse architecture – Korluka Town itself perhaps the most notable of examples with its Venetian feel.

Other islands worth investigating are: Pag, known for its party scene and pungent cheese; Brac, a dry, mountainous island famous for its olives; and Pašman, another verdant setting which is deemed to have the cleanest water along the Dalmatian coast due to its constantly changing current.

All of the Dalmatian islands are reachable by boat from either Split or Dubrovnik, depending on which city is closer. Timetables vary according to the time of year, and the smaller islands are generally less frequented.

With the exceptions of Viz and Korluka, each of the islands can be explored at length in just one day, though if peace and tranquility is what you’re after, you might want to stay a little longer…

This article was originally published on Cheeky Jaunt by Josh Taylor. Read the original here.