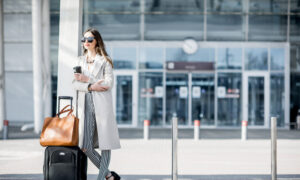 Ah, to be young again. On my recent flight back home, I was made to reminisce about my early days of travel when I was naïve and inexperienced. For instance, I used to carry a Louis Vuitton duffle bag as my carry-on. Yes, it might have been chic. However, it weighed at least 25 pounds (if not more) when it was packed full. I also used to carry a very heavy computer bag on the other shoulder that was often stuffed with documents. I remember reaching my seat on the plane with a collection of bruises, and not to mention aching shoulders.

Just a few days ago, I watched a few travel faux pas unravel before my eyes by a few colleagues of mine who have not logged in as many miles as I have over the years. I realized at that moment, it would be worthwhile to share a few tips with those who may be new to the traveling life. Here are some basics I hope you will find useful:

1. Repeat after me: “Always stay with your bags:” My team had arranged to leave the hotel at 5:30 a.m. so we could reach the airport in time for our 9:40 departure. However, we had an issue with our car service. Only one vehicle showed up, but there were five of us with many bags and we needed another one. In a mad dash to keep on schedule, I jumped into one car with two other colleagues and off we went leaving two others behind a few minutes. When we arrived at the airport, one of my companions disclosed that she had left her suitcase on the bellhop’s cart and she hoped that it was with our other colleagues who took the other car. She was anxious and angry, causing us all a few tense minutes. We eventually caught up with the other half of our team and they happily did have her suitcase—but this was a very unnecessary drama that was easily avoidable. Wherever you are, wherever you go, your bags should be too. That is a very important lesson.

2. Bring a luggage scale: We happened to have traveled coach on this trip, as our flight was less than 5 hours, and this is our company’s policy. The airline we were on had a very strict 50-pound suitcase rule, as many do these days. If you went over that limit, hefty fees would be charged. One of my colleagues had to open and “rearrange” her luggage right at the checkout counter because she was two pounds over. They would not let her slide. She thankfully had a bag to put her newly purchased boots into, which got her within the acceptable weight. To avoid embarrassment and stress, I suggest bringing a digital scale with you when you know that weight restrictions are tight and you have a high risk of going over. You can find inexpensive scales that will set you back $20 or under, and spare you this easily avoidable hassle.

3. Roll…never carry: I can’t tell you how much easier my life has become after I purchased a wonderful 360 degree spinner wheel carry-on computer bag. Zipping through the long corridors of the airport, as well as getting down the slim center aisle of the plane have now become a pleasure instead of an exhausting task. It was a shame to watch as some of my colleagues struggled with their heavy bags just as I had for many years. This kind of pain isn’t necessary and is easily solved by investing in a roller bag, which can be found for very reasonable prices ($30 or sometimes less) at discount stores everywhere.

As always, I wish you all the happiest of travels!