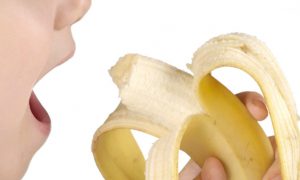 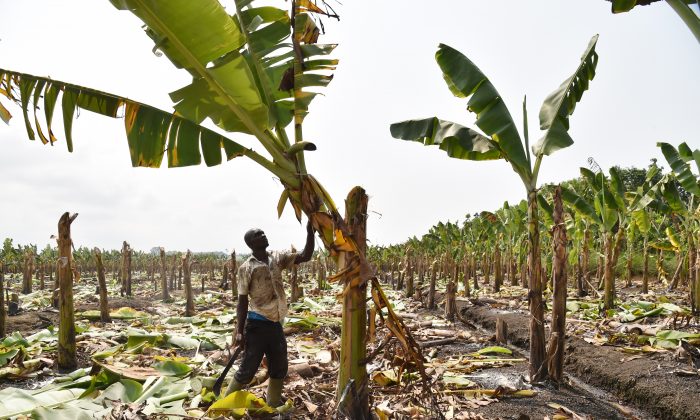 A farmer checks on July 15, 2014 damage on a banana plantation outside the Ivorian town of Dabou, 60 kms west of Abidjan. (Issouf Sanogo/AFP/Getty Images)
Business

The Common Banana Is in Danger of Being Wiped Out

We love to eat bananas. The nutritious, easy-to-peel fruit is the most widely consumed fruit in America and has become a staple of the Western diet, even though the crop is primarily grown elsewhere, such as the tropical areas of Southeast Asia, the Middle East, Africa, and Latin America.

Global banana exports reached a record high of 16.5 million metric tons (18.15 tons) in 2012, most destined for the United States and Europe, which together account for about 54 percent of the all bananas traded internationally.

A fungal disease currently spreading across banana plantations is threatening to wipe out the Cavendish crop.

Although there are about 1,000 different varieties of banana, almost all that are cultivated for export is of the type called the Cavendish, sometimes called the table banana. It’s long, slender, and thick-skinned, and sold in most supermarkets in Western countries.

But a fungal disease currently spreading across banana plantations is threatening to wipe out the Cavendish crop.

Known by scientists as the Tropical Race 4 (TR4) strain of Fusarium wilt, and commonly called the Panama disease, the disease first appeared in Taiwan, and has since spread to much of Asia, the Middle East, Africa, and even Australia.

Last December, the FAO convened a group of experts in Rome and Italy to tackle the disease, which the organization called “a top threat to global banana production.”

Now, a University of Florida plant disease scientist who first identified TR4, Randy Ploetz, warns that the disease could spread to the Western Hemisphere soon.

“It’s not in the Americas yet, but if it moved from Southeast Asia to Africa and the Middle East, then a jump from these areas to the Americas is certainly possible,” Ploetz said in a press release.

Currently, there are no known treatments for the disease.

The United States, which produces very little of its own banana consumption, imported 4.35 million metric tons of the fruit in 2012 (about 31 pounds per person), mainly from Latin America.

A disease outbreak there would mean no more bananas for Americans and others who import the ubiquitous Cavendish.

Currently, there are no known treatments for the disease.

Researchers think that the disease is spread through workers who carry the pathogen after working in contaminated fields.

The Cavendish became today’s popular banana of choice because it had survived a similar blight in the early 20th century.

Back then, the banana industry primarily exported the Gros Michel variety of banana, until the Tropical Race 1 strain broke out in Latin America, resulting in more than $2 billion in losses and nearly destroyed the world’s banana export industry, according to the FAO.

Luckily, the Cavendish was resistant to Tropical Race 1. It replaced the Gros Michel as the new export favorite.

Now, however, the Cavendish is proving vulnerable to disease too. Scientists are trying to develop disease-resistant banana varieties to fight this latest outbreak.

The FAO reported that one particular variety, called GCTCV-219 developed by the Taiwan Banana Research Institute, resembles the Cavendish in both taste and shape. The variety is now being promoted in the Philippines to see if it can undo some of the damage Tropical Race 4 has done.