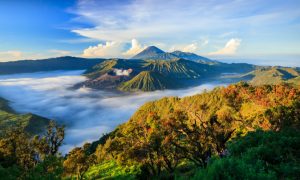 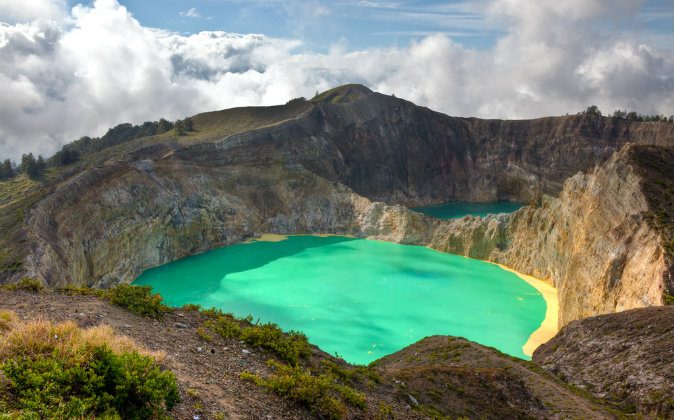 The Colored Lakes of Kelimutu

It had been raining all week. The sky was completely blanketed in grey. But we took a chance and decided to visit the crater. My wife, Lobo, and I had only this chance to see the colored lakes of Kelimutu in the island of Flores in Indonesia.

As we climbed, the mist got denser. We could barely see what lay ahead. Two French tourists were coming down, “We couldn’t see anything. We spent three days here and everyday it’s the same. We are so glad we are leaving tomorrow.” The local Lio tribe believe that visitors hoping to get a clear sky when visiting Kelimutu should bring small gifts for Konde Ratu, the guardian spirit. We realized in horror that we had nothing.

But as soon as we crossed the park entrance, the sky began to clear up. Konde Ratu had accepted the entrance fee as our gift. Bit by bit, as we climbed higher, we could see more around us. Soon the first rays of sunlight hit our faces. We screamed in delight, “Yes, Mr. Sun! You can do it.” We ran to the lakes like two kids chasing the last remaining packet of candy in the world.

Mr. Sun kept trying his best to sweep out the mess in the sky and when we arrived at the first lake, there was just a candyfloss sized cloud reluctantly climbing out of the crater. From the viewing point, guarded by an annoying red railing, we saw the swimming pool sized turquoise lake. It was a little unimpressive for its reputation, but we were exhilarated more at the fortunate turn of events. Restless, we bumped into every inch of the railing to catch a view from all angles, like two urchins trying to get rid of the ice slipped through our clothes.

Tucked just above one corner of the first lake was the second, another turquoise water body. Scraggy and lifeless rocky walls in red enclosed the lakes. We rushed to the highest point from where all three lakes would be visible, afraid that the sun would set soon. The third lake was a bowl of Coca Cola. The sun glared from behind its walls making it difficult to keep looking at it for long. It was alive. It held the position of power in this rotating arrangement among the three, determined by the movement of the sky around the sun.

MORE: How to Travel Flores (Indonesia) in 1 Week

The Lio believe that the spirits of people who die at an old age go to reside at TAM, of those who die young go to TiN, and of those who had been evil are condemned to TAP. Konde Ratu assigns the lakes to each spirit. TAP didn’t seem to be a worse place than TAM or TiN, except for that ugly red railing around it.

The colors of these volcanic lakes had been different a few years back. The turquoise lakes had then been red and green. As their water levels change because of rainfall, evaporation and seepage different salts from the rocks dissolve in varying concentrations, thus giving the lakes a change of coating every few years. The Lio believe that the lakes change color with the changing moods of the resident ancestral spirits.

Copyright © 2014 by Vagabond Journey Travel. This article was written by Shivaji Das and originally published on www.vagabondjourney.com