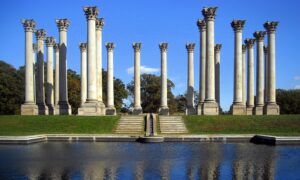 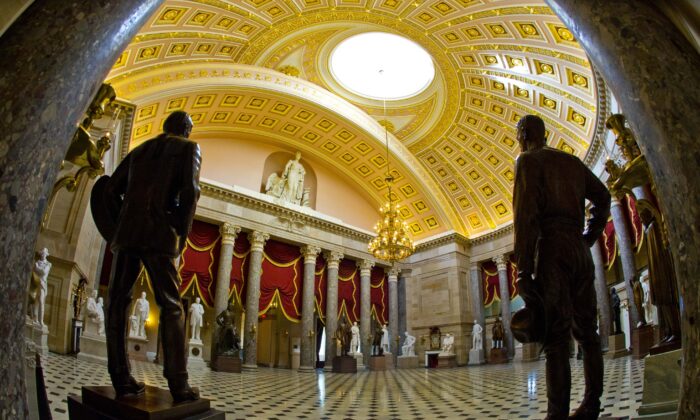 On the quick walk from my office to the House floor to vote, I paused a moment in Statuary Hall, my favorite room in the Capitol building. The room once served as the meeting place for the U.S. House of Representatives, back when there were fewer representatives and each member’s desk could fit in the grand space. An early example of Greek revival architecture, Statuary Hall is encircled by thirty-eight marble columns. Statues of famous Americans span the perimeter.

As a congressman, I enjoy taking guests on tours of the Capitol. On those tours, I spend most of the time in Statuary Hall because the room has so much to offer, from history to the constitutional lessons.

On this particular December evening, I approached the room with a different feeling. I stared for a few moments at the statue of Lady Liberty near the ceiling, her hand extended with a scroll. The thirteen-foot statute is perched directly above where the Speaker’s desk was previously located in the chamber. I often tell tour guests, “This is one of the most important statues we will see on the tour. She’s Liberty, and the scroll in her hand is the Constitution.” Ever since 1817, Lady Liberty has offered this remarkable document to members of the House as an eternal reminder of our responsibility to honor the Constitution in everything we do.

Back in the day, it would have been impossible to look at the Speaker’s desk without taking in the full glory of Liberty and remembering the Constitution. But not anymore. So much has changed since the House relocated to the current chamber.

Ever since I was first elected to Congress in 2014, I felt an undeniable connection to this particular statue. The first official event in Washington I attended after the election was a dinner in the Capitol for new members of Congress. One of the historians from the Library of Congress joined the dinner to explain the many features of the Capitol. Lady Liberty immediately captured my attention.

The librarian gestured at the magnificent statue. Lady Liberty stood high above us, looking across the room. The American eagle, a symbol of strength, flanks her on one side, wings flung open. On the other, a serpent snakes up a column, its jaws slightly parted, a manifestation of Sophia, the Greek goddess of wisdom. The librarian didn’t need to articulate the meaning of the Constitution in Lady Liberty’s outstretched right hand. And the symbolism is unmistakable—wisdom and liberty are intrinsically linked. More specifically, wisdom about our Constitution and the rule of law is the foundation for our liberty.

After drawing everyone’s attention to Lady Liberty, the librarian pointed out plaques embedded in the floor where eight former presidents took a seat before or after serving in Congress. John Quincy Adams sat toward the front of the hall. Adams is the only American president to be elected by the House of Representatives because of a tie vote in the electoral college. And yes, that vote of the House occurred in what is now Statuary Hall.

Adams is also the only person to ever win a seat in Congress after serving as president. In the House, we call that career move a promotion.

I often wonder whether Congress should rename Statuary Hall after John Quincy Adams. So much of his life, and even his death, occurred in this hallowed hall. And he had a tremendous impact on America’s history. The son of our second president, John Adams, he was a thoughtful and committed leader in the fight to end slavery. In 1836, several members of Congress representing southern states passed a “gag rule,” mandating that the House of Representatives automatically table any petition to abolish slavery. Adams fought against that gag rule for a full eight years, before finally helping to repeal it.

When I give tours, guests are always delighted to learn about the special architectural feature in the old House chamber that gave the wily Adams an advantage over his adversaries. The ceiling of the room is designed to resemble ancient Greek meeting places, and its curved shape allows a listener on one side of the room to eavesdrop on a conversation on the opposite side of the room. The architectural feature has such a profound effect that even a whisper can be heard across the room, at the spot where Adams sat. Adams used this feature to his advantage when the pro-slavery Democrats were scheming to silence his abolitionist efforts.

Another famous member of the House had the same passion to abolish slavery. Abraham Lincoln sat at a desk in the back of the chamber from 1847 to 1849, as a congressman from Illinois before he became president. I am often overcome by the thoughts of how past members in this chamber, appropriately called the people’s chamber, have tenaciously fought political battles on some of the weightiest topics our nation has ever considered.

Even with my busy travel schedule between Colorado and Washington, I make time to give tours as often as I can because the Capitol has a story to tell, and I want to give voice to that story. I always leave feeling inspired by our founders and our history, and ready to go back and fight the political and policy battles of the day. The Capitol building keeps me grounded in the Constitution and helps me remember our foundational principles.