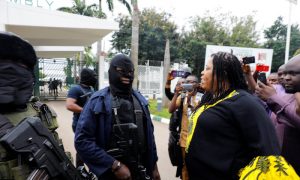 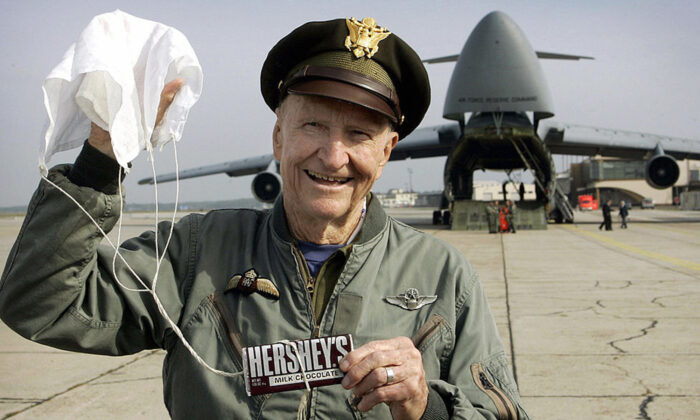 The ‘Candy Bomber’: How One Air Force Pilot Fought the Berlin Blockade

The Berlin Airlift remains one of the greatest Allied achievements of the Cold War, a moment where bombers were repurposed to drop large quantities of food and coal to a starving, freezing civilian population. But decades later, it wasn’t the essentials the bombers brought that Berliners remembered best—it was the candy.

For the young people of Berlin, whose childhood had been taken away from them by war, Gail Halvorsen, the Air Force bomber captain behind the drops of sweets whom they knew as “Uncle Wiggly Wings” and the “Chocolate Pilot,” came to be the symbol of hope for freedom and a better future.

While a bombed-out and battered Berlin was still recovering from the devastation of World War II, the grip of the Soviet Union on Eastern Europe was already tightening. As Winston Churchill observed in March 1946, “[A]n iron curtain has descended across the continent.”

Nowhere better exemplified the divide between the democracies of America, Britain, and France, and the totalitarian USSR than Germany’s capital. Divided in two, the city itself was stranded deep inside the Communist-controlled East Germany. The citizens of West Berlin were free but hungry and destitute, trying to rebuild their homes and lives.

Things became even bleaker when the USSR tried to get the Allies to surrender West Berlin by instituting a blockade in June 1948, which blocked road, railway, and canal access to the city. Despite the odds and difficult logistics, Allied planes managed to deliver over 2.3 million tons of supplies to the city over the next year.

While over 2 million Berliners desperately needed basic goods to survive, they also needed something more—the knowledge that they were not forgotten and would not suffer the brutality of Soviet occupation as the rest of Eastern Europe had.

The man of the hour was “a kid off the sugar beet farm in Utah,” as pilot Gail Halvorsen described himself in a 2014 PBS documentary, “The Candy Bomber: The Berlin Airlift.” On July 17, 1948, Halvorsen had completed a mission and wanted to film the area around the airfield. As he made a circle, he had a chance encounter with a group of about 30 German children massed outside the fence to watch the planes land.

These brave kids who had been through so much encouraged Halvorsen and other American pilots not to give up on their perilous missions, flying overloaded planes hundreds of miles behind enemy lines. The pilot remembers the children, who were between 8 and 14 years old, warning him of the difficulties the planes would have in winter. “But when that happens, don’t give up on us. We can live without everything we have to eat, if someday we have our freedom.”

Halvorsen was stunned by the maturity of these young teens. “These kids were telling me, an American, what freedom meant.” The pilot promised that he and his country wouldn’t abandon them in their time of need. But Halvorsen knew something was different about these kids.

As opposed to those he had encountered in his service all over the world, not one of them put their hands out for gum or chocolate, nor did they ask him for some. He could see how difficult their lives were and wanted to give them something but only had a couple of sticks of Wrigley’s Doublemint gum.

While he expected there to be a huge fight over who would get the gum, Halvorsen was “dumbfounded” to see them breaking the sticks into tiny pieces to make sure as many people as possible got some. For those who didn’t, pieces of the wrapper were passed around so at least everyone could get a smell.

He recalls telling the kids, “Come back here tomorrow and I’m going drop enough out of my airplane that if you’ll share it, enough all gum for all of you.” In order to identify his plane out of all those that were coming in, Halvorsen told them he would wiggle the wings to let them know their package had arrived.

Halvorsen realized that by sowing deliveries of candy into parachutes, he could safely drop them on the outside of the barbed-wire fence, where the kids could get them. Soon, his candy drops became as regular as coal. Thus was born “Operation Little Vittles,” which brought huge quantities of gum and chocolate to the impoverished children of Berlin for the rest of the airlift.

When one of Halvorsen’s candy bar packages almost hit a West German reporter who was doing a story on the airlift, his secret was out. Called before General William H. Tunner, the man in charge of the airlift, Halvorsen thought he would be in big trouble but was surprised to find that the positive publicity from the drops meant the Air Force was now encouraging them.

From there, the tiny gesture was transformed into a whole cottage industry, with the whole squadron getting involved in the candy drops. Halvorsen became a kind of international celebrity for his efforts and even managed to get the American Confectioners Association to donate a staggering 6,000 pounds (approx. 2,722 kg) of candy for the effort.

While it was the food and coal that kept Berlin going, Halvorsen believes that the candy won the hearts and minds of those whom the United States had recently defeated. The letters and gifts he received from Berlin’s children were “the indication of the change and the shift of the feeling [towards America]. It fully brought the West Germans into the Western camp.”

Halvorsen had a long and distinguished career in the Air Force and was even reunited with some of the children, now grown up, when in 1970 he became commander of Templehof Air Base. He has met many others who settled in the United States and continues to meet others whose lives he touched on his Facebook page.

Ultimately, the resolve of the American and British air forces and the bravery of their pilots defeated the Soviet Union, which had to acknowledge the failure of the blockade. It was lifted on May 12, 1949, and West Berlin remained an island of freedom and beacon of hope behind the Iron Curtain.