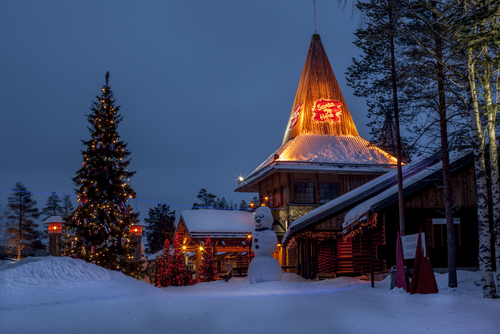 One of Santa’s villages in Finland. (Shutterstock)
Travel

The Business of Santa Claus in Lapland

A magical marketing gift
BY The Conversation TIMEDecember 20, 2018 PRINT

Christmas has enormous economic significance. As a regular and popular tradition, it lends itself to new ideas and innovation at a time of year when people expect to spend money. New businesses (and jobs) have emerged for party organizers, decorating services, and theme parks.

There is also plenty of economic activity going on behind the familiar festive scenes—because Christmas is not just about shopping—it is about the experience of Christmas.

Part of that experience of course is Santa Claus, himself an extraordinary success story in the world of marketing. As Christmas spending begins earlier every year, his image is everywhere—used to boost advertising, sales, and the seasonal spirit.

And it’s not just the image—we want to see him in person too. So his home is recreated in Christmas grottoes, allowing children to plead for presents in shopping malls, department stores, and winter theme parks.

People are even happy to travel considerable distances to meet Santa in his “real” faraway home. Festively-minded tourists fill planes to northern Finland to experience the magic of Father Christmas in an authentic setting, surrounded by snow, ice, and reindeer.

I have been researching this phenomenon in Enontekio, a small, remote and sparsely populated Finnish area about 186 miles north of Rovaniemi, the capital of Lapland. With claims to be the “true Lapland”, Enontekio is geologically and scenically different from the rest of Finland with particularly long, snowy winters. It is not connected with the country’s rail network, but has had an airport since 1980.

Due to its northern location, Enontekiö has the advantage of early first snow, but lacks accommodation capacity to grow. However, its small size and the fact that it is far from ski centers and touristic areas make the experience perhaps more peaceful and even more “authentic.”

And for one month every year, people and organizations come together to create an experience for tourists who travel from far and wide to experience an “authentic” Christmas. It’s the culmination of work by a range of businesses and entrepreneurs, agencies, and tourism boards. So how did it all materialize?

Like his appearance (the red suit and black boots were popularized by Coca Cola adverts), Santa’s geographical origins and home have long been argued over. The North Pole, Greenland, and Lapland all have a case to make.

Yet Lapland’s claim is fairly recent—a few decades ago, nobody considered this part of Finland to have anything to do with Father Christmas. Today, it is one of the top destinations for tourists around the world eager to visit Santa’s home.

Its favored place in the modern story of Christmas began in 1927 when a self-professed “good friend of Santa” called Markus, the host of a Finnish children’s radio program, revealed on air that Santa’s secret home was located near a hill on the Finnish-Russian border called Korvatunturi (it translates to English as “Ear Fell”).

To protect his actual hiding place, Santa began hosting visitors in nearby Rovaniemi, which gradually became known as Santa Claus Village, the capital of Finnish Lapland and the official hometown of Father Christmas.

In 1950 a special cabin was built there to host a distinguished visitor, America’s former first lady, Eleanor Roosevelt. The attention and publicity this visit created marked an important step in building Finnish tourism markets based on Santa Claus and the Christmas season.

On December 25 1984, the first Concorde flight from the U.K. landed with around 100 British tourists for a day trip to meet Santa in Rovaniemi. This monumental day meant the introduction of Christmas charter flights to Finnish Lapland, which have continued to operate each year since, growing in number and expanding to other nearby locations including Enontekiö.

Beyond the airport, the work of translating the myth into a material market network involves imagining, discussing, proposing, negotiating and contracting among a range of different businesses.

Safari tour operators employ the tour guides and elves. I did a few seasons as an elf myself from 2001 to 2003 to earn extra cash as a student. It was hard work, standing outside welcoming visitors in freezing weather (-40°F on some days), but at the same time very rewarding—people were so happy to meet Santa. (The Santas are often recruited from the U.K., because they are familiar with the cultural intricacies and toy trends of the huge number of British visitors.)

Entrepreneurs get involved in the spectacle, including reindeer and husky farmers, snowmobile renters, and drivers, and the snow castle builders. A wide range of resources and skills all come together in true Christmas spirit.

Of course, some elements of the myth are easier to come by (snow, coldness, a hut in the middle of the forest) than others (reindeer do not fly). The myth becomes reality, the details of the myth become economic facts, and the result, when the right conditions are in place, is a magically merry Christmas.

One of the reasons Lapland has become the ideal destination for Christmas tourism is the reliability of snowy scenes. But nature makes no guarantees. After some unusually warm weather, 2018 has had a problem with the snow. Unfortunately, postponing Christmas to January is not possible, so fingers have been crossed for the white stuff to arrive.

But whatever the weather, Santa and his reindeer will be there working their magic, and Christmas will not be canceled.

Teea Palo is a lecturer in Marketing at Lancaster University in England. This article was originally published on The Conversation.