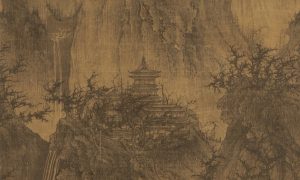 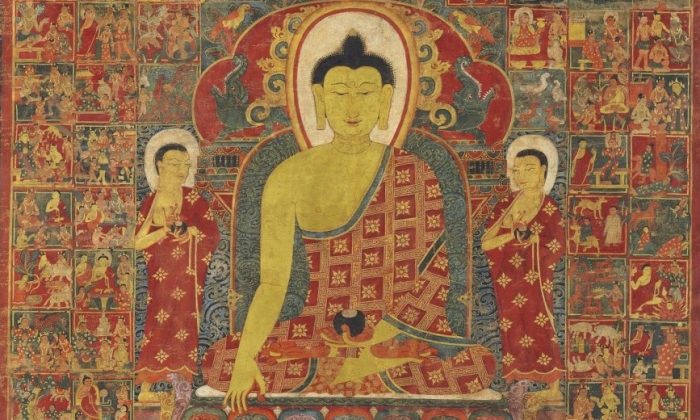 The ancient city of Vaishali, India, was home to 500 blind people. Because of their disability, they couldn’t work for a living and had to beg for food. They suffered from discrimination on a daily basis.

The blind people heard that Prince Siddhartha (also known as Shakyamuni) had become a Buddha, and they were full of hope. They believed that the Buddha had the ability to relieve people of all diseases, troubles, and sorrows, and they sincerely wished to follow the Buddhist path to cultivate their wisdom and moral character so that they may be worthy of this mercy.

After some discussion, they decided to find a way to meet the Buddha in person. The leader of the group suggested that they take the initiative to visit the Buddha rather than wait for the Buddha to come to them. They hired a guide to lead them on the journey since they could not see.

The blind people trailed behind their guide, hand in hand, forming a spectacular long line that twisted and turned. Although the trek was arduous, with faith in their hearts, the more they walked, the brighter their spirits and the lighter they were on their feet.

Then the group reached a swamp that they had to cross before reaching the Kingdom of Magadha, where the Buddha lived. Seeing the danger ahead, the guide became afraid, and with no regard for the safety and well-being of the blind people, he stole their money and deserted them. Oblivious to this, the blind men waited and waited in vain.

The leader then heard the sound of water and asked everyone to walk in that direction.

Right at that time, he heard the angry voice of a farmer. “You beasts, are you blind? All my seedlings are being trampled to death!” cursed the farmer.

“Oh, heavens! We’re so sorry. We truly cannot see. If we could see, we would never trample on your seedlings,” the leader deeply apologized. “Ah! Please be kind and have mercy on us. Please tell us how we can find our way to see the Buddha. Our money has been stolen, but we will certainly compensate you for the seedlings later on.  I promise.”

Feeling bad for the plight of the blind people, the farmer sighed and said, “It is all right. Just follow me. I will take you to the Buddhist temple in Shravasti, where the Buddha is.” The group rejoiced and thanked him over and over again.

The farmer indeed brought them to the temple as promised, and the blind people were excited to finally reach their destination. But they were disappointed to be informed by the abbot that they had come too late, as the Buddha had already returned to Magadha.

The group then made the difficult journey to Magadha, overcoming hardships of all kinds. Once there, however, they learned that the Buddha had gone back to Shravasti.

Despite their exhaustion, they were determined to see the Buddha, so they turned around and went back to Shravasti. They did not expect that the abbot of the temple there would once again tell them that the Buddha had returned to Magadha, but that’s what he did, though with great sympathy.

These dedicated people vowed that they would never go home without seeing the Buddha. In the end, they traveled back and forth seven times. The Buddha saw their faith and devotion, and when they arrived back at the temple in Shravasti for the seventh time, the Buddha was there waiting for them.

“Oh, Great Buddha! Please give us light! Let us see the Buddha’s magnificence!” implored the group. All 500 of the blind people knelt down and kowtowed, paying the highest form of respect to the Buddha.

Seeing their hearts, the Buddha said: “You are so sincere and have traveled so many long journeys, unwavering in your belief and determination. I will grant you light.”

Immediately, all 500 people were able to see. They thanked the Buddha for his immeasurable grace. They all became diligent disciples of the Buddha and reached the level of Arhat at the end of their cultivation.