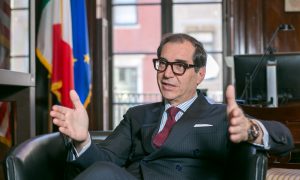 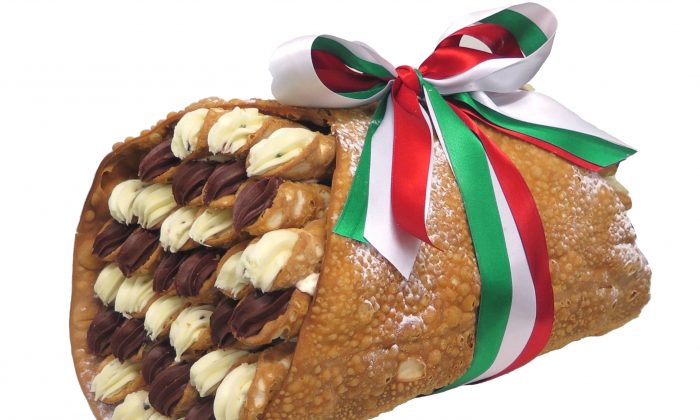 Mezzapica’s ‘Giant Cannolo’ can fit up to 60 smaller cannoli inside. (Courtesy of Mezzapica Cakes)
Australia

The Big Cannoli of Leichhardt

AUSTRALIA—Inner Sydney suburb Leichhardt has been known as ‘Little Italy’ since the middle of the 20th century and one place that is clearly upholding that tradition is local café and pasticceria Mezzapica.

As reliably Italian now as the day it opened some 60 years ago, it was started by Sicilian Angelo Mezzapica and his wife Carmela soon after they arrived in Australia in 1952.

Angelo had trained in Italy, not only with local pastry chefs, but also Swiss pastry chefs. On opening in Leichhardt, he soon became known for his wonderful Italian pastries, biscuits and cakes.

Mezzapica is now owned by Angelo’s nephew Frank Portelli who has continued the tradition with beautiful continental cakes, Sicilian pastries and Neapolitan biscuits. Mezzopica is so legendary in the area, its storefront is even heritage listed!

“We get generations of Italians coming here, the kids came here with their mums and dads, and now they are parents bringing their kids,” he told the Epoch Times.

Andre says he is the all-rounder in the business doing everything—except the baking. That he leaves to his father who learned from the source when he was apprentice to uncle, Angelo.

“We are famous for cannoli,” said Andre, “particularly with the ricotta filling.”

Mezzapica cannolis are in such demand they now do a ‘Giant Cannolo’ crammed with smaller chocolate and ricotta cannolis, for party events.

The quality of ingredients is one of the reasons Mezzapica has maintained its success says Andre. While the family focuses on sourcing fresh local ingredients where they can, they are also unafraid to bring in the best from overseas when needed. This includes Italian marzipan, particular candied fruits and some types of flour.

While Portelli senior makes it clear he is not interested in fads, he also knows the business cannot stand still. Andre says he continues to pick up ideas from Italian trade magazines and is open to changes that suit the times. They now produce red velvet cakes and marbled mud cakes alongside a range of items that cater to gluten and dairy free requirements.

More Cakes in the Mix

One area that is particularly expanding is the cake business. Mezzapica has long produced everything from liqueur soaked continental sponges, to chocolate mudcakes and chocolate choux-towered croquembouche. They have also provided cakes, not only for celebrations in the local community, but for the broader city region.

Increasing demand for cakes, however, particularly wedding cakes, has inspired the family to open a new shop across the road in the coming months. With three cake designers in the team, the new premises will allow Mezzapica to tailor cakes to any occasion and any ethnicity.

“There is no occasion we cant make a cake for,” Andre says.

Mezzapica can also cater for any occasion. Andre’s brother runs the adjoining Mezzapica café famous for its Italian dishes. As adaptable as the rest of the family, the café is also known for its breakfasts and good Tobys Estate coffee.
No wonder Mezzapica is an institution!!