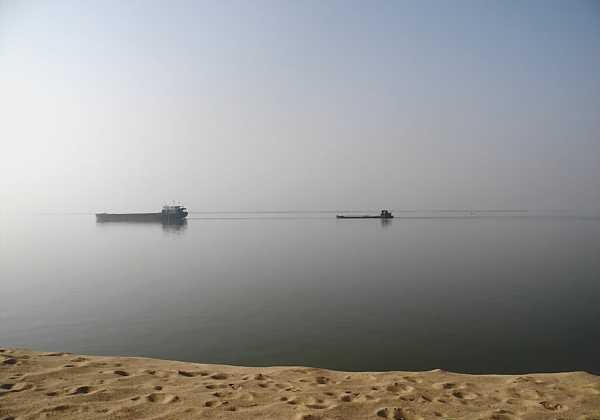 The Bermuda Triangle of the East Mystery Continues

Ships sink in the Laoye Temple waters. Lots of them. This is a phenomenon that has been happening since ancient time, thousands of fishing boats, cargo transporters, and military vessels have been lost. Many go down with no apparent cause at all, they are just sucked down into the abyss below. This area on the east flank of Poyang Lake in China’s Jiangxi province is also known as the “waters of death,” “devil horns,” and the “Bermuda Triangle of the East.” Some say that the ships are sunk by abnormal wind patterns, others say that it’s because of whirlpools, some say it’s magnetic fields causing lightening strikes, while others reach more ominous or mysterious conclusions. Whatever the case, these are some of the most treacherous waters in the world.

Laoye Temple sits before a 24 km channel of water which connects Poyang Lake, the largest freshwater lake in China, with the Ganjiang River’s exit point. It sits between 28.22′ – 29.45′ degrees N latitude, roughly the same as that of the Bermuda Triangle in the Caribbean. To go from the Yangtze River to the Pearl River Delta by inland waterways, you go travel through Poyang Lake. To get through Poyang Lake you must go through this channel, which tapers down from a width of 15 km to 3 km directly in front of the temple, is the only way to get to get through here. Likewise, these notorious waters have been a major transport route since the days of China’s ancient porcelain trade.

On April 16, 1945, a Japanese transport ship called the Kobe Maru was ferrying more than 200 troops through the Laoye Temple waters on a calm bright and sunny day. It’s hold was full of plunder — antiques, paintings, gold, silver, and pearls. Suddenly the weather turned foul, and a huge tide rose up, breaking the ship into pieces and sucking it down into the depths of the lake. As soon as the ship was gone the weather cleared, the winds ceased, and the sun again shone as if nothing had happened. The Japanese navy immediately sent a rescue team under the command of Colonel Tomohisa. The lake was only 30 meters deep at that time of year, and seven divers went down looking for the lost ship and its treasure. The Colonel was the only man to return. Though he did so a very changed man. The reports state that he was thereafter unresponsive, suffered severe memory lost, and was subsequently carded as insane.

In the summer of 1946, after the Japanese had been expelled from China and the war was over, the Nationalist government of China invited the accomplished American diver and salvage expert, Edward Boer (or Bolton, depending on the source), out to Poyang to find the remains of the Kobe Maru. Treasure ships may be lost but they are rarely forgotten. The spoils were sitting just 30 meters below the lake’s surface, and by all accounts should have been easy picking. But after months of diving and the loss of two divers the search revealed nothing. Boer (Bolton) himself declined to speak about what had transpired until he published the account in the United Nation Environment News 40 years later. He said that during a dive his team was assailed by a dazzling bright light and a high-pitched screeching sound coming from the water’s depths. The lake, he claimed, felt as though it was shaking, and he was pulled into a vortex. He momentarily went dizzy and lost consciousness, but was soon startled awake upon striking a reef. He hung on helplessly and watched as a gyrating bright light on the lake bottom sucked in the other divers. They were never seen again.

In a thirty year period between the early 1960s and the late 1980s over 200 ships have gone down in the Laoye Temple waters, leading to the deaths of 1,600 people, and leaving just 30 survivors — all of whom are said to have subsequently lost their minds.

In the late 1970s, the people of this region built three dams in Poyang Lake. The one they built near Laoye Temple was 2,000 feet long, 160 feet wide, and towered nearly 50 feet above the water’s surface. It disappeared one night without a sound or trace.

In the 1980s, the PLA’s navy sent an expedition out to Laoye Temple to see what they could find. They came back empty handed. Unsatisfied with this outcome, Captain Shen Dahai, chose to make one final dive. He did not return. Reports state that his body was found the following day in Changba Shan Lake, which is 15 km away from and apparently not connected to the waters he dove into.

On August 3, 1985, thirteen cargo ships, including one that weighed 2,000 tons, were crossing through the Laoye Temple waters. A flash storm struck, and all the boats went down, one after the other. Recovery teams were unable to find even a scrap.

Boats still go down in the Laoye Temple waters. The abbot of Laoye Temple tells a story of how on March 5,2010, a calm and sunny day, a 1,000-ton boat sank right off the shore. Nobody has yet discovered the cause.

“I remember one day in the winter of 2001,” a local sailor named Wang Fangren told the Epoch Times, “we were in the middle of the lake. At first everything looked fine but suddenly the weather changed abruptly. The wave was so strong that our ship was unable to move closer to the edge of the lake. Then suddenly one of the sand-carrying ships sunk.”

“There isn’t a single year that has passed without a shipwreck, and efforts to salvage the wreckage have all failed,” said a local villager.

There is also a legend. In 1368 Ming Emperor Zhu Yuanzhang fought a major and decisive battle against his Han rival, Chen Youliang. In terms of the amount of combatants, it may have been one of the largest naval battles in history. At the onset Zhu was losing. He needed to cross the lake but was caught on the opposite side of the Han blockade. Suddenly, a great turtle surfaced and ferried him to the other side on its back. Zhu went on to become the undisputed emperor, and the first thing he did was build Laoye Temple as a memorial of the event. There is a statue of a turtle at the entrance to the temple, and some people say that it’s the spirit of the turtle that helped Zhu that sinks the ships. While others claim that it’s the ghosts of the sailors who died in that ancient battle.