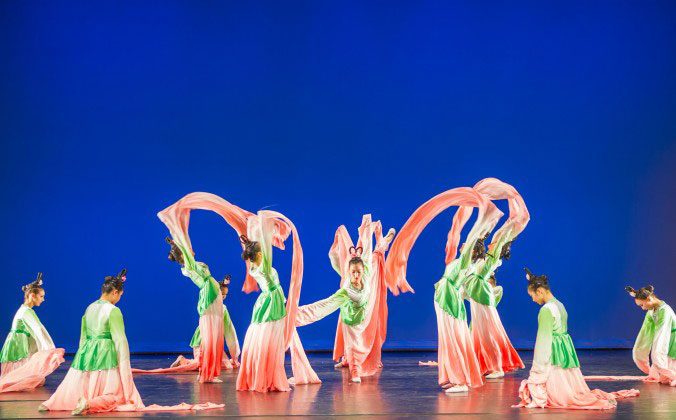 The Beauty of a Fei Tian Dance Recital

From floating water sleeves and a zesty Mongolian dance, to mischievous little scholars and Monkey King action, students from the Fei Tian Academy of the Arts California brought refreshing classical Chinese dances to the audience at their end-of-year recital.

All the students performed at the recital. There were 25 programs, including dance, choral, and instrumental performances. In addition to classical Chinese dance, the students also performed Mongolian, Miao, and Dai ethnic dances to showcase various ethnicities from China.

The Shen Yun website states: “Classical Chinese dance has its own set of training methods in basic skills and has strict training in both physical expression and specific postures. It also involves learning combinations of leaps, turns, flips, spins, and other aerial and tumbling techniques. It is a vast and independent system of dance.”

Ben Harrison, the director of Adda Clevenger, said that Fei Tian Academy of the Arts has a coherent education approach—that arts and academics can complement each other.

The students won a salvo of applause whenever they performed difficult tumbling techniques.

Students said there is no “perfect” in learning classical Chinese dance, but only “better.”

Meranda Hui, a student from Fei Tian California said, “It’s always a matter of improvement. No matter how well you do a technique, there’s always a way to improve it.”

Parents are proud to see children improve in a short time when attending Fei Tian, in dance and Chinese literacy.

According to the Shen Yun website, “China’s deep cultural traditions are contained in classical Chinese dance, allowing its movements to be richly expressive, such that the personalities and feelings of characters can be portrayed with unparalleled clarity. It is therefore capable of depicting scenes from any time period, whether ancient or modern, Eastern or Western, in a strikingly vivid way.”

Parent Summer Zhang said she is happy to see that her son, who performed as a little Monkey King in the recital, has learned so much in just one semester, and is able to perform onstage.