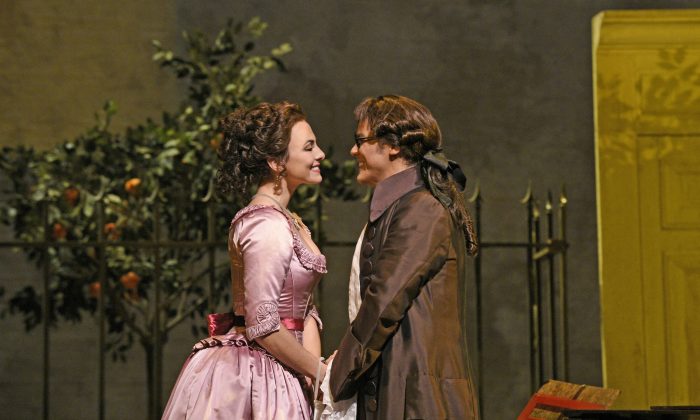 ‘The Barber of Seville’ Geared to the Kids at the Met

NEW YORK—Each year during the holiday season, the Metropolitan Opera puts on an opera aimed at young children. The opera is performed in English in an abridged version. In recent seasons, the operas have been “Hansel and Gretel” and “The Magic Flute.” This year, the Met is putting on Bartlett Sher’s production of Gioachino Rossini’s 1816 “Il Barbiere di Siviglia” (“The Barber of Seville”). J.D. McClatchy prepared the English translation.

Giuseppe Verdi once called “The Barber of Seville” “the finest opera buffa in existence.” The audience, especially the children, seemed to agree. If anything, the performers mugged more than their counterparts did when the full Italian version ran a couple of seasons ago.

The opera was first performed in the Met’s very first season (1883–84) and has lost none of its luster.

The story, adapted from the French play by Beaumarchais, deals with a beautiful young woman, Rosina, who is under the control of her guardian, Dr. Bartolo. The pompous old man wants to marry his ward.

Meanwhile, she is being romanced by Count Almaviva, who appears in a series of disguises. Rosina thinks he is a poor student named Lindoro. He has already won her heart with his singing and good looks, when she spotted him from her balcony.

Figaro, the title character, assists the Count in his effort to win Rosina. Almaviva arrives at Bartolo’s house pretending to be an inebriated soldier with orders to be billeted there. Bartolo tries to claim he is exempt from the requirement that he house soldiers, but during the commotion that results when the civil guard shows up, Almaviva passes a note to Rosina.

In the second act, the Count pretends to be Don Alonso, a music teacher and student of Basilio. He claims that Basilio is sick and offers to give the young woman her music lesson. He uses the letter from Rosina to Lindoro to prove his bona fides to Bartolo.

When the Count and Rosina get together, they express their mutual love. Figaro arrives to shave Bartolo and manages to steal the key to Rosina’s balcony. Basilio appears in good health, but he is convinced to go along with the ruse that he has scarlet fever when he is bribed by the young lovers. Bartolo, fearing the romantic competition, plans to marry Rosina that evening. When he shows his ward her letter to Lindoro, she feels that the young man has betrayed her. She then admits that she had arranged to elope with the student. When Bartolo leaves to obtain help from a group of soldiers, Almaviva mollifies Rosina by revealing his true identity. By the time Bartolo returns, Rosina and the Count are married, and the old man admits defeat.

Director Bartlett Sher has come up with some delicious comic bits, beginning with some stage business during the overture by Dr. Bartolo and his dour servant Ambrogio. Figaro arrives on a wagon pulled by a bevy of beauties.

The baritone originally scheduled to play Figaro, David Pershall was ill and was replaced by Canadian Elliot Madore, who was a full-voiced and swaggering Figaro. He delivered a bravura rendition of the famous tongue-twisting aria “Largo al factotum.” (When Rossini is performed in English, his influence on Gilbert & Sullivan becomes apparent.)

Mezzo-soprano Ginger Costa-Jackson made her lead role debut at the Met during this run as Rosina. The singer, who has an Italian mother and an American father, looks and sounds beautiful and has a flair for comedy. Hopefully, the Met will bring her back in “Carmen,” which she has performed to praise elsewhere.

Ohio native Taylor Stayton is a rising star bel canto tenor, who has been playing Almaviva and had previously subbed effectively in “Anna Bolena.”

Colombian bass Valeriano Lanchas is vocally and physically well-suited to the role of Dr. Bartolo, though he would probably sound more comfortable singing in Italian rather than English. The non-singing Ambrogio is played by dancer Rob Besserer.

Parents should keep the Met’s Christmas/New Year’s shows in mind for next season, but they should make sure their children are able to sit through a two-hour opera.