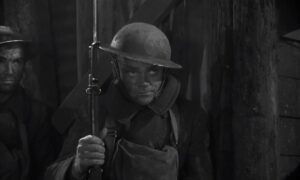 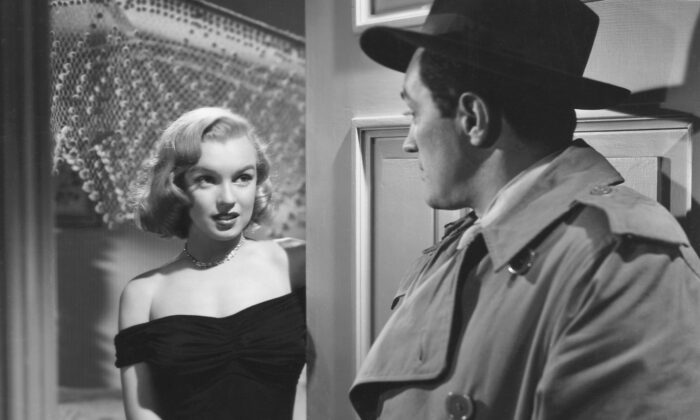 Marilyn Monroe in the film noir classic "The Asphalt Jungle." It was her big break into Hollywood. From the May 1961 issue of TV-Radio Mirror. (Public Domain)
Film Reviews

Popcorn and Inspiration: Films that uplift the soul
By Tiffany Brannan
Print

“Film noir,” the classic genre of crime and mystery films, isn’t usually considered uplifting. However, these films can be very entertaining and sometimes, surprisingly, inspiring. One such film is “The Asphalt Jungle” (1950).

Each man wants the money for a different reason, and each has a different grudge. Ciavelli supports a wife (Teresa Celli) and baby, who are unaware of his dishonesty. Gus is a hunchback who runs a bar and protects petty criminal Dix. Dix was raised on a Kentucky farm, which his family lost after his father died. He started stealing to bet on horse races, hoping to earn enough money to buy back the farm. Emmerich is a successful lawyer who, unknown to anyone, has gone bankrupt. He has an adoring invalid wife (Dorothy Tree) but maintains a mistress (Marilyn Monroe).

The plan becomes complicated when Emmerich agrees to finance it, although he is broke. He tells private detective Bob Brannom (Brad Dexter) his double-crossing scheme. He will convince Cobby to supply the initial $50,000. Then, promising to “fence” the jewelry, Emmerich will persuade the crooks to give him the jewels, go abroad, and sell them to start a new life. Brannom agrees to help for half of the profit.

The crime is committed, but who will escape?

What Is Film Noir?

The term “film noir” is used primarily to describe 1940s and ’50s black-and-white films with dark subjects and cinematography featuring dark alleys, dimly lit streets, and other nocturnal backdrops for the often-criminal characters’ shady activities. “Noir,” French for black or dark, presumably applies to films with such moral coloring.

French critic Nino Frank is often credited for coining this term in 1946. However, the term was used earlier. William Ahearn revealed in “The Death of Film Noir: On the Streets of Paris”  that some French 1930s films were called film noir. For instance, in his 1938 review of “Le Puritan,” François Vinneuil called it “the film noir, plunging into debauchery and crime.”

Does “plunging into debauchery and crime” define American film noir? Many said that because of the crime and violence in these American 1940s and ’50s films, the films had flouted the Motion Picture Production Code. The Code served as Hollywood’s guidelines for film decency that were strictly enforced 1934–1954 by its director Joseph I. Breen and his staff, according to Thomas Doherty’s “Hollywood’s Censor: Joseph I. Breen and the Production Code Administration.”

However, not every black-and-white crime movie is a film noir in the sense of its morality. In fact, the classification is based merely on opinion, since classic films weren’t intentionally made as such. This term didn’t reach America until the mid-1950s or later.

As film scholar Chris Fujiwara writes, earlier films’ makers “didn’t think of them as ‘films noir’; they thought they were making crime films, thrillers, mysteries, and romantic melodramas. The nonexistence of ‘noir’ as a production category during the supposed heyday of noir obviously problematizes the history of the genre.”

It seems that film noir is a misleading, ambiguous term that is applied too eagerly. One should judge films individually, not try to label them.

If any movies are films noir, “The Asphalt Jungle” certainly is. It is frequently cited as an example of the genre’s criminal focus, for which people call noir notorious Code-violators. However, the Production Code did not forbid crime in films. It only forbade its glamorization, depictions likely to inspire imitation, and scenarios that created sympathy against the law. The Code, written by Martin J. Quigley and Father Daniel Lord in 1930, states: “The sympathy of the audience should never be thrown to the side of crime, wrongdoing, evil, or sin.”

This film properly handles its characters’ crimes and sins. They never look right or justified. The climactic jewel theft is too complex to be imitated, and the criminals who execute it are unsympathetic. Calculating Riedenschneider’s weakness is lust for beautiful, young women, whom he obviously uses for selfish pleasures. Safecracker Ciavelli’s family makes him less likeable, since his crimes endanger them. Emmerich’s infidelity is despicable, and he is so corrupt that he plans to betray his criminal cohorts and leave both his wife and mistress. Cobby, Gus, and Brannom are greedy, bitter men just out for themselves.

Only Dix inspires sympathy. His sad past and determination to buy back his home are very relatable. While Cobby and Ciavelli think he is just a hooligan, Doc realizes that he is a man of honor. One Code passage applies to Dix:

“Sympathy with a person who sins is not the same as sympathy with the sin or crime of which he is guilty. We may feel sorry for the plight of the murderer or even understand the circumstances which led him to his crime: We may not feel sympathy with the wrong which he has done.”

While we wish Dix had found happiness, his crimes doom him. As the film ends with three criminals imprisoned and four dead, crime clearly doesn’t pay.

Police Brutality and the Jungle

“Police brutality,” a phrase frequently used in current headlines, is depicted in this film. Crooked cop Ditrich constantly neglects his duty by ignoring crimes for bribes. He sets the plot in motion by not reporting his discovery of Doc, allowing him to plot the robbery. Later, he pressures Cobby to confess the crime’s details. Ditrich won’t accept bribery now, seeing his chance to become a hero. Unable to intimidate Cobby with words, Ditrich slaps him repeatedly, beating him into sobbing submission.

Under the Code, corrupt officials required punishment. Therefore, Ditrich goes to jail. Afterward, Police Commissioner Hardy (John McIntire) tells reporters that the job’s dirt corrupts perhaps one out of a hundred officers. “The other ninety-nine are honest men trying to do an honest job.”

One policeman’s violence against a criminal should not discredit all police. Hardy switches on police radios, saying: “We send police assistance to every one of those calls, ’cause they’re not just code numbers on a radio beam. They’re cries for help. People are being cheated, robbed, murdered, raped. And that goes on 24 hours a day, every day in the year. And that’s not exceptional; that’s usual. It’s the same in every city in the modern world. But suppose we had no police force, good or bad. Suppose we had [switching off the radios] just silence. Nobody to listen, nobody to answer. The battle’s finished. The jungle wins. The predatory beasts take over. Think about it.”