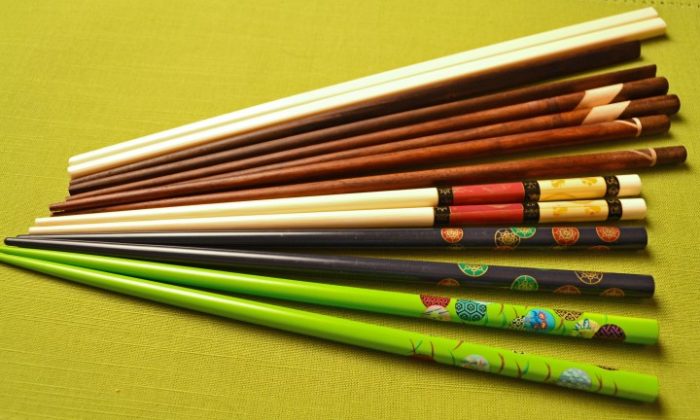 Pictured are a few styles of chopsticks. From front to back, the first three are Chinese-style, tapered and painted bamboo chopsticks; the next three are Japanese-style, stained wood chopsticks (third pair has flat triangular ends); the white pair are made of melamine and are flat and square at top with blunt-tip ends. Although made in China, they are used throughout Asia, especially Vietnam. (Vanessa Rios/The Epoch Times)
Food & Dining

Legend has it that chopsticks have been around for over 5,000 years, yet the exact date of their first appearance is not actually known.

According to one of the most famous legends in China, during the reign of Emperor Shun, a soldier named Da Yu was ordered to channel a river because it was causing massive flooding in the area. Da Yu swore that he would carry out the mission to its end and thus diminish the problem.

Once underway on his mission, Da Yu docked on a small island. Taken by hunger, he took a pot out and began to cook some meat. As the food was boiling, he realized he had nothing to remove the food from the hot pot, and knew that using his hands he would get burned.

Normally, boiling pots of food had to be given time to cool down before being eaten, but Da Yu wanted to devote as much time as possible to the task he had been given.

Da Yu had the idea to cut two sticks, and he used them to pull the meat from the boiling pot. By doing so, he was able to eat quickly and get back to work.

His subordinates saw the dexterity of Da Yu’s hands while he ate; how he did not worry about getting his hands burned or dirty; and how he did not have to wait for the pot to cool off before eating. Everyone began to imitate him, enabling them all to eat in a short amount of time, and then resume their mission.

There are a few protocols to follow when dining with chopsticks.

For instance, standing up chopsticks in a rice bowl is seen as disrespectful and insulting. This is because in traditional Chinese funerals, incense is lit and stuck directly into ancestral offering bowls. So it is like wishing “death to the cook” or to the person with whom you are eating.

Another example of bad manners and disrespect when dining is tapping your bowl with chopsticks. This is the method street beggars use for attention and asking for food or alms.

When using chopsticks, one should keep etiquette in mind.

For example, the sticks should have minimal contact with the mouth. It is very rude to suck the ends of the chopsticks.

While at the table, if there are communal serving plates with their own serving spoons and forks, do not use personal chopsticks to serve yourself. It is also not permissible to stir the food or turn the plate to get a better selection.

If there are no serving utensils, then it is allowed to use personal chopsticks. For hygienic purposes, use the other end of the sticks, not the side that goes into the mouth.

When eating Chinese food, knives are not used at the table any time. Unlike in the West, the Chinese, and many other Asians like Japanese, Koreans, and Vietnamese, will cut ingredients into bite-sized portions when preparing dishes. Perfect for when using chopsticks!

Moreover, Chinese culture has traditionally considered the use of knives and forks at the table to be a barbaric act. Puncturing and cutting meat at the table is seen as violent, likened to how knives were used as weapons in war in ancient times. Since those times, such etiquette has become a custom.

A curious fact not widely known is the distinction between Chinese, Japanese, Korean, and Vietnamese chopsticks.

Chinese use long wooden sticks—although in ancient times they were made of ivory or silver—and are tapered to a rounded tip.

Japanese chopsticks (hashi) are long and narrow with a pointed end. There is also a special type of chopsticks found in Japan called saibashi, which are much longer, and are used for cooking and serving food.

Korean chopsticks are short and usually made of metal—but also found in wood—and are tapered to a blunt end.

Finally, Vietnamese chopsticks are medium in length, flat, and taper to a blunt end.

It takes practice to be a pro at using chopsticks. It involves a technique that requires agility, skill, and fast fingers.

First, put one chopstick between the palm and thumb, using the ring finger to help hold the bottom of the stick.

The chopstick is held down by the thumb, while being held up by the ring finger, creating a stable and balanced stick.

Use the tip of the thumb and index finger and the palm of the hand to hold the other chopstick—like a pencil—keeping the two ends of the chopsticks aligned.

Guide the top of the upper chopstick up and the bottom down to pick up food, using the chopsticks like tweezers.

One secret tip is to start out by holding the chopsticks at the midpoint, eventually moving toward the ends.

Be sure to keep the ends aligned, as doing so will make it easier to pick things up. To facilitate this, hold the chopsticks vertically, with one end lightly touching the table, and gently push them down or let them slip through your fingers until they line up. This is also a good way to help correct the position of the hand.

Shanghai chicken is a savory yet simple dish to eat while practicing the art of using chopsticks. Enjoy!

Mix soy sauce, sherry, sugar, salt, ginger, and pepper in a bowl, and put chicken into the marinade, coating the chicken well. Let stand for 1 hour.

Heat cooking oil in a wok or skillet on medium-high heat. Add mushrooms and onions and sauté until nearly well-done. Remove ingredients from oil, and set aside.

In the remaining oil, cook marinated chicken on high heat for 10 minutes, until cooked. Then lower the heat and cook covered for another 10 minutes.

Add mushrooms, tomato pureé, and peas. Heat all ingredients together for flavors to meld, about 5 to 8 minutes. Serve immediately. Can serve with steamed white rice.