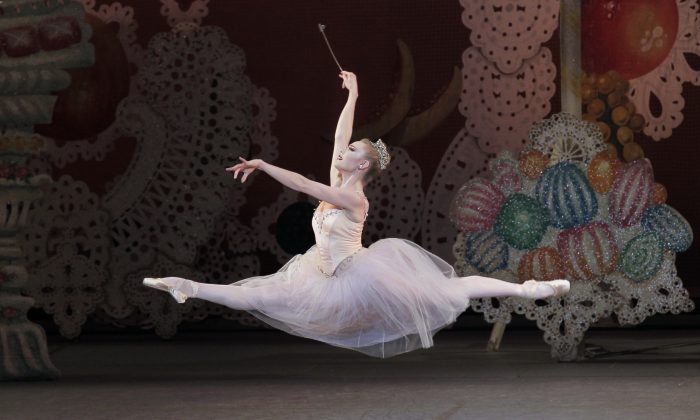 NEW YORK—Sara Mearns is in constant conversation with her body. She’s intensely aware of her every step, turn, extension, leap, jump, landing, gesture, and expression. Every millisecond of dancing requires every cell of her body to be fully committed.

It’s a rare privilege to see one of the most celebrated ballerinas of our time up close on a day like any other. In mid-November as she rehearsed sections of the very physically demanding roles of Dewdrop and the Sugarplum Fairy in “George Balanchine’s The Nutcracker,” she sweated and panted. The sound of her shoes on the studio floor was actually audible. She counted or hummed as she ran through the steps, remembering a sequence she has danced many times before.

In the middle of her solo rehearsal, she walked toward the mirror to take a good look at her reflection. Catching her breath during that brief pause, she seemed to be strengthening her resolve—giving herself a pep talk. Then she continued running through a part of Dewdrop’s dance.

At the end of the rehearsal she wrapped up her torso with a big scarf and put on a sweatshirt to stay warm.

“Sometimes your mind is telling you, ‘No I can’t get through this,’ but you actually can and your body can do it if you just push it that much further,” she said.

Since joining New York City Ballet in 2004 and becoming a principal in 2008, Mearns has been performing main repertory dances for over a decade.

“I know exactly what I have to do on stage, so rehearsal in the studio, it’s just running it and mentally not stopping,” she said.

Even though she has performed “The Nutcracker” so many times before, she was still looking forward to dancing again the “Waltz of the Flowers”—one of the most iconic, and most easily recognizable parts of the ballet—this holiday season.

“It’s big dancing, flying all over the place … just beautiful, sparkly, happiness, and joy … the whole time,” she said. Dewdrop is “definitely one of the most fun roles out of the Balanchine women’s repertoire,” she said.

All for That Moment on Stage

Her down to earth demeanor, her sweating and panting during rehearsals is so overt, but on stage it’s as if she turns into a different person. On stage her dancing looks effortless.

All the repetition during hours of rehearsals comes to a stop, to bear fruit for the very brief time of the performance. On stage all her expressivity is released through every pore of her body, creating an alchemy that draws the audience in, enthralled.

Her stage presence is riveting, her passion palpable. When she danced Odette and Odile in the latest New York City Ballet production of “Swan Lake” in September, the whole audience seemed to sigh and swoon in wonder. Mearns sparkles indeed.

The physicality and mental concentration required for her to create that magic is the result of a bewildering amount of dedication, strength, and forbearance. She dances over 10 hours a day, six days a week.

She said she’s motivated by a desire to achieve perfection. But even if perfection may be impossible to reach because the bar can always be raised, what ultimately motivates her is sharing her passion and the magic created on stage.

Videos cannot convey the ephemeral quality of the live performance. Wowing the audience involves having something meaningful to express from the inside, something that can only be experienced and seen live.

“What you are seeing in front of you is live, in the moment, and it will never happen again,” Mearns said. It is part of what she finds so special about performing.

Every ballerina has her own musicality and strengths. For Mearns the artistry comes easily.

“I’m just an emotional person anyway, so I really don’t have to work on that, but on the physical, athletic side of me, I have to really work, and work, and work to be confident on stage,” she said.

Even when she’s having a bad day or her body may be hurting somewhere, the moment when she steps on the stage, none of that matters. She found it hard to explain in words that transitory moment. She hears the music, feels the lights, the atmosphere, and the audience. As a principal carrying the story of the entire ballet, all of her hard work is focused on expressing the character she’s performing. “You just step into this kind of mystical, magical place,” she said.

“Swan Lake” has been Mearns’s favorite ballet since she was 10 years old, and the first ballet she danced as a principal when she was 19.

“I really know how to go to that extreme emotional place with that character and I know exactly what she is going through every moment of that ballet. So if you don’t understand what she going through in the second act when she first meets the prince, you are not going to feel what you feel at the end when everybody is crying and you are completely devastated. You are at that emotional peak of everything,” she said.

Mearns has performed in “Swan Lake” for 10 years. This year it was a much different experience for her. Her coach Albert Evans passed away in the summer.

“It was a very surreal experience. … Also I’m a different person, I’m older, my body is different, all of that, so it was even more emotional for me this time,” she said.

Ballerinas are like professional athletes, but have to have artistry on top of it all. “Football players or tennis players don’t have to look pretty, but we have to look beautiful until the last moment,” she said.

Like tires for a Formula One racecar that barely last one race, her handcrafted bespoke pointe shoes last three rehearsals, at most.

Ballet is a high-risk athletic art. Although she takes every precaution to prevent injury, still she could not have anticipated that the shoe on her turning and jumping foot would bust open in her first entrance in “The Nutcracker” on Nov. 27. She had no support on that foot for the entire performance of Dewdrop.

The next day on Instagram she shared a photo of her feet standing on the beach at the ocean’s edge, and wrote: “Thinking healing thoughts today, the repercussions and pain from my busted shoe on Friday night were much more than expected. Will be back next week!” On Dec. 3, to the delight of all her fans, she was on stage again dancing effortlessly.

It was a minor set back compared the eight-month hiatus she had to take a few years ago after a back injury.

Yet Mearns is realistic and positive. At that time she said she realized she had been in a bubble for too long.

“I was younger, I didn’t know any better, I didn’t know anything different, and obviously ballet is my life, but I was getting too wrapped up in it and too sucked into my own problems there so, this [time away from the company] gave me a release to go out in the world and actually have dinner with friends and go to concerts, listen to music, and see theater, and actually do things. … I just became a real person again,” she said.

She wouldn’t wish injuries to happen to anybody, but if it does happen she said, “It might be the best thing that’s ever happened to you.” She had more time to be an audience member herself, to experience the other side of the stage.

Reflecting on the performing arts Mearns said, “Sports might be more exciting because it’s a competition, or somebody wins, but I don’t think you’ll get the same experience as going to a live performance. Whatever you are seeing, that will never happen again. Seeing something beautiful, listening to something beautiful, it’s what feeds your soul … it’s the other side of life.”