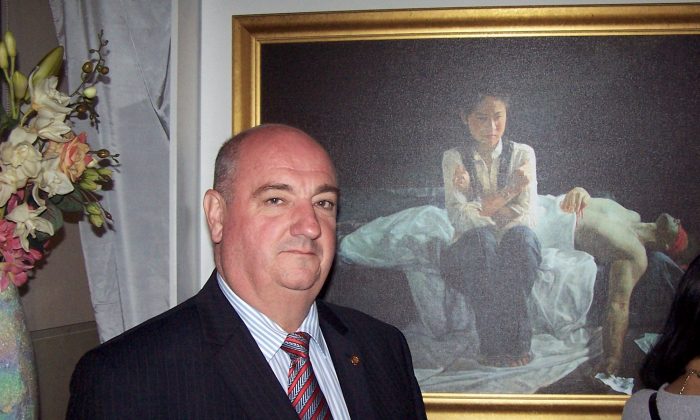 Australia: The Art of Zhen Shan Ren on the Gold Coast

A stirring exhibition not to be missed
By Laurel Andress

This exhibition, which constantly travels the world, features works that give a unique insight into the spiritual practice of Falun Gong (also known as Falun Dafa) and tells the story of the persecution of people who practice in China. Falun Gong is an ancient practice that benefits the body, mind, and spirit.

Anthony Watling, on being approached by the Falun Dafa Association of Australia, Queensland Branch Inc. to hold an exhibition, thought at the time, “We have an opportunity to do something about this, to bring some awareness to their plight, to their situation. How lucky are we!

“The great thing about art, it introduces you to a subject matter in a gentle way. We’re not just here to listen to speeches; we’re here to appreciate the art. We can see the stories behind the art and get introduced to the situation with the Falun Gong and the political situation without being preached to. As they say, a picture tells a thousand words.”

David spoke about being persecuted in China simply for practicing Falun Gong and refusing to give up his beliefs in the practice. “All the stories shown in the paintings are based upon true stories, and the reality of the persecution is even worse than this. My personal experience in China is just one example.

“I was forced to have frequent blood tests together with other Falun Gong prisoners. This didn’t happen to other prisoners, although we didn’t know at the time that the blood tests were for the Communist Party to build a blood donor base for organ harvest teams. Researcher and author Ethan Gutmann estimates that 65 thousand practitioners have been killed for their organs. It’s a terrible evil crime and must be stopped immediately,” David said.

Latest figures show that 170,000 people across China are now suing the former leader of China Jiang Zemin who instigated the persecution of Falun Gong in 1999.

Michael Hart MP said, “I honestly had no idea that some of this stuff was happening in China, so I think it’s been a very enlightening night for me to see exactly what’s going on, especially around the organ harvesting area. I find that a little bit stunning actually.”

Michael said he would put some thought toward how he may be able to support further, “I would think so or otherwise I wouldn’t be doing my job. That’s the way you’ve got to look at it.

“I congratulate Anthony and Bruce on the facility … it’s a boon for Burleigh really to hold these sorts of exhibitions. I think it’s great. I’ll be coming to more exhibitions I would imagine,” Michael stated.

Linda Lyons, an artist herself, has a couple of her own paintings in this art gallery. What she sees in the Zhen Shan Ren art works is that it is “very representational; it was so finely done; I can see great patience. It’s almost photo realism. Very well done!”

Linda said, “It’s been a really special night for me. I’ve never really looked at Falun Gong … thought a bunch of demonstrators that the Chinese government are trying to control and didn’t think they were spiritual in any way.”

Walking in and seeing some paintings of a Buddha, Linda’s thinking changed. “Then when I came around and saw the painting of that fellow having his kidney removed; it was absolutely horrific; it just about brought tears to my eyes … It really did make me feel really emotional, I was really moved by it. I thought how evil treating other human beings as products.

James Holly “would be more than happy to have this” Zhen Shan Ren Art Exhibition at Holly Gallery. “I saw Shen Yun Performing Arts, so I’m all for it. I appreciate people who want to share their story of what they went through; I can’t really relate to, on their level, but I appreciate that they’re speaking up about it,” says James.

James wishes to view the originals in oils, “but visually I think [the paintings] are great. I think they’re amazing. The Chinese are very developed in the art, just that they haven’t been able to express it as they would like to. There’s a new China outside of China, so we’ll see where it leads to.”

Gary Leo, “I worked in China in probably 2007-2008 and I saw firsthand how strong the Party is still over there. I remember. Falun Gong was being persecuted and in Australia they were being represented as an evil organisation rather than a spiritual organisation so this representation of what’s actually happening, and is still happening in China is very, very valid and quite harrowing. I didn’t realize it was to this extent.”

There was wonderful support from the community. “They started coming about half past five, so I think probably maybe even 80, 90 people have cycled through during the evening,” Anthony Watling the owner of the gallery said. “A difficult subject matter, fantastic regards to everyone who hung in there and appreciated what was being said because it’s not easy to hear.”