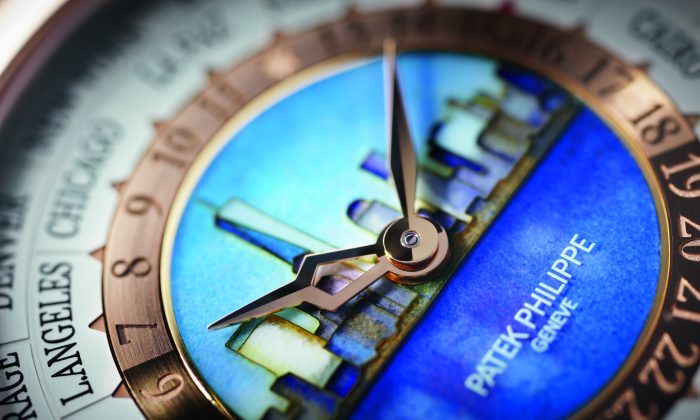 ‘The Art of Watches Grand Exhibition’ of Patek Philippe

NEW YORK—It came and went like a shooting star. “The Art of Watches Grand Exhibition” in New York seemed to leave everyone who entered its doors simply awestruck. This event happens only once every 11 years or so, when the exclusive, family-owned Swiss watchmaking company Patek Philippe decides to share its heritage with the public on a grand scale.

Admission to the two-storied pop-up museum built inside Cipriani—the lavish Italian Renaissance-inspired venue on 42nd Street—was free and open to the public. It welcomed more than 2,400 people a day, like clockwork. The buzz over the exhibition peaked on the closing day of July 23, when people stood in a line that extended around the block to 41st Street.

But how could an exhibition of a Swiss watch company be any different from going into a retail watch store, you might ask? “The Art of Watches” was geared to take visitors on a journey of discovery. It unraveled the mysteries of some of the most complicated timepieces ever made. Ultimately, it answered the question, what is a mechanical timepiece, really?

The exhibition progressed in levels of complexity. It started with a short film explaining how the company started, then eased you into a room showcasing their current collection. Down the hall and into a replica of the Napoleon Room from the Patek Philippe Salons in Geneva, you could see special New York editions, signaling the company’s strong ties with the U.S. market.

In the next room, you dove into historic pieces from the collections of the Patek Philippe Museum, including, for instance, the first wristwatch, a pocket watch owned by Queen Victoria, and a pair of dual perfume pistols with watches, among other fascinating pieces. Next to it, the U.S. Historic Room displayed notable timepieces, such as the desk clock gifted to John F. Kennedy a day after his famous “Ich bin ein Berliner” speech in 1963, as well as watches owned by General Patton; jazz giant Duke Ellington; baseball legend Joe DiMaggio; the trainer of the famous racehorse Seabiscuit, Tom Smith; and the rival collectors and industry titans Henry Graves Jr. and James Ward Packard. Further along, people lingered in the Rare Handcrafts Gallery, where artisans demonstrated miniature marquetry-making, enameling, engraving, and jewel setting.

Upstairs, you could talk with watchmakers who answered questions by actually showing you various mechanisms, including the inner workings and charms of a minute repeater. Minute repeaters strike the hours, quarters, and minutes, some on request, by operating a sliding knob. These are the most difficult mechanical timepieces to create, and it takes about 15 years for a watchmaker to learn how to make them.

By this point, you would be full of wonder at this tiny glimpse of these micro-machines operating without batteries or electricity. With their ticking sounds, they seem to have their own heartbeats.

“There’s a sense of mystery about how these things actually work,” said Larry Pettinelli, president of Patek Philippe U.S., at Cipriani on July 19. Even expert horologists and collectors can’t fully explain how the energy from the spring, which is wound by hand, is then released very consistently throughout the movement so as to engender a very strict and accurate timekeeping.

The watch is a micro-machine that has continued to be developed since its invention in the 1700s, or even further back in time. In 1839, the Polish pioneer in the field, Antoine Norbert de Patek (1812–1877), joined the French watchmaker and inventor Jean Adrien Philippe (1815–1894) to establish their company. Without pause, Patek Phillipe has been excelling at safeguarding and fostering the tradition of horology—always planning ahead of time, always up to date.

Fast forward a few centuries, and we can now marvel at a commemorative timepiece that Patek Philippe displayed in the exhibition’s Museum Room. The Star Caliber 2000, created for the new millennium, is the only portable mechanical timepiece in the world that can play the Westminster chimes with all the notes in the original sequence. It also indicates the brightest and dimmest stars in the Milky Way every day, among 20 other special features, called “complications.” In the world of horology, complications are admirable functions that tell you anything beyond the time, such as a perpetual calendar, a chronograph, or the time in a second time zone, to name a few.

During the Great Depression, the Stern family, the original dial manufacturers for Patek Philippe, took over the company. Today, the Sterns consistently think about new designs and look for new ways and materials to make the watches even more accurate. “They feel this innovation is not going to stop until they make a watch that has perfect accuracy and doesn’t ever need to be serviced. That’s the ultimate goal,” Pettinelli said. “This is the way they continually push the envelope in watchmaking.” He paused. “And it has to be beautiful.”

The movement (the inside) of the watches is masterfully crafted, and it’s the most expensive component of Patek Philippe watches, which is not necessarily so for other Swiss watch brands. As every part is manufactured in-house, from the ground up, Patek Philippe has the capacity to hand finish every part of the movement to the highest degree. You cannot see it from the outside, but some parts of the movement are even engraved.

The cases are equally beautified. In the Rare Handcrafts Gallery, artisans demonstrated old world crafts, such as engraving with a guilloché machine. Patek Philippe has the tenacity to preserve these crafts, which have declined steadily since the 1800s with the increased interest in industrialization over artistry. In the golden age of Geneva’s craftsmanship, you could hire an enameler from among 300 or 400; today there are only eight watch enamelers in Geneva. Patek Philippe honorary president, Philippe Stern, has emphasized that the company has always tried to preserve the artistic crafts in watchmaking, even during times when there was no demand for it. Stern said in a video on the company’s website that preserving this savoir faire is a guarantee for the future of the company.

On a first visit to the exhibition, you marvel at these micro-machines that encapsulate the perfect coupling of artistry and human technology, to an uber-refined degree. After repeat visits, you begin to realize that Patek Philippe’s deeper motivation has been, at its very core, about the joys of creation.

Patek Philippe watches are priced at a minimum of $12,135 (for the Ladies Twenty~4), average at around $45,000, and go up to the millions (for their very limited Grand Complications watches). It is known as the top brand among watch collectors. The exhibition, of course, catered to those who already understand the incredible ingenuity and beauty of Patek Philippe timepieces. But perhaps the main impetus for the exhibition, which took three years of planning, was to instill and foster the company’s time-tested values, including independence, tradition, innovation, and service. A more practical reason was to provide a springboard for attracting a new generation of watchmakers and watch owners.

“The baby boomers are getting older,” Pettinelli said. “We have to figure out a way to talk to the 20- and 30-year-olds who maybe don’t even wear watches. They don’t know Swiss watches. We want to see if we can educate a little bit and hopefully get watches back on people’s wrists.”

But not just anybody can own a Patek Phillip timepiece, even if they have all the money in the world. They have to demonstrate a deep understanding and appreciation for Patek Philippe. To qualify for a special edition, a potential buyer would have to have, at a minimum, a track record of collecting the brand over the years, Pettinelli implied.

On the opening day of the exhibition, three people had already expressed interest in purchasing one of the Ref. 5531 World Time Minute Repeater New York 2017 Special Edition watches with decorated motifs of the New York City skyline. “It’s going to be a little tricky” to decide who will be allowed to buy them, Pettinelli said. Collectors from abroad probably won’t qualify in this case. The exclusive watches are part of a collection of nine special editions that were created as a thank you to U.S. retailers and their customers. More than 30 potential buyers were added to the waitlist before the exhibition closed.

It may seem risky for owners of Patek Phillipe watches to walk around with literally half a million dollars on their wrists, but Pettinelli said that most of them wear their watches daily. “We want to see people who buy them, appreciate them. We are not looking for somebody to use them just as a financial tool or a commodity,” he said. “They are made to be worn. Like a car, they work better if you use them.”

Passing On a Deeply Rooted Tradition

No matter how old or how rare the Patek Philippe timepiece, it can be repaired. The company keeps a detailed archive of every watch it has ever made, and if a part is damaged beyond repair, the watchmakers will recreate those parts. The company even maintains the original machines that were used to make watches over 150 years ago, so as to be able to repair any timepiece from the 1800s.

You have to think long term with Patek Philippe; their watches get passed down through three or four generations. “That’s the beauty of them,” Pettinelli said. “We build them to last forever, as long as you maintain them. We will repair every watch we ever made.”

But it takes time. Today, Patek Philippe makes 55,000 watches per year, and every five years the watches have to be oiled, regulated, and serviced. In the United States, there are only 24 Patek Phillipe watchmakers who repair 10,000 watches a year for the U.S. market. The delay time is about 18 weeks for a regular complicated watch. “That’s just too long. We don’t want our really good clients to have to wait that long,” Pettinelli said.

To close that gap in time, two years ago the company founded an institute for training new watchmakers in the United States. It’s a timely move considering that demand for mechanical watches could increase dramatically any time now, given their allure. It’s already an open secret that a select group of people working in Silicon Valley, who probably also have Apple watches, are into mechanical watches. “They are huge Patek people too, because, just like everybody else, they are looking for something that lasts and that they can pass down to their kids,” Petinelli said.

Reflecting on “The Art of Watches Grand Exhibition,” you realize you don’t have to be a millionaire to be part of the conversation. You don’t have to own a Patek Philippe watch to appreciate the ingenuity, the precision, and the artistry of mechanical timepieces. Patek Phillipe is making that certain.

A Resurgence of Art
Time to Contemplate Time Among the Ancients