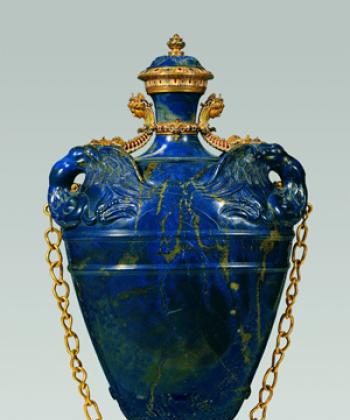 The Art of Hardstone Carving and Mosaic Inlay

NEW YORK—During the Renaissance and Baroque periods, it was common practice to cut semiprecious stones, such as agate and lapis lazuli, to fashion extravagantly designed luxury objects. Table tops, wall panels, cabinets, and ornate display items—developed at the height of the Roman Empire—enjoyed a magnificent revival during these periods and mesmerized European society, both as objects of desire and as diplomatic gifts.

The Metropolitan Museum of Art’s major exhibition this summer, “Art of the Royal Court: Treasures in Pietre Dure from the Palaces of Europe,” offers a unique overview of the wealth and scope of hardstone carving and mosaic inlay. Known as “commessi di pietre dure,” magnificent works of art were created for the princely courts of Europe between the 16th and the early 19th centuries.

Several courts in Italy—Florence, Milan and Papal Rome—supported the production of pietre dure. It reached its first pinnacle in the 16th century with Grand Duke Ferdinando I de Medici’s strong interest in decorating architecture with precious and semiprecious stones. His esteem for these materials led to the foundation of the Grand Ducal workshop, the legendary Galleria dei Lavori (founded 1588) in Florence, which is still in operation today as the Opificio delle Pietre Dure.

The collecting of Florentine pietre dure and the ambition of other princely dynasties to emulate locally their stylish appearance clearly testify to the high prestige and widespread fame of the Galleria. Prague, Augsburg, and Madrid soon established similar workshops to satisfy the fashion taste for hardstone objects and decorative panels.

Whereas Italian pietre dure continued to enjoy broad appeal during the 17th and 18th centuries, the remarkable inventions of the Northern European manufacturers established their own reputation. Also represented in the Metropolitan’s display are some of the most celebrated objects from the Imperial Lapidary Manufactories in Peterhof (founded 1723) near Saint Petersburg and Ekaterinburg (founded 1726) in the Urals, both in Russia.

In the 18th century, this enthusiasm was also expressed in pictorial panels collected by travelers on the Grand Tour in Italy or reused panels from 17th century pieces. Updated but equally prestigious 18th century furniture incorporated reused 17th century pieces, illustrating the changing fashions in the display of pietre dure.

The exhibition documents the radiating fascination of hard stones as artistic materials and their important placement as highlights of the treasuries of many courts that would eventually evolve into the most renowned museums throughout Europe today.

Some pieces have never been seen in America, among them treasures from important Florentine collections and the Imperial Habsburg collection from the Kunsthistorisches Museum and the Hofburg in Vienna. Other pieces are loaned from the Louvre's Bourbon collection, The Royal Collection at Buckingham Palace, and collections of the Victoria & Albert Museum in London, Munich's Bayerisches Nationalmuseum, the J. Paul Getty Museum in Los Angeles, and the Minneapolis Institute of Art. Examples from the Imperial Russian lapidary manufactory in Saint Petersburg are today preserved at the State Hermitage Museum.

The Met's exhibition “Art of the Royal Court: Treasures in Pietre Dure from the Palaces of Europe” is going on now through Sept. 21.