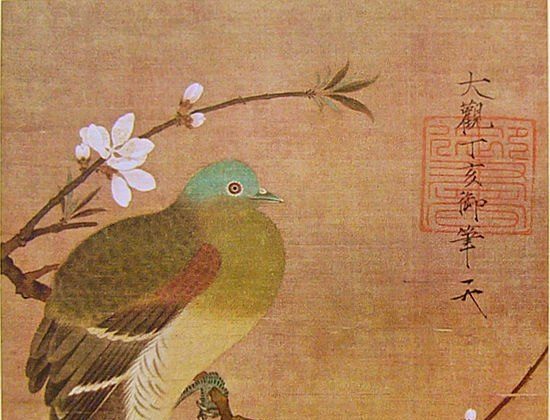 The Art of China’s Bird-Flower Painting Through the Dynasties

The bird-and-flower paintings of ancient China shine a light on the breadth of traditional Chinese culture and philosophy. From the Song to the Qing dynasties, this genre of painting was a favorite subject of classical Chinese artists and shows the value of appreciating and being in harmony with nature.

These works of art were not meant merely to be depictions of nature; they were also meant to convey abundant symbolism. For example, the lush, full bloom of the peony flower represents wealth and opulence. The lotus flower rises untainted from the muddy depths, and it represents purity and moral integrity. The healing powers of the chrysanthemum signify a strong life of positive energy. The plum blossom does not wither during the harsh winter and so embodies perseverance and determination.

As for birds, peacocks represent divinity and power, cranes symbolize longevity, and a pair of ducks characterizes love.

Artists performed careful life studies of birds to develop a depth and variety of techniques for portraying them realistically. As a result, Song artists were able to cultivate a meticulous, fine brushstroke technique.

Emperor Huizong (Zhao Ji was his personal name) of the Song Dynasty was an avid patron of the arts and influential in the development of the Song court academic style of painting.

A celebrated painter himself, his pieces are known for their rich colors, vitality, and realistic, meticulous style. His “Pigeon on a Peach Branch” shows a colorful pigeon perched on a branch with blooming peach blossoms. Zhao Ji illustrated only one blossom in full bloom, with other flowers still budding, in order to maintain focus on the pigeon.

In “A Golden Pheasant Resting on Hibiscus Branch,” Zhao Ji depicts a pheasant perched on blooming hibiscus branches. Its neck is twisted to gaze at two butterflies hovering over a bed of chrysanthemum blossoms below. Zhao Ji also wrote a poem in admiration of the pheasant’s five virtues: literary talent, military virtue, benevolence, courage, and trustworthiness.

The meticulous details in both pieces show that Song academy painters had reached a high level of technical skill.

Whereas the imperial court set the tone for artistic taste in the Song Dynasty, the Yuan Dynasty witnessed the emergence and dominance of a literati movement. The Mongolian conquest of China restricted the opportunities for artists, who were left without the patronage of the court. Seeking a new direction, these painters were influenced by the literati scholars and began to turn away from realism.

The literati artists developed various techniques, like the freehand style of painting, and avoided an overly polished style. They sought to convey the inner spirit of the subject and express their personal feelings in their artwork.

In Zhang Zhong’s “Withered Lotus and Water Birds,” a pair of mandarin ducks is depicted on the shore of a lotus pond. A majestic male appears to be waddling toward the water, while a female crouches behind him. Cattails bend in the breeze with some withered lotus leaves.

In the literati style, Zhang Zhong uses simple, freehand brushwork to depict the foliage and combines that with fine, delicate brushstrokes. His use of rather monochromatic ink of light and dark tones throughout the piece is also characteristic of the literati style.

Ming Dynasty bird-and-flower painters inherited the Song academic style, but with variations. The meticulous brushstroke technique was clearly derived from the Song academy, but the Ming Dynasty paintings in the genre exhibited a larger format with more complex compositions, a profusion of details, and brighter colors.

Yin Hong’s “Hundreds of Birds Admiring the Peacocks” depicts two peacocks surrounded by orioles, hoopoes, woodpeckers, finches, pheasants, and magpies, which enliven a Prunus tree and peony flowers. Most of the bird species are illustrated in pairs. The male and female peacocks represent the emperor and empress, respectively, while the other birds represent court officials paying homage to the imperial family.

In “Autumn Egrets and Hibiscus,” Lu Ji portrays a beautiful autumn day on the bank of a pond, with lotus leaves and blooming hibiscus. Two soaring white egrets enter the scene, following one another as they join a third standing in the foreground. Two tits are perched on a weeping willow branch, which extends diagonally, as it sways gracefully in the wind.

The brushwork of Lu Ji presents a fine, fluid technique that goes hand in hand with the lyricism of this composition—another fine example of the bird-and-flower style of the Ming court.

Court painters during the Qing Dynasty initially followed the traditions of the Ming court. However, there was increasing contact with the West through trade and Jesuit missionaries. Emperor Qianlong even employed an Italian missionary painter, Giuseppe Castiglione, to serve at the Qing court. As a result of this cultural exchange, a new school of painting was born.

Nature’s fauna and flora were endless sources of inspiration for both Chinese and European painters. Yet, the genre showed significant differences in the cultures. Flower painting, in particular, had become an admired specialty during the 17th-century Baroque era. Dutch painters were influenced by the scientific revolution when significant advances were made in botany. Painters studied scientifically accurate illustrations to depict their still-life bouquets.

Ancient Chinese painters, on the other hand, had always portrayed flowers situated in their original habitats, while incorporating a poetic sentiment that combined painting, poetry, and calligraphy—together known as the “Three Perfections.”

Emperor Qianlong’s explicit instructions in commissioning “Peacock Spreading its Tail Feathers” were that Castiglione should represent a fusion of Chinese and Western painting. Thus, the piece shows an opulent display of tail feathers with dazzling patterns. The scene is set in an imperial garden with magnolia, peony, and cherry blossoms amid jade-colored rocks. Looking closely at the leaves and the peacock’s neck reveals the use of the Western technique of light and shade variation, while the rocks are portrayed using the Chinese technique of brush and ink.