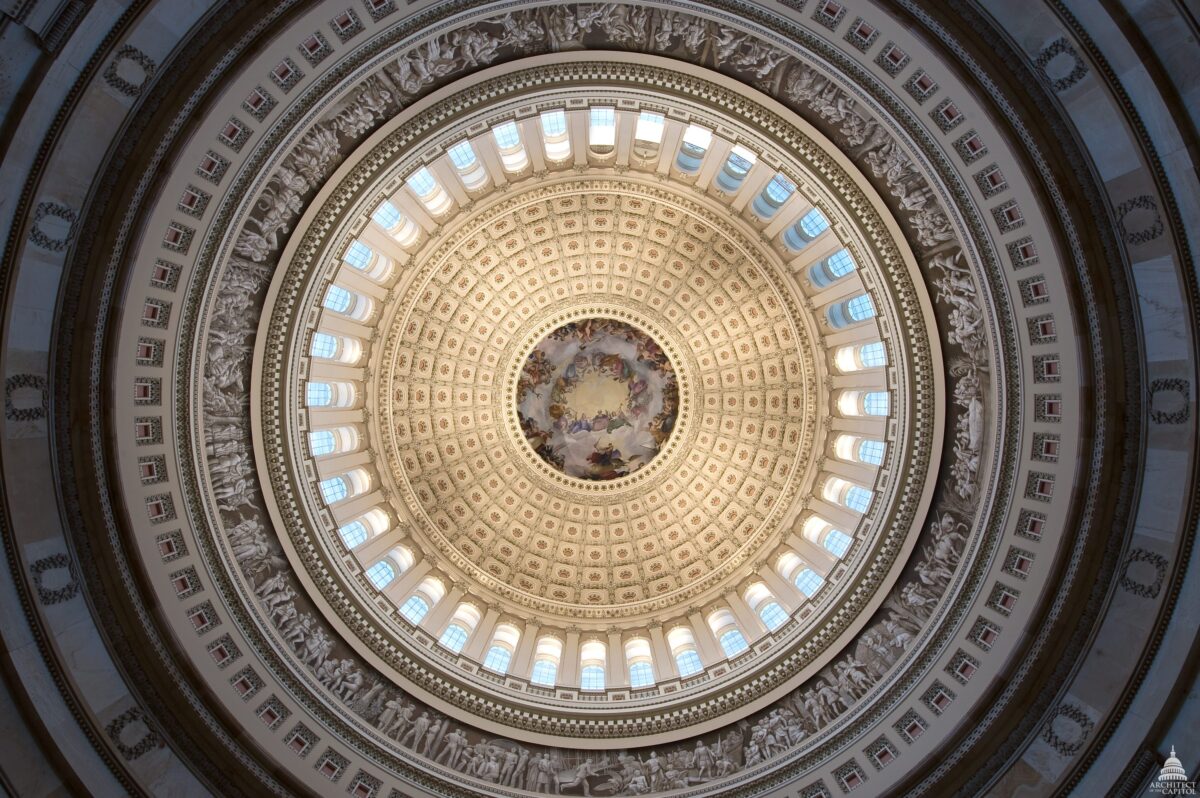 Looking up at the Capitol Rotunda. (Architect of the Capitol)
American Essence

The Apotheosis of Washington: Deciphering the Symbols of Our Nation Hidden Within the Capitol Building’s Dome

Decoding the symbols that represent our nation’s founding principles in the iconic fresco, “The Apotheosis of Washington,” painted inside the Capitol dome
BY Kara Blakley TIMEJuly 14, 2022 PRINT

The U.S. Capitol Rotunda is one of the most iconic spaces in the nation. High above its well-trod floors, the dome features a glorious fresco painting, replete with symbols of American democracy. Suspended 180 feet in the air, “The Apotheosis of Washington” is the master work of American artist Constantino Brumidi. The fresco was completed in 1865, commemorating the end of the Civil War. The painting depicts George Washington, flanked by female figures representing Liberty and Victory, ascending to the heavens. Appropriately, the term apotheosis means the glorification and deification of an individual, and Washington was just as revered in the 19th century as he is today.

Washington wears a presidential suit while he is draped in a purple fabric. Brumidi subtly connected the president to Roman generals, who wore purple cloaks when they returned victorious from battle. The rainbow arch at Washington’s feet is also a Classical symbol of peace and victory. Liberty wears a Phrygian cap, an ancient Roman symbol of freedom. Throughout the fresco, the artist meticulously created an intricate iconographical scheme connecting the United States to the immortal values of freedom and democracy through ancient Greek and Roman aesthetics.

The artist, Constantino Brumidi, was an apt choice of painter: He was an immigrant of both Greek and Italian descent, and he served as a cultural conduit between the antique cradle of democracy and the New World. A master of the classical style of painting, Brumidi helped bring this important symbolism to the United States. Well-versed in Italian Renaissance art, he also modeled many of his figures on examples created by Raphael centuries prior.

The artist masterfully connected Washington and American values to these timeless visual motifs. The significance of “The Apotheosis of Washington,” despite its title, extends well beyond the esteemed first president—it exalts values that are significant to the United States and to the American way of life. The six scenes that complete the fresco are Freedom (War), Science, Marine, Commerce, Mechanics, and Agriculture, which are detailed below. The fresco also pays homage to the country’s origins and history: Thirteen young women, each with a star atop her head, encircle Washington, Liberty, and Victory. Notably, several figures turn their backs to Washington, symbolizing the states that seceded from the union. Two figures brandish a banner that reads “E Pluribus Unum” (meaning “out of many, one”), which is the motto of the United States. The motto appears on the Great Seal and has appeared on U.S. currency since 1795.

Lining the perimeter of the fresco are the six aforementioned concepts, represented allegorically. Freedom is featured directly below Washington, reminding viewers of his role in securing the nation’s independence. Freedom is portrayed as a woman, specifically Columbia, who is the female personification of the United States (hence the capital, District of Columbia). Columbia wields a sword and a red, white, and blue shield as she vanquishes tyranny and kingly rule (symbolized by the red mantle famously donned by monarchs and emperors). A bald eagle carrying arrows and thunderbolts assists Freedom in her triumph.

Science is symbolized by Minerva, the Roman goddess of wisdom. A profound deity, she also represents crafts, the arts, technology, and inspiration. In this scene, she is joined by several prominent American scientists and inventors, including Benjamin Franklin, Samuel Morse, and Robert Fulton. She gestures toward an electrical generator, and several children—the next generation of scientists—look on. Brumidi emphasized that innovation is an integral part of the American spirit.

The next scene, Marine, celebrates the importance of maritime trade and the ocean itself. Neptune, Roman god of the sea, is identified by his trident and crown of seaweed. He rides a sea chariot, alluding to oceanic crossings. Venus, the Roman goddess of love who was born from the sea, holds and helps lay the transatlantic telegraph cables that were being laid at the time of the fresco’s completion. These cables revolutionized intercontinental communications between the United States and Europe.

Marine gives way to the next scene: Commerce. Brumidi strategically placed these two scenes side-by-side as they are inextricably linked. Mercury symbolizes commerce, and he wears his iconic winged petasus (brimmed hat) and shoes and carries his caduceus. The caduceus represents trade, negotiations, and communications—all necessary tenets of commerce. On the right, the anchor and sailors lead into Marine, highlighting the growing importance of international trade as part of American commerce.

Vulcan, Roman god of fire, the forge, and smithery, presides over the scene Mechanics. He holds a blacksmith’s hammer and stands at an anvil; his right foot rests upon a cannon situated near a pile of cannonballs. Behind Vulcan, there is a steam engine—one of the most significant mechanical innovations of the 18th century, which was indispensable to life and industry in the 19th century. Brumidi again created thoughtful continuity, as mechanics—and with it, industry—is connected to commerce.

Lastly, Ceres, Roman goddess of agriculture, graces the scene of the same name, Agriculture. She holds a wreath of wheat (as she is also the goddess of grain crops) and a cornucopia, symbol of abundance. Ceres sits atop a McCormick mechanical reaper, connecting agriculture to mechanical innovation. A figure personifying Young America wears a liberty cap and holds the reins of the horses. Flora, Roman goddess of nature, flowers, and the springtime, picks flowers in the foreground. Her inclusion is a nod toward fecundity and renewed life.

This vibrant, intense, and complex composition establishes a profound connection between Classical aesthetics and the newly emerging American style. Brumidi created a reflective synthesis between the Classical and the American, an ingenious manifestation of the international Neoclassical style that is sometimes referred to as the Federal style in the United States. Notable examples of Neoclassical architecture in the United States include the White House and Thomas Jefferson’s Monticello estate. In American painting, ancient Greek and Roman motifs were reinterpreted for the dawning of a new era. American artists, philosophers, and political theorists revered the democratic values that flourished in antiquity and sought to emulate the artwork of the period as a way to affirm the visuals and ideals of American democracy.

Kara Blakley
Follow
Dr. Kara Blakley is an independent art historian. She received her Ph.D. in Art History and Theory from the University of Melbourne (Australia) and previously studied and taught in China and Germany.
SHARE
Friends Read FreeCopyFacebookTweet
You May Also Like