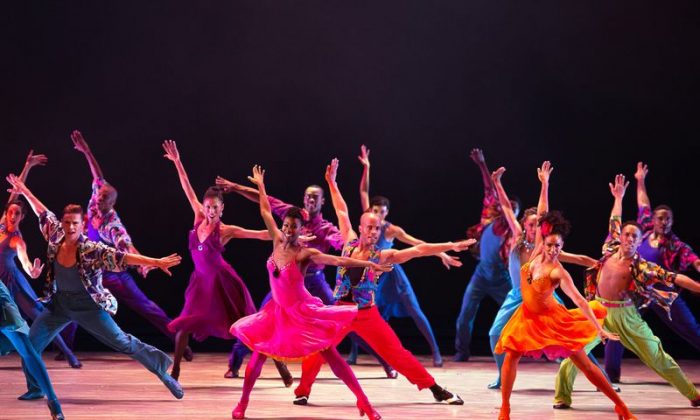 NEW YORK—Among the highlights of every holiday season in New York is the return of the Alvin Ailey Dance Theater for the month of December to City Center. This is truly family entertainment. Even the many young children in attendance were entranced by the extraordinarily graceful dancers, inventive choreography, jazzy music, and colorful sets and costumes. The residency, from Nov. 29 through Dec. 31, included 18 works, six of which were premieres and new productions of old work.

Here is a rundown of the two performances I attended:

“Victoria” is a new work by the Spanish choreographer Gustavo Ramírez Sansano, who has created works for Nederlands Dans Theater, Hubbard Street Dance Chicago, and the Atlanta Ballet.

“Victoria” is set to composer Michael Gordon’s adaptation of Beethoven’s Seventh Symphony, which, basically, takes one idea from each movement of the symphony. The most that could be said for the clangy score is that at least “Victoria” inspired Sansano.

Sansano created a dance where the performers make movements (sometimes graceful, sometimes jerky) apart from each other but join into pairs at various moments. It was a suitable introduction to the athleticism and grace of the troupe.

“Members Don’t Get Weary” is the first dance that Jamar Roberts, an award-winning dancer with Alvin Ailey American Dance Theater, has choreographed for the company. The work is set to recordings of two of saxophonist-composer John Coltrane’s early-1960’s pieces: In the lyrical “Dear Lord,” the men and women are dressed in blue and wear straw sombreros. Their movements suggest prayer. The second half, set to “Olé” (which incorporates the Spanish folk song “Anda Jaleo”) is more kinetic.

The program notes quote Ralph Ellison about the blues, and the choreographer has stated that he intended to highlight the side of the blues that acts as a balm in troubled times. Ultimately, it succeeds as an uplifting work that fits in the Ailey tradition.

The concluding work on the program was Talley Beatty’s ”Stack-Up,” set to music by Earth, Wind, and Fire and the mellow saxophone of Grover Washington Jr., among others. The three-part jazz-dance suite is supposed to have been inspired by traffic on a Los Angeles freeway. The dancers, presented against an urban background (suggested by “Under the Bridge,” a painting by Romare Bearden), are dressed in colorful street outfits. The landscape provides love as well as dangerous temptations.

The crowd-pleasing “Stack-Up” has the pizzazz of a Broadway musical number and is not far from the dance idioms of “West Side Story” and “In the Heights.”

This 1983 dance by Tony Award-winner Twyla Tharp (restaged by Shelley Washington) is choreographed to David Byrnes’ recordings of his songs. The work is the final section of Tharp’s larger dance drama, “The Catherine Wheel.”

Tharp’s choreography may be of a slightly different style than that of Ailey’s usual choreographers, but the versatile company has no problem meeting its challenges.

This 1992 work by Billy Wilson is set to music by the great jazz trumpeter Dizzy Gillespie: “San Sebastian,” “Lisbon,” and “Manteca” (following a brief opening theme of music by Charles Fishman). The dance is restaged by Masazumi Chaya to celebrate the centennial this year of Gillespie’s birth.

A burst of energy with moments for love, the dance captures the jazzman’s exuberance and wit. The dazzling ending is a reminder of the Latin tinge that the trumpeter often explored.

Robert Battle, the artistic director of the company, choreographed “Ella” to one of the late singer Ella Fitzgerald’s most spectacular scat recordings, “Air Mail Special.” Swinging Ella hilariously fits in references to pieces as disparate as “Grand Canyon Suite” and “Davy Crockett, King of the Wild Frontier.”

The concluding piece on the program was Alvin Ailey’s masterpiece, “Revelations.” The work is based on his “blood memories” of life in the South under segregation.

Ailey, who died in 1989 at age 58, recreated in the piece the South of his childhood, from the oppression of slavery and segregation (performed to the spiritual “I Been ‘Buked”) to the sanctuary of the black church. I have seen the work a number of times, but it is still inspiring and overpowering.

Ailey II (the spin-off group of young dancers) will perform from March 14-March 25, 2018 at the Ailey Citigroup Theater.