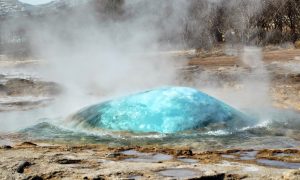 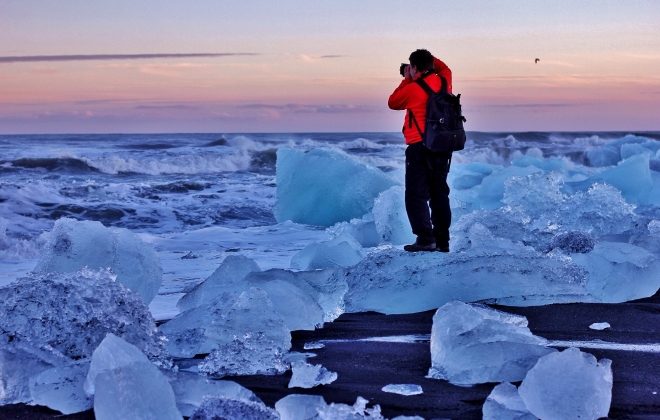 I scramble up the hill. Small black stones and rocks are loose beneath my feet but I’ve always been nimble and give little care as to whether I trip over or not. I’m almost at the top. With each step forward my excitement grows.

I stand mesmerised from the top at the view below. Icebergs are lying in a pool of sunlight. I’ve never seen anything like it before. I’m speechless yet I could scream to the high Gods. I want to jump and dance and kiss the ground but I manage to contain myself for the sake of other people. My smile, however, cannot be tamed. I’m grinning like a lunatic released from a mental asylum.

This is generally how I feel when I’m far North, the fresh air does something to my brain, I feel high. It’s more than just exhilaration. Maybe it’s what you get when exhilaration crosses with reverence. No, it’s still more than that. But this feeling is intensified in Iceland, the best I can find to describe it is otherworldly, a lunar landscape filled with cracked black rocks interspersed with florescent moss, orange and red surface fissures, pools of bubbling mud pots, erupting geysers, rainbows, basalt pillars, black beaches, waterfall after waterfall, glaciers and icebergs. It’s a natural world, but a trippy and beautiful one.

I yell to my colleague from Taber Holidays that I’m in heaven, and he nods in agreement. He’s taken me to a stop off just before the main part of Jökulsárlón Glacier Lagoon which has less visitors, and the ice appears to be more like ice floes instead of icebergs. He tells me the ice seems to have retreated since he was last here. Perhaps it’s down to climate change or it could just be the natural movement of the ice, I’m not entirely sure. It makes me wonder. A place like this cannot disappear.

After walking around with my jaw on the floor, my colleague said it was time to head over to see the ‘daddies’. We head back to the car and 5 minutes later, over the bridge, we enter the official entrance of Jökulsárlón. I see what he means by the ‘daddies’ they’re much bigger, but the space is more restricted so on a whole it is no more an impressive view than the first one. I therefore recommend stopping at both.

However, I spot some seals bobbing up and down here which sets off another bout of euphoria, I’m hoping that they’ll move closer to the land but it’s clear to see they prefer lounging around on the ice like a Rubenesque figure on a Chaise Longue.

It’s difficult to put the size of these icebergs into perspective, but some are the size of houses, whilst others appear like flat, thick ice-sheets.

I walk around the area, exploring its different facets. I bend down to look for pretty stones, and examine the clusters of ice broken away from the icebergs; they look like huge crystals dazzling under the sunlight against the black sand. I pick one up and lift it to my mouth and take a big slurp – it’s as fresh and cool as a mountain spring.

A suggestion for anyone travelling here is bring your own bottle so you can refill at the nearest stream or waterfall. The opportunities to do this are aplenty. Iceland has some of the cleanest water in the world so experience it. It’s unnecessary to keep buying plastic bottles, and when you’re in a country that strives for a more eco lifestyle, it’s a good idea to follow that example. I promise if you do, you’ll go home and think twice about how some of your actions impact the environment and how they can be easily changed.

Copyright © 2014 by The Culture Map. This article was written by Shing Lin Yoong and originally published on www.theculturemap.com