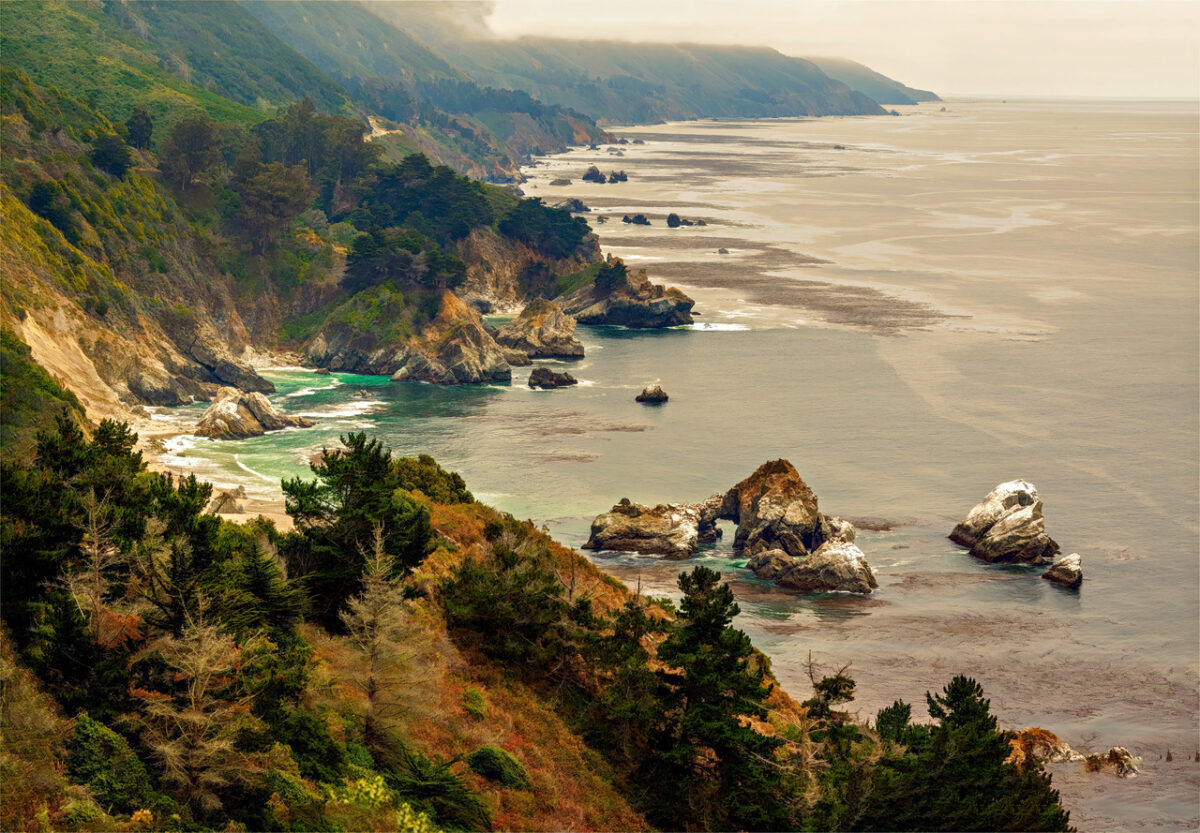 The Allure of Big Sur: Why This Slice of California’s Coastal Wilderness Has Captured Artists’ Imaginations for Generations

Why the region has captured the imagination of artists, writers, and poets alike
BY David Coulson TIMESeptember 16, 2022 PRINT

Big Sur is not so much a destination as a state of mind. The landscape and wildlife speak to the naturalist in every soul who visits there.

For decades, people have journeyed to Big Sur seeking inspiration and communion in this magnificent natural cathedral. Time spent exploring along the coast or trekking through the mountains or roaming among the redwoods or simply laying back in harmony with the surroundings is a sojourn for body, mind, and spirit.

Central California’s Big Sur region of wild and rugged coast and rough and tumble mountains stretches for 90 miles from Carmel to San Simeon, intersected only by iconic Highway 1. Big Sur is about the mountains and the ocean and the interface between the two. Early-20th-century resident poet Robinson Jeffers called it the “greatest meeting of land and sea in the world.”

Big Sur’s grandeur and remoteness have long made it a haven for literary luminaries. Author Henry Miller developed a strong relationship with the area, embracing it as his spiritual home for 18 years.

“Big Sur has a climate all its own and a character all its own,” he wrote in his mid-century memoir “Big Sur and the Oranges of Hieronymus Bosch.” “Skies of pure azure and walls of fog moving in and out of the canyons with invisible feet, hills in winter of emerald green and in summer mountain upon mountain of pure gold. There was ever the unfathomable silence of the forest, the blazing immensity of the Pacific, days drenched with sun and nights spangled with stars.”

From his house set on a slope above Partington Canyon, Miller had imposing views of the ocean. But he chose to work in a small, wooden shed facing a wall, not to be distracted. “Big Sur is the California that men dreamed of years ago,” he wrote. “This is the Pacific that Balboa looked at from the Peak of Darien, this is the face of the earth as the Creator intended it to look.”

Miller fretted that the unspoiled complexion of Big Sur would be lost to the “air-conditioned nightmare” of modern life. He needn’t have worried. It is much the same now as then. Admittedly, a procession of RVs does form in the summer. But only about 1,750 residents live there.

Other than the Native American Esselen tribe, followed by a few loggers, mountain men, and pioneer families in the late 19th century, Big Sur remained a fortress for solitude. Then, in 1937, came the completion of Highway 1, with the blasting of cliff faces and the erecting of bridges spanning cavernous canyons to create a tenuous, narrow strip along the coastline.

“This was home, this rugged, lonely coast,” novelist Nora Roberts wrote in “Daring to Dream.” “He had tooled along the spectacular Amalfi Drive in Italy, sped through the fjords of Norway, but not even their heart-stopping beauty could match the sheer drama of Big Sur.”

Its breathtaking stretch of cliff-hugging, hairpin-turned highway is considered the quintessential scenic coastal route in North America. Even if you cruise the tight track in a humdrum Hyundai instead of a snazzy Mustang convertible with the wind in your hair and the sounds of the Beach Boys’ “California Saga” celebrating Big Sur in your ears, this drive uncorks clutch-the-edge-of-your-seat excitement.

You never know what’s over the next rise or around the next bend. It might be mountains that plunge into the ocean, surf and wind that pound the rocky shore and contort the cypress trees into otherworldly shapes, or a sheltered cove that harbors a tranquil sea painted in shades of turquoise and sapphire.

Big Sur is a hiker and naturalist’s delight with five state parks. The Ventana Wilderness of Los Padres National Forest encompasses a wide range of terrain and trails from casual to challenging and sea level to thousands of feet in elevation. Some of the shortest and easiest jaunts are among the most picturesque. Meadows and hillsides are awash with brilliant wildflowers such as lupines, goldfields, and paintbrush and Calla lilies. Old pirates’ haunt Partington Cove is where otters and seals frolic in the sea swells. McWay Falls plummets 80 feet onto a secluded beach.

In an enchanting forest canyon stroll among a mantle of lush mosses, five-fingered ferns, and delicately flowering sorrel, the only sound is a rippling creek. You will be walking in the footsteps of John Steinbeck; let him be your guide. “Soon the canyon sides became steep and the first giant sentinel redwoods guarded the trail, great round trunks bearing foliage as green and lacy as ferns. A perfumed and purple light lay in the pale green of the underbrush … and overhead the branches of the redwoods met and cut off the sky.”

At higher altitude, the redwoods give way to choked scrub and pungent sagebrush characteristic of an ascent to 3,709-foot Pico Blanco, “a steep sea wave of marble” in Jeffers’s words. Once atop, taking in the panorama, look for California condors with a wingspan of more than nine feet, soaring in bright, cloudless sky or amid fingers of fog.

Many Big Sur beaches can only be admired from afar because of high cliffs. But there are accessible strands where you can wiggle your toes in white sand. Garrapata Beach’s long shore and thunderous waves are attractive to beachcombers and lollygaggers alike. The small cove at Garrapata Creek on one end and Dowd Creek spilling over the bluff onto the beach at the other serve as bookends.

Pfeiffer Beach is renowned for its lavender-tinted sand, and offshore Keyhole Arch is popular at sunset. It’s a prime location to sight migrating gray, humpback, and blue whales. Local winged residents living along the sweeping seascape include gulls, cormorants, pelicans, and snowy plovers.

Beyond Big Sur’s scenic splendor is its ecological diversity and importance as habitat for terrestrial and marine wildlife. Nowhere else will you find fog-nurtured redwoods thriving on one slope of a canyon and sun-worshiping yuccas on the other. Similarly, sea otters and cormorants live near dry-climate canyon wrens and whiptail lizards.

Richard Brautigan wrote in his novel “A Confederate General from Big Sur”: “This morning I saw a coyote walking through the sagebrush right at the very edge of the ocean―next stop China. The coyote was acting like he was in New Mexico or Wyoming, except that there were whales passing below. That’s what this country does for you. Come down to Big Sur and let your soul have some room to get outside its marrow.”

The mountainous reaches of the Ventana Wilderness that extend inland for 30 miles are a tight jigsaw of ragged ridges impenetrable other than by mule or foot. Only the most intrepid venture to the headwaters of the Big Sur and Little Sur rivers tucked away high in the Santa Lucia range. The rushing, tumbling torrents cascade down through narrow, rock-walled canyons, spilling into crystalline pools canopied by stands of old-growth redwoods.

The cool marine layer does not extend past the coastal crest, leaving much of the Ventana Wilderness hot and dry during the summer and early fall. The rare, spire-like Santa Lucia fir is found only here on the windswept slopes and rocky outcrops.

Jeffers captured this desolate and hard-bitten terrain in early stanzas of “The Beaks of Eagles”:

Above Ventana Creek, that jagged country which nothing but a falling meteor will ever plow; no horseman

Will ever ride there, no hunter cross this ridge but the winged ones, no one will steal the eggs from this fortress.

The she-eagle is old, her mate was shot long ago, she is now mated
with a son of hers.

When lightning blasted her nest she built it again on the same tree, in the splinters of the thunderbolt.”

The poem embodies the timeless spirit of Big Sur. A pilgrimage there catches time in a bottle that lasts a lifetime.