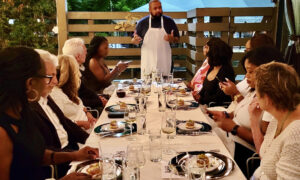 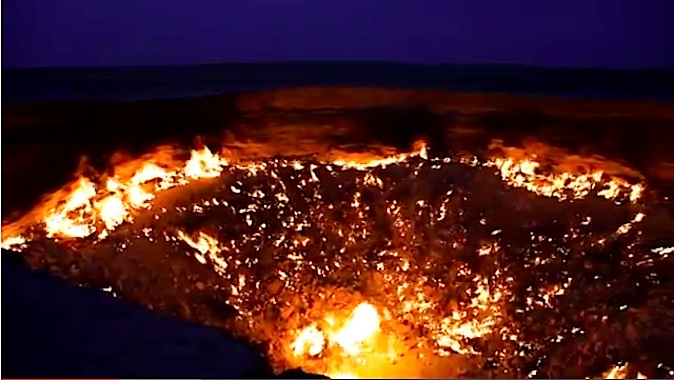 Need a Vacation? The 5 Most Hellish Places on Earth

Feeling crowded in a city filled with people?

Need to get away for a while?

Then hell, I’ve got the place for you!

Take a trip to paradise by visiting the top 5 most Hellish places on earth.

The Gate to Hell

Welcome to the wonderful village of Derweze, Turkmenistan.

Back in 1971 when the Soviet Union was in control of the village, some miners were drilling and accidentally opened up this gigantic hole filled with toxic gas. They wondered, “What should we do about the gas so we can keep drilling?”

Set it on fire.

For over 40 years that fire has continued to burn, creating one of the most fascinating, hissing, pits of death ever known to man.

Don’t lean too close to the edge because random gusts of hot wind may make your vacation to Hell an eternal one.

Dante Alighieri wrote in his Divine Comedy that there were 9 levels of Hell. If the Inferno was located in Beppu, Japan, then he was right!

The Chinoike Jigoku (“Bloody Pond Hell”) is one of 9 hot springs, with its most notable feature being blood red water that boils at over 200 degrees Celsius (392 Fahrenheit).

Why is it blood red? Because of the high iron oxide (hematite) content in the sediment deposited at the bottom of the pool.

Fun fact: The word hematite is derived from the Greek word for blood.

The Japanese version of Hell is based on the Buddhist belief in multiple layers of Hells, each with a different nature. Fitting enough, the eight other hot spring attractions of Beppu each have a distinct nature, such as boiling grey mud, hot blue water, milky water, or a hot geyser that erupts every 25 minutes.

It was also where they tortured and executed people.

The Japanese think the Bloody Pond is a thrilling place to take the kids, and has been a famous tourist spot for centuries.

Why settle for only one Gate to Hell, when you can have two? So much more convenient.

On the North Island of New Zealand lies Tikitere, a geothermal hot spot filled with steaming lakes, a mud volcano, and “The Inferno” pool.

It seems that a Maori princess, the wife of an abusive village chief, threw herself into the boiling hot pool, and when her mother found her body in the water, lamented, “Aue teri nei tiki,” which means, “Here lies my precious one.” The phrase was then shortened to “tikitere.” Such a beautiful memento, no?

Irish playwright George Bernard Shaw visited the island in the early 1900s. His theologian colleagues back in England had chastised George for his atheist beliefs, telling him he would end up in Hell one day. When George visited Tikitere he figured that if Hell does exist, this is most likely the entrance, so he called it “Hell’s Gate.”

The Maori locals decided “Hell’s Gate” had a lovely ring to it, so they took George’s suggestion and named it this in honor of his visit.

George also gave endearing names to a few other hot pools, such as Sodom and Gomorrah.

When tourists have spare time on their hands they use hot mud to take cleansing baths.

Spare time? If Hell is eternal, then you’ll have plenty, so enjoy the trip!

Step through the gateway of your former sanity and enter an alien realm filled with rocks, strangely shaped rocks, and oh yes, big rocks.

A hiker’s paradise with black and fire-red hills, petrified logs, and the fossilized remains of dinosaurs that used to live in this former rainforest over 70 million years ago.

All this and more await you in the Bisti Badlands, New Mexico, where not a soul survives. It’s guaranteed you’ll be the only person for miles. All that sweet, arid nothingness to yourself.

Fun Fact: At one point in history the coal deposits in the badlands caught on fire, and they burned for centuries, filling the land with shiny burnt glass called “clinkers” that clink when you step on them.

Who says Hell has to be hot?

Or stop by Vostok Station, the coldest place on earth, with a lowest recorded temperature of -89.2 degrees Celsius (-128.56 Fahrenheit). Russian scientists and guests report immediate hallucinations upon arrival, sightings of animals that don’t exist on the continent, and strange smells.

If neither of those are your cup of tea, try the Dry Valley, a completely ice-free region with almost 0 humidity due to the dry ‘katabatic winds’ that can reach up to 200 mph (320 kmh) and make it one of earth’s most extreme deserts.

While you’re there take a detour to Blood Falls, where blood red saltwater pours out of a frozen glacier filled with microbes that have survived on its iron-rich waters for over a million years in terrifying darkness.

Earth, such a lovingly Hellish place! So, which vista are you off to first?

Or do you know of another Hellish place on earth that should make the list?