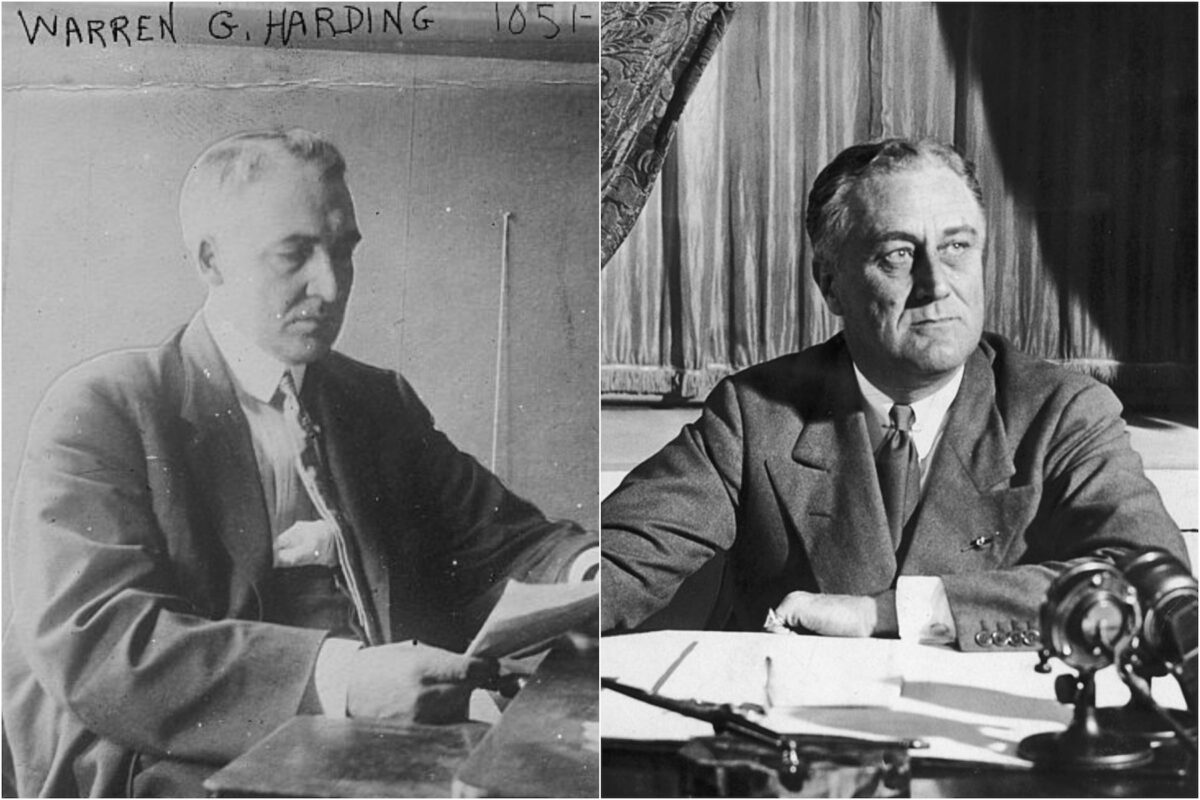 The 2 Presidents Whose Economic Policies Are Most Misunderstood by Historians

FDR and Warren G. Harding both inherited dismal economies. One of them quickly turned things around.
BY Ryan S. Walters TIMEMarch 9, 2022 PRINT

One is viewed as among America’s greatest presidents; the other perhaps the worst of all. One is hailed as a savior; the other as a failure. One is given memorials to enshrine his name for all time; the other is pushed into the sea of forgetfulness.

Both men came into office with an economy in tatters, and both men instituted ambitious agendas to correct the respective downturns. Yet their policies were the polar opposite of one another and, as a result, had the opposite effect. In short, Harding used laissez-faire-style capitalism and the economy boomed; FDR intervened and things went from bad to worse.

Despite these clear facts, in C-SPAN’s latest poll ranking U.S. presidents, FDR finished third in the rankings, while Harding finished 37th. Surveying how both handled the economy, scholars ranked FDR third in that category, while Harding came in at 32. This is a tragedy of history.

America in 1920, the year Harding was elected, fell into a serious economic slide called by some “the forgotten depression.” Coming out of World War I and the upheavals of 1919, the economy struggled to adjust to peacetime realities, falling into a serious slump.

The depression lasted about 18 months, from January 1920 to July 1921. During that time, the conditions for average Americans steadily deteriorated. Industrial production fell by a third, stocks dropped nearly 50 percent, corporate profits were down more than 90 percent. Unemployment rose from 4 to 12 percent, putting nearly 5 million Americans out of work. Small businesses were devastated, including a Kansas City haberdashery owned by Edward Jacobson and future president Harry S. Truman.

Harding campaigned on exactly what he wanted to do for the economy—retrenchment. He would slash taxes, cut government spending, and roll back the progressive tide. He would return the country to fiscal sanity and economic normalcy.

“We need a rigid and yet sane economy, combined with fiscal justice,” he said in his inaugural address, “and it must be attended by individual prudence and thrift, which are so essential to this trying hour and reassuring for our future.”

The day after Harding’s inauguration, the LA Times editors predicted “good times ahead,” writing, “The inauguration yesterday of President Harding and the advent of an era of Republicanism after years of business harassment and uncertainty under the Democratic regime were hailed” by the nation’s business leaders. I. H. Rice, president of the Merchants and Manufacturers Association, told the press, “Good times are now ahead of us. Prosperity is at our door. We are headed toward pre-war conditions. … Businessmen are well pleased with President Harding’s selections for his Cabinet, and by the caliber of men he has chosen, we know that he means business.”

Under Harding and his successor, Calvin Coolidge, and with the leadership of Andrew Mellon at Treasury, taxes were slashed from more than 70 percent to 25 percent. Government spending was cut in half. Regulations were reduced. The result was an economic boom. Growth averaged 7 percent per year, unemployment fell to less than 2 percent, and revenue to the government increased, generating a budget surplus every year, enough to reduce the national debt by a third. Wages rose for every class of American worker. It was unparalleled prosperity.

FDR certainly inherited a bad economy, like Harding, yet he made it worse, not better, prolonging it for nearly a decade. With the stock market crash in October 1929, the American economy slid into a steep recession, which Herbert Hoover, successor to Coolidge, proceeded to make worse by intervening with activist government policies—increased spending, reversing the Harding-Coolidge tax cuts, and imposing the Smoot-Hawley tariff. By 1932, thousands of banks had closed and 20 million Americans were unemployed. The unemployment rate hit a staggering 25 percent in 1933. Industrial production fell 45 percent.

Roosevelt ran aggressively against Hoover in 1932, lambasting him for his big-government policies. But whereas Harding was honest about his free market prescriptions for the economy during his 1920 campaign, FDR deceived the public.

Though he campaigned on a more conservative economic agenda than Hoover and called for a 25 percent cut in federal spending and a balanced budget, once in office, FDR set in motion a massive government economic intervention called the New Deal. In his book “Looking Forward,” he stated that he wanted to “avoid the terrible cycle of prosperity crumbling into depression. In this sense,” he said, “I favor economic planning, not for this period alone but for our needs for a long time to come.”

And the economic planning was vast. In addition to the Federal Reserve pulling a third of the money out of circulation, under FDR, taxes were tripled and new taxes were added, such as Social Security, taking more money out of the pockets of ordinary Americans and businesses alike. Between 1933 and 1936, FDR’s first term, government expenditures rose by more than 83 percent. Federal debt skyrocketed by 73 percent. In all, spending shot up from $4.5 billion in 1933 to $9.4 billion in 1940.

FDR further hamstrung business by filing 150 antitrust suits. He also plowed up millions of acres of farmland and slaughtered millions of livestock animals to bring prices up. He artificially set prices on a whole host of consumer goods rather than allow the market to set them. He took the nation off the gold standard and spent billions to employ workers in a wide range of jobs.

The results were disastrous. “Far from having gotten us out of the Depression,” wrote economic historian Robert Higgs, “FDR prolonged and deepened it, and brought unnecessary suffering to millions.”

Unemployment under Roosevelt averaged a little more than 17 percent and never fell below 14 percent at any time. And, to make matters worse, there was a second crash in 1937. From August 1937 to March 1938, the stock market fell 50 percent. Economists called this unprecedented phenomenon a “depression within a depression.” As Hitler’s Wehrmacht pushed into Poland, the American unemployment rate hit 19 percent.

“We have tried spending money. We are spending more than we have ever spent before, and it does not work,” Treasury Secretary Henry Morgenthau Jr. said in testimony before Congress. “And I have just one interest, and if I am wrong … somebody else can have my job. I want to see this country prosperous. I want to see people get a job. I want to see people get enough to eat. We have never made good on our promises. … I say after eight years of this administration, we have just as much unemployment as when we started. … And an enormous debt to boot!”

Clearly the New Deal had failed. As Stanford history professor David M. Kennedy wrote in his Pulitzer Prize-winning book “Freedom From Fear,” the New Deal “was not a recovery program, at any rate not an effective one.”

But Warren Harding’s program was. Unlike FDR, who was no better than a “C” student in economics at Harvard, Harding understood that the old method of laissez-faire was the best prescription for a sick economy. This “despised figure,” writes Tom Woods on Harding, “was … a better economist than most of the geniuses who presume to instruct us now.”

Indeed he was, and the real historical record conclusively proves it.

This article was first published on FEE.org