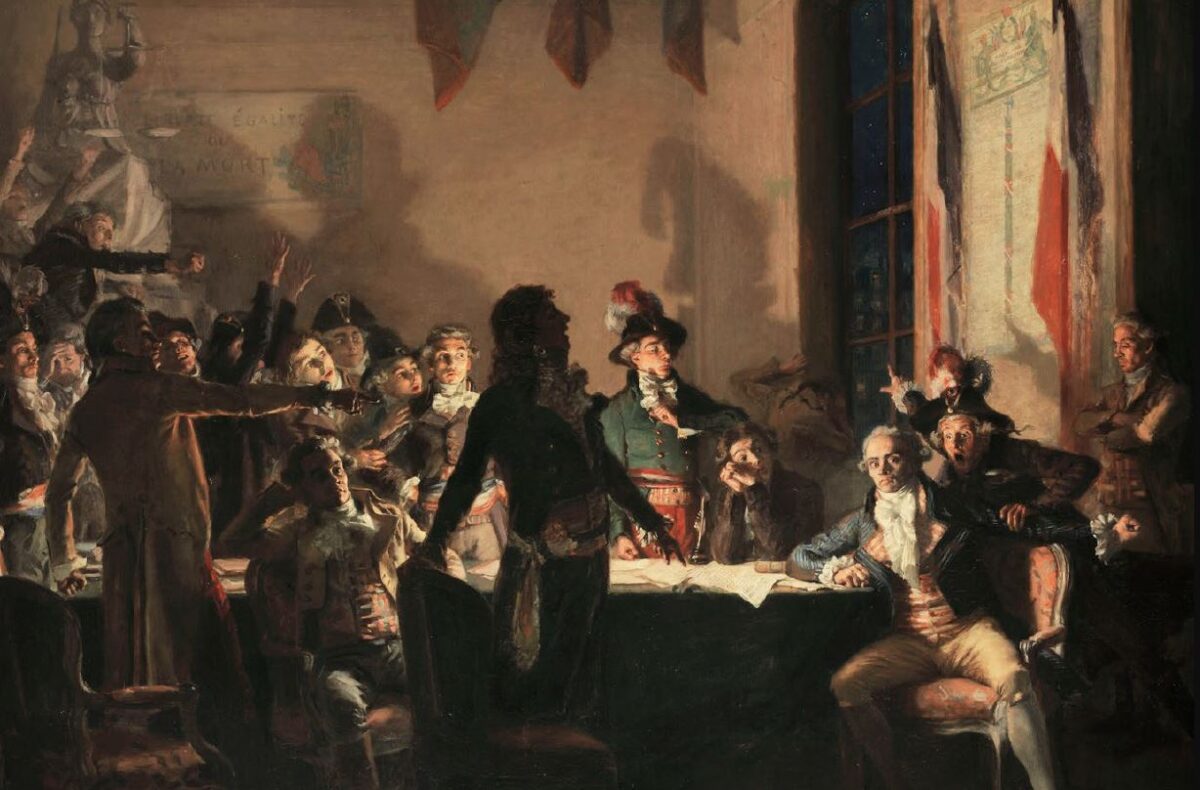 “Most arts have produced miracles, while the art of government has produced nothing but monsters.”

The man who spoke those words was one of history’s premiere authorities on the subject. He was a monster himself, made so by the toxin we call “power.” On July 28, 1794, he and a famous cohort departed this earth for whatever reward awaited them.

His name was Louis Antoine de Saint-Just (1767–1794). His close friend and political ally was Maximilien Robespierre. Together, they engineered The Terror of the French Revolution, a violent spasm of repression and slaughter. Both men rose to supreme power, only to be devoured by the same machine to which they dispatched so many others. A key difference between Saint-Just and Robespierre on the one hand and their numerous victims on the other was that the former earned their grisly conclusions.

In a February 1794 speech, Robespierre (1758–1794) likened terror to virtue. The end (a virtuous, egalitarian republic) justified whatever means made it possible:

“If the basis of popular government in peacetime is virtue, the basis of popular government during a revolution is both virtue and terror; virtue, without which terror is baneful; terror, without which virtue is powerless. Terror is nothing more than speedy, severe and inflexible justice; it is thus an emanation of virtue; it is less a principle in itself, than a consequence of the general principle of democracy, applied to the most pressing needs of the homeland.”

To any sane and decent person, “virtue” doesn’t remotely apply to what the revolutionaries were undertaking. But note that even the bloodiest, most radical of the lot employed positive terminology in defense of their evil work: “justice,” “democracy,” “homeland,” “popular government,” and the like. They butchered thousands of people in the name of “liberté, égalité, fraternité!”

On Sept. 5, 1793, the National Convention (France’s revolutionary Parliament) voted to declare that “terror is the order of the day” to safeguard the revolution from its foreign and domestic enemies. Three months later, it conferred vast executive authority on the notorious Committee of Public Safety.

From his perch on the committee, Robespierre relayed the group’s judgments to Saint-Just, widely known as “the Archangel of Terror,” who supervised the seizures of property, the mass arrests, and the subsequent executions. Saint-Just’s blood-curdling rhetoric was terrifying in itself:

“You have to punish not only the traitors, but even those who are indifferent; you have to punish whoever is passive in the republic, and who does nothing for it. … The vessel of the Revolution can arrive in port only on a sea reddened with torrents of blood. … A nation generates itself only upon heaps of corpses.”

On June 10, 1794, the National Convention enacted the infamous Law of 22 Prairial. It brought forth an expansive list of “public enemies” who were to be punished by death with almost no legal recourse. Rivers of blood soaked the streets of Paris for the next six weeks. Then, as the chaos reached a zenith, the revolution suddenly devoured its two most vehement practitioners. Robespierre and Saint-Just were arrested on July 27 and guillotined the following day. The former was 36 years old, the latter only 26.

A close examination of these two men reveals an astonishing, corrosive effect of political power. Nothing else can explain the remarkable change in their personalities. Before the revolution, Robespierre was a mild-mannered opponent of the death penalty. With supreme power in his hands, he became one of the monsters of whom Saint-Just wrote.

Saint-Just’s transformation is even more disturbing, as noted by several historians. Described as “freewheeling and passionate” a few years before, he almost overnight became “focused, tyrannical and pitilessly thorough,” “the ice-cold ideologist of republican purity,” and “as inaccessible as stone to all the warm passions.” He deserted the woman he loved, trashed his friends, abandoned his affection for literature, and metamorphosed into a killer with a single cause—to control, torture, or murder to “remake” society.

If you had run into either Robespierre or Saint-Just on a Paris street before the revolution that began in 1789, you likely would have enjoyed a pleasant conversation. You would have judged them as friendly, intelligent, and articulate up-and-comers. Similarly, if you had sat in the classroom next to Adolf Hitler at Vienna’s Academy of Fine Arts in 1910, you likely never would have guessed what he would do once he had accumulated power a couple of decades later.

The 20th-century philosopher Eric Hoffer studied fanatics and the power that fanatics crave. He thought that power brings out the worst in any mortal, that few in number are those who can walk away from it or restrain themselves when they gain it:

“The corruption inherent in absolute power derives from the fact that such power is never free from the tendency to turn man into a thing. … For the impulse of power is to turn every variable into a constant and give to commands the inexorableness and relentlessness of laws of nature. Hence absolute power corrupts even when exercised for humane purposes. The benevolent despot who sees himself as a shepherd of the people still demands from others the submissiveness of sheep. The taint inherent in absolute power is not its inhumanity but its anti-humanity.”

I can think of no more toxic motivation than power—the desire to push other people around, seize their possessions, make them your plaything, and stuff them into a box or worse. We should never underestimate what power can do to even the best of people. We should run for our lives when even a best friend claims he’ll do good things if only he has the power to do them. If history teaches us anything, this is it: Do not concentrate power in the hands of anyone or any group.

Do you think the danger is only national, never local? Then you’ve never had to deal with the control freaks that all too often take over a local zoning committee or a school board.

If power is a demon, Robespierre and Saint-Just were utterly possessed and warped by it. When the exorcist came for them, his only remedy was their demise.

How will we know if the evil that power promotes is lurking in our midst? What will it say beneath its mask? I’ll venture this: It will say things such as “Pack the Court!” It will seek to silence dissenting opinions. To sow chaos and confusion, it will redefine nature itself or assault any longstanding custom or principle that stands in its way. It will lure us with false promises. It will invent villains and victims and posture as our savior. It will tell us that all sorts of wonderful things will come our way if only we will give the state the power to deliver them.

My advice is this: Don’t fall for it. Instead, consider these words of a Frenchman named Frédéric Bastiat, who knew how malevolent power can be:

“Be responsible for ourselves. Look to the State for nothing beyond law and order. Count on it for no wealth, no enlightenment. No more holding it responsible for our faults, our negligence, our improvidence. Count only on ourselves for our subsistence, our physical, intellectual, and moral progress!”

Maybe that’s too much to ask. But when the alternative is tyranny, Bastiat’s warning should at least concentrate the mind.

“Francois-Noel Babeuf: The Marxist Before Marx” by Lawrence W. Reed

“The Terror: The Merciless War for Freedom in Revolutionary France” by David Andress

“The French Revolution and What Went Wrong” by Stephen Clarke

“A Tale of Two Revolutions” by Robert A. Peterson

“The Wisdom of Eric Hoffer—Part 1” by Lawrence W. Reed

“The Wisdom of Eric Hoffer—Part 2” by Lawrence W. Reed