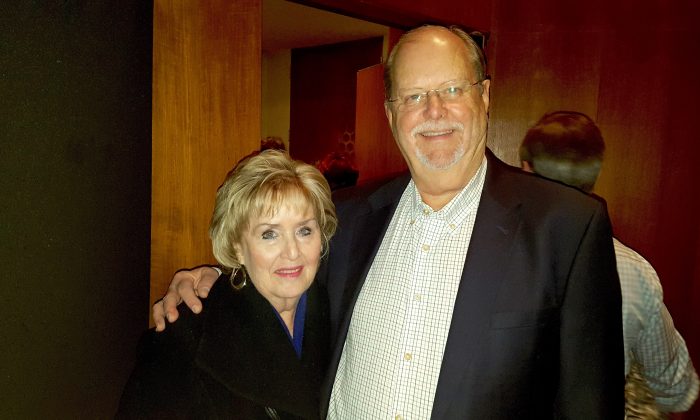 HOUSTON—”I will tell everybody I liked it,” said Darrell Cherry just seconds after getting up from his seat as Shen Yun Performing Arts’ curtain call ended. “I loved it.”

Mr. Cherry, president of the Texas Gas Association of 100-plus gas companies, saw the Dec. 29 performance with his wife Sidney, and the two smiled throughout the recounting of their experience.

“Colorful, entertaining, exciting, beautiful,” was how Mr. Cherry summed it up. “It’s phenomenal. The physicality, the staging … the staging was crazy.”

New York-based Shen Yun puts on a large production, and it has four companies of the same size that tour globally every year. This season is its 10th and largest tour, with over 400 performances.

The dancers perform classical Chinese dance, and ethnic and folk dances from across China, and don about 400 costume pieces each performance. They travel with a full orchestra which includes ancient Chinese instruments like the two-stringed erhu. The performance also features bel canto vocalists, and a digital backdrop used in stories that is full of surprises.

For Mrs. Cherry, the overall effect was joyful, peaceful, and stunning. “Running water, blue skies, beautiful,” was how she described the ambiance created through the merging of the production’s various aspects. “Stunning, stunning.”

Susan Lueckemeyer and Eric Lancaster who sat front and center, in the “best seats in the house,” Ms. Lueckemeyer said, were also in awe of the production value.

“The show is just … how different it is from anything we see in the United States,” said Mr. Lancaster, a project manager for an oil and gas company.

Ms. Lueckemeyer, who works in sales, said that Shen Yun spreads “artistic knowledge.” Not only does Shen Yun educate audiences from all walks of life on the once nearly destroyed traditional Chinese culture, but she said it would “maintain its integrity for many hundreds of years to come.”

Fellow audience members Mary Abbott, who teaches elementary school teachers, and her daughter Rachel, a creative writing student, were both classically trained in ballet, and impressed by the wholly different form of dance they saw on stage.

“It’s fascinating,” Ms. Rachel Abbott said. Normally big dance productions are Western classics, she noted, like “The Nutcracker” or “Sleeping Beauty,” so she was grateful to be able to experience a different culture through such a grand display.

“Just a glimpse into this … makes you want to see more,” Ms. Mary Abbott said.