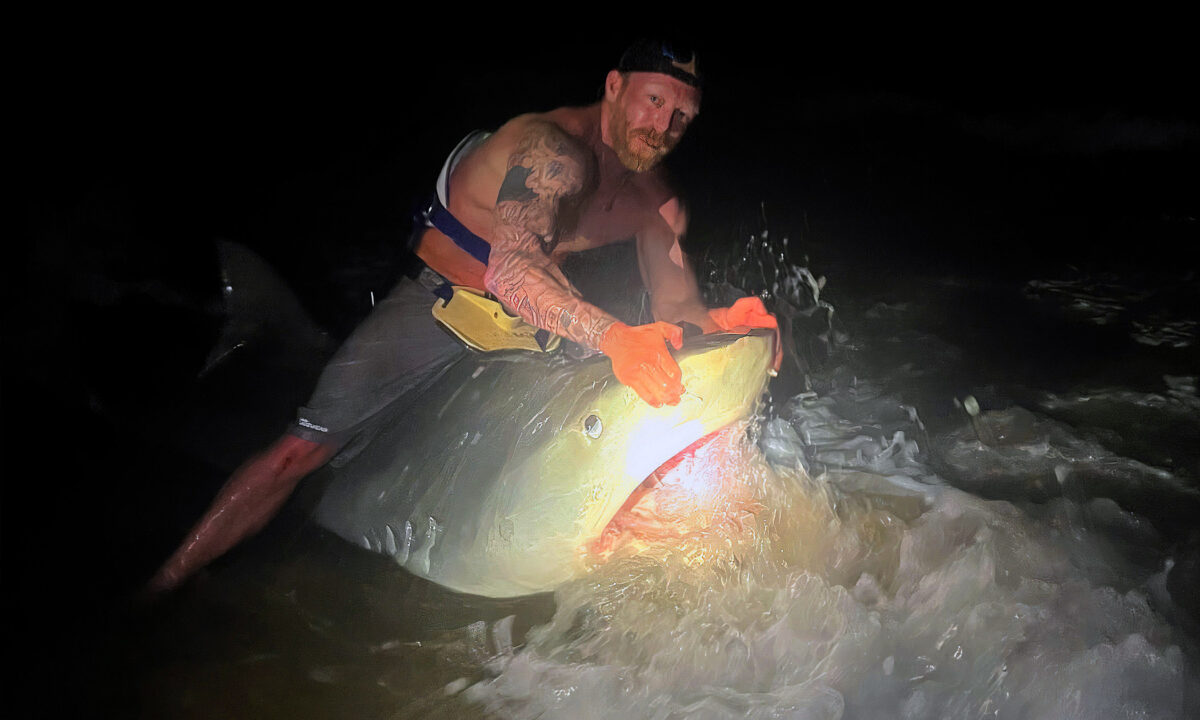 Having shark fished along the Gulf of Mexico most his life, Texas angler Christian Haltermann, 36, recently reeled in his bucket-list catch, a “big fat” female tiger shark weighing about 1,000 pounds, amounting to a personal best.

“The way she ran on, even with that heavy, heavy equipment, I could just tell immediately we had something serious on our hands,” Haltermann told The Epoch Times. “We were over the moon, because we pretty much knew off the bat what we had. I didn’t expect it to be quite that big.”

The shark fisherman from Kyle used to visit Padre Island National Seashore, near Corpus Christi, with his dad. Now, Haltermann regularly takes his own 8-year-old son, Hub, to that very same spot to catch, among other species, bull sharks, blacktips, redfish, jackfish, and — of course — tiger sharks.

It’s impossible to hand-cast the 10–15-pound stingray bait they use; so they load it onto the back of a kayak, row it out about 1,000 meters, and use long, strong lines for the undertaking.

They bivouac two or three nights a stretch to savor each jaunt. Arriving mid-May, pitching camp at 1 p.m. on a Friday, by evening they’d already snagged a pretty good run on “a big, big shark,” said Haltermann. That one got away, but the next day he felt another “brutal” tug on the line.

On the first run, the tiger shark took 400 meters of line — in addition to the 1,000 meters cast; they knew they had to stop her before she hit the spool, and battled back and forth for about an hour until Haltermann finally tired her out enough and reeled her into the wake.

“We were blown away, the first time we saw her, everybody was just like, ‘Holy cow! That thing’s pretty giant!’” he recalled. “Anything over 12 feet is pretty substantial in our area. She was a big fat female, that’s why she was so heavy, too. She was a lot to handle for just one person.”

Hub said it looked like a “tiger shark and megalodon had a baby.”

Haltermann, a volunteer for NOAA, measured her at 12 feet, 5 inches from nose tip to tail tip, a personal best for the Texas angler; given her enormous girth, he guessed her to weigh 1,000 pounds. That came up short of the state record: 13 feet, 6 inches long, 1,129 pounds heavy, according to Texas Parks and Wildlife Department.

Haltermann removed the hook, tagged her, and sent her on her merry way — but not without snapping a few photos with the girl for the road. The pictures, he said, don’t do her justice.

“She was still pretty lively and swam off nice and strong,” he added.

Following in his dad’s footsteps, Hub is already quite the seasoned angler himself. “He caught a bunch of sharks, too, that weekend but smaller stuff, around the 4-foot range,” Haltermann said. The pair try to fish on that stretch of coast twice a month.

Now, the shark fisherman has sights set on his next big prize, hoping to push past 12 feet again with a hammerhead next time.