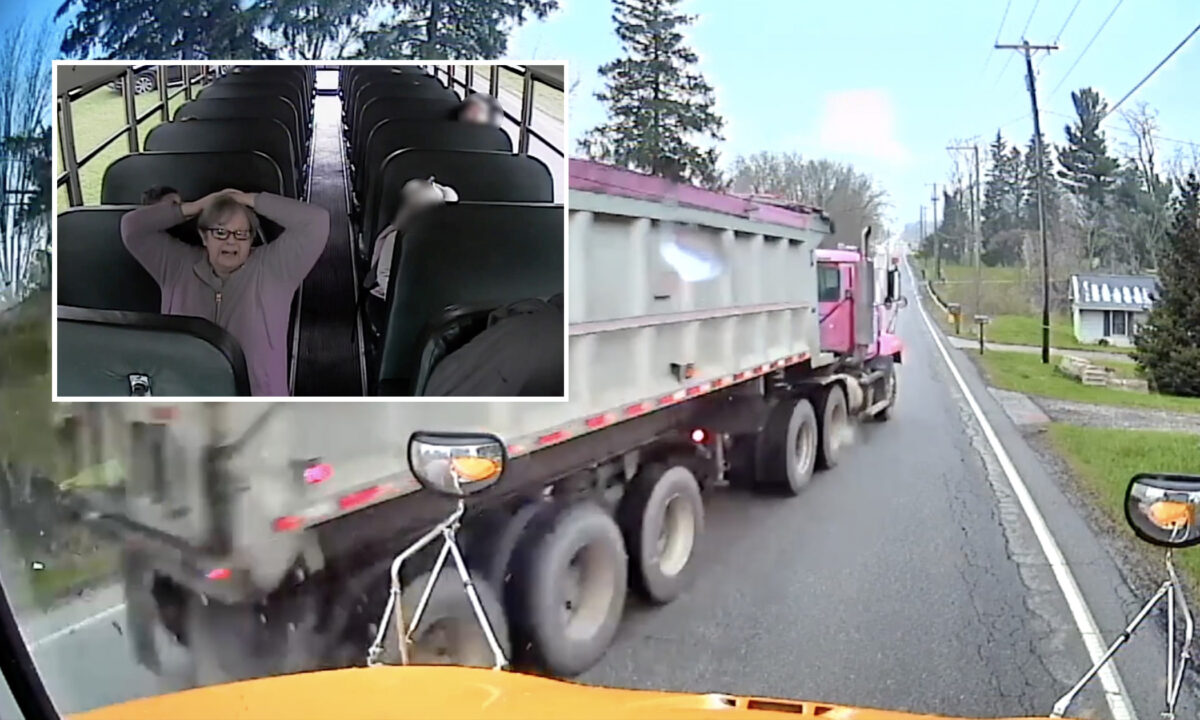 Barreling down an Ohio state highway near Montville on the morning of April 19, the driver realized his brakes had failed. Meanwhile, a school bus was stopped in the single lane roadway directly ahead of him, beyond which more vehicles occupied the oncoming lane.

He can be heard frantically crying out in the video, “Stop, stop, stop! No!” while blaring his horn to signal to the traffic that he was in trouble.

More footage, taken from the school bus, shows bus driver Dylan Boyland, a full-time mechanic for Medina City School Transportation Department, making his second-to-last stop on his first day on the job. Nearing the end of his route, he had 15 kids aboard.

A student is seen taking a seat on the bus while a woman is heard saying, “Oh good God, he ain’t gonna make it!” Horns sound in the background.

“First time with kids on the bus, you’ve really got to get in that driving mode and just take your training to the best that you know you can do,” Boyland told Fox8. “You could hear the horn before you could see the truck.”

As the big rig drew close, an SUV behind the bus pulled off the road into the grass.

Realizing the danger, the pickup truck in front of the row of oncoming vehicles, stopped for the school bus, backed up and bumped the vehicle behind in a bid to give big rig more room.

Boyland, meanwhile, chose not to move the bus.

“You have to know how much time you have to move and where you are at in the situation,” he told the station, adding that some of the kids didn’t seem to realize the seriousness of the situation they were in. “Some of them kind of knew what was going on a little bit but others were like ‘what was that truck?’”

Racing by, the big rig driver had shifted into the oncoming lane to avoid the school bus, weaving through the narrow gap between the bus and oncoming traffic, precariously avoiding a collision.

He was able to slow the truck to a stop about a quarter mile down the road.

“He did an excellent job in fifteen seconds he had to put that 80,000-pound rig somewhere and he was able to thread that needle and do it without injuring or hitting anything,” said Montville Police Chief Matt Neil.

“In his statement, he told us that he was trying to stop,” he said. “He realized he couldn’t stop in time and he began down shifting, blowing the horn, hitting the lights, flashing the lights and doing everything in his power to alert everyone, the oncoming traffic the car behind the school bus and the bus that he’s coming through and he’s not going to be able to stop.”

Chief Neil added that any misgivings one might have seeing the truck driver’s dangerous maneuvering are put into perspective after watching the frightening footage from inside the cab.

The department commended him a for his quick actions to avoid what could have easily been a catastrophe, but is investigating the incident to determine the cause, focusing on maintenance of the truck and the driver’s pre-trip inspection.

“You need to take a situation and you need to identify it, predict the outcome, decide what you are going to do and then do it so to make those decisions in that short window and maneuver around the vehicles,” he said. “That he went around, he’s one of my heroes after watching it.”