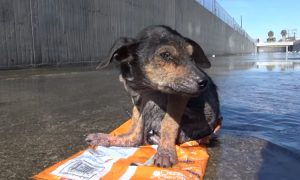 Pup With Leg Cut Off Gets Choked and Thrown 30ft, Manages to Miraculously Survive
0 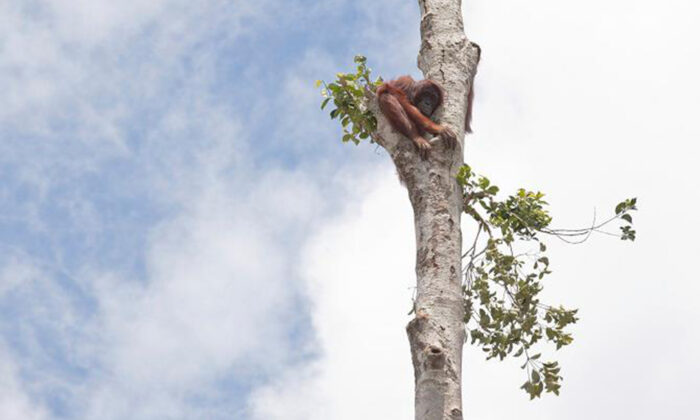 Massive swaths of rainforest have been bulldozed on the southwestern Asian island of Borneo recently to keep up with the booming palm oil industry. A viral image shared by the organization International Animal Rescue (IAR) of an orangutan clasping a lone tree back in 2013 showed just how high the cost has been for countless animals as their homes are destroyed.

IAR was dispatched with a local forestry group to a palm plantation to see about the orangutan, named Boon-Mee, and a pair of others like her left in the aftermath of a deforestation project.

The trio of primates luckily lived on plantation land owned by members of a conservation group—so when they discovered her and her friends starving and alone in the midst of land already decimated by the deforestation practices, they called the U.K.-based IAR to rescue the stranded animals.

IAR official Lis Key explained that although they were fortunate to save these orangutans, the overall situation was tough to witness.

“It’s heartbreaking to see the appalling state of these animals as their habitat is razed for the palm oil industry,” she said. “They were weak from hunger. It’s a small comfort that this time, rather than chase them off or kill them, the company did the right thing and contacted us.”

The IAR officials initially arrived at the scene expecting just a single primate, which was living off just bark from the tree it was hiding in. It had been stuck there in the tree, weak from hunger and terrified as the forest around her was torn down.

When they got to the tree, though, they found that this wasn’t the only one. One of the trio of orangutans had recently given birth, they realized, as she was lactating, and was semi-unconscious at the scene, though the baby was nowhere to be found. Another orangutan had a baby with her and was desperately searching for food.

Taking the trio into custody to be given proper medical attention proved somewhat of a challenge to coax down from the sparse treetops. However, with the help of tranquilizer guns and some patience, they were eventually subdued in nets and brought elsewhere to be cared for while she delivered her baby.

Yet the photos of the primate hiding up in the tree, surrounded by empty air where the forest had once been, were stark reminders of the harsh cost of deforestation, and the story of the animal’s rescue attracted attention from major media.

Luckily, all of the orangutans have recovered—though others haven’t been so lucky. Palm oil has been touted as a miracle health ingredient, used for a myriad of purposes from making more health-conscious baked goods to keeping beauty products smoother and longer lasting. But in the areas of the world where it grows best, massive swaths of forests have been chopped down or burned to make room for new palm plants to grow.