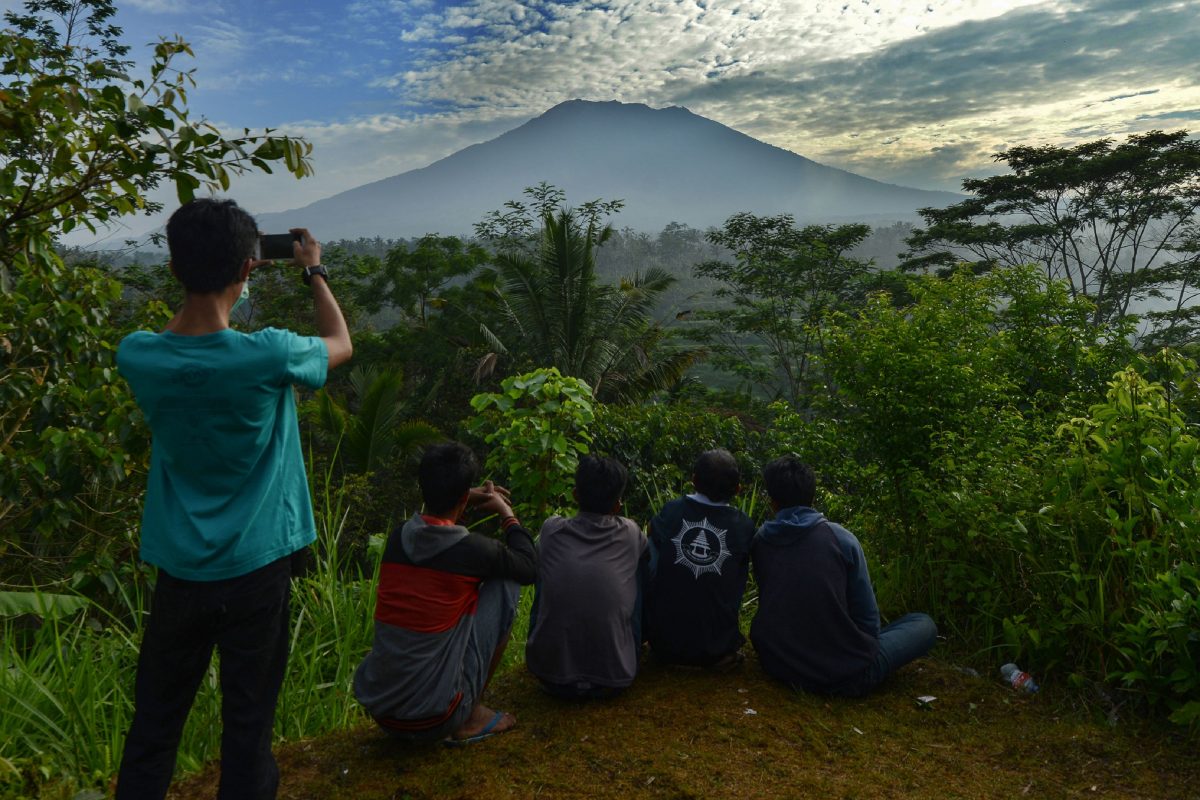 People look at Mount Agung on the Indonesian resort island of Bali on Sept. 24, 2017. Hundreds of small tremors stoked fears it could erupt for the first time in more than 50 years. (Sonny Tumbelaka/AFP/Getty Images)
Travel

Authorities have evacuated tens of thousands from a ‘danger zone’ on the popular holiday island of Bali in Indonesia, fearing an imminent volcanic eruption.

Some countries have issued travel warnings, but no flights have been canceled. Indonesian authorities have been implementing a contingency plan to handle disruption from any potential ash cloud.

With hundreds of tremors recorded every few hours over the weekend, volcanologists warn that the Agung volcano could erupt imminently. Authorities have imposed a 7.5 mile exclusion zone. The last time Agung erupted in 1963, nearly 2,000 people were killed.

Volcanic activity has ratcheted up over the last month or so, building to hundreds of tremors on Sept. 24—volcanologists raised the threat level to 4—the highest possible level.

An eruption is highly likely say volcanologists, but not certain.

Millions of visitors fly to Bali’s main airport every year, which is only 43 miles away from Agung volcano. For now, tourism appears to be unaffected by the stirrings of mount Agung. According to CNN, Bali airport said that no flights have been canceled as of Monday morning.

Many travelers are concerned about the broader disruption of ash clouds to fights in the area.

According to the Red Cross, over 42,000 have been evacuated from the exclusion zone. Authorities estimate that there are over 60,000 inhabitants within the area.

Red Cross Indonesia tweeted a video taken at the edge of the exclusion zone, where authorities have erected warning banners.

The rumblings of the volcano have prompted several nations to post travel advisories over the weekend and on Monday, Sept. 25. The UK, New Zealand, and Australia have been fairly muted in their warnings, advising travelers to keep up to date with the news. Singapore, however, issued a more serious warning.

“Given the possible eruption of Mount Agung, Singaporeans should defer non-essential travel to the affected areas at this juncture,” the foreign ministry said in an online statement.

Early on Sept. 24, a 650-foot-tall column of smoke was seen rising from the mountain, according to the chief geologist monitoring the site, Gede Suantika.

“We observed sulphuric smoke spewing from its crater and we never saw this before,” Suantika told Reuters.

“There are some who are staying behind because the volcano hasn’t erupted yet or because of religious beliefs,” said Indonesian National Board for Disaster Management spokesman Sutopo Purwo Nugroho at a news conference.

Nugroho said Mount Agung has entered a “critical phase,” with hundreds of shallow volcanic tremors indicating that magma has risen closer to the surface.

The Bali tourist board said on Sunday that no ash had been detected in the atmosphere despite intense monitoring and that authorities and airlines had been working on contingency plans to handle an ash cloud.

“Airline activities around Bali airspace are still normal with passengers’ arrival departure process maintained and no record of rushed departure of tourists,” said statement by the tourist board. “Ferries and fast boats between Bali and neighbouring islands of Lombok and Java are also running their typical schedules.”

On a busy dedicated chat forum on Trip Advisor, anxious travelers are sharing information and tips. For the most they appear to be carefully monitoring the situation, rather than rushing to change travel plans.

One poster from Singapore, however, had clearly given into the fears that others were wrestling with.

“I have tickets booked to Bali tomorrow, returning on Friday which I’ve decided not to use. Non refundable unless the airline cancels the flight but I would rather lose the money then end up stuck there if the airport gets closed.

“I’m not too worried about safety as the volcano is miles away, its the idea of being unable to leave if ash clouds close the airport. There will be chaos with thousands of people scrambling to get out by any means they can.”