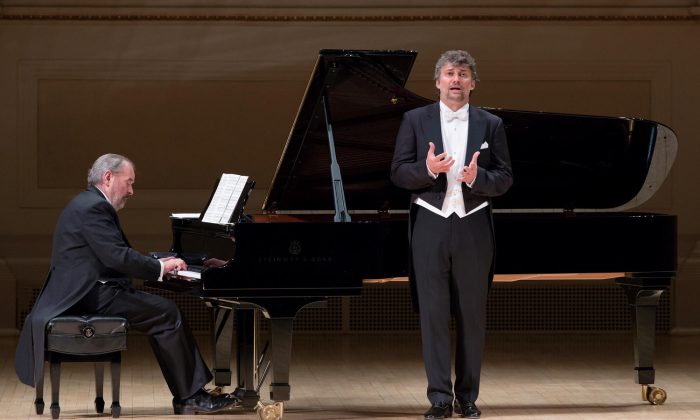 NEW YORK—Star tenor Jonas Kaufmann has made few appearances in New York in recent years and recently canceled his scheduled participation in the new production of “Tosca” at The Metropolitan Opera. Thus, concertgoers were fortunate to see him perform “Die schöne Müllerin” (“The Beautiful Maid of the Mill”) at Carnegie Hall with the excellent Helmut Deutsch on piano.

Franz Schubert’s song cycle “Die schöne Müllerin” is one of the peaks of German lieder. Like his other great song cycle, “Die Winterreise” (“Winter Journey”), the poems that Schubert set to music were by Wilhelm Müller, and though the two men lived during the same period (Schubert, 1797–1828; Müller, 1794–1827), they never met.

The 20 songs chart the trajectory of a pastoral love that ends in failure and death. Schubert knew that his own days were numbered when he wrote this music. The program notes helpfully provided all the lyrics in English and German.

The cycle begins with “Das Wandern” (“Wandering”) and “Wohin?” (“Where?”) in which a young man speaks of his wanderlust and of his being entranced by babbling brooks. He thinks of mill wheels turning from the force of water as a merry dance. In “Halt!” he comes upon a mill with a cozy house and gleaming windows.

In “Danksagung an den Bach” (“Giving Thanks to the Brook”), he ponders whether the murmuring waters led him to the miller’s daughter. Then, in “Am Feierabend” (“On the Restful Evening”), he wonders whether he is worthy of her love. His hope is that the miller will be happy with his work before his daughter wishes him and the other workers a good night.

He doesn’t work up the courage to speak to the object of his affections but instead, in “Der Neugierige” (“The Inquisitive One”), he asks the brook if she loves him. The shy fellow expresses the view in “Ungeduld” (“Impatience”) that all of nature should recognize his emotions, and he seems frustrated that the miller’s daughter should be unaware of them.

He hangs around outside her window to wish her a morning greeting (“Morgengruss”), but she is unnerved by his presence, as if she is vexed or senses something is wrong. When she darts her head back into the room, the singer wonders if she flees the sun. It’s more likely that she is afraid of a possible stalker or voyeur.

In “Des Müllers Blumen” (“The Miller’s Flowers”), he comes up with the idea of planting flowers beneath her window. He thinks seeing the plants in the morning when she wakes will silently convey his “forget me not.” He seems to have made some headway in “Tränenregen” (“Rain of Tears”). At least, they sit down together by the brook, where he is transfixed by the blonde. However, she senses something wrong and suddenly declares that rain is coming, and she must go home.

“Mein!” (“Mine!”) expresses the youth’s deluded view that the miller’s daughter reciprocates his feelings, but doubts seem to set in during “Pause,” communicated in part by the piano accompaniment. When in “Mit dem grünen Lautenbande” (“With the Green Lute Ribbon”) she tells him green is her favorite color, it instantly becomes his favorite as well.

Things go sour with the arrival of “Der Jäger” (“The Hunter”), a rival for the girl’s affections.  The singer begs the brook to intercede on his behalf in “Eifersucht und Stolz” (“Jealousy and Pride”) and scold her for being fickle.

His mood turns dark and, while he is still obsessed with green, “Die liebe Farbe” (“The Favorite Color”), now it is the color of grass over his grave. By the next song, “Die böse Farbe” (“The Evil Color”), green becomes his most hated color. “Trockne Blumen” (“Dry Flowers”) will be laid with his dead body.

In the end, with “Der Müller und der Bach” (“The Miller and the Brook”) and “Des Baches Wiegenlied” (“The Brook’s Lullaby”), he decides to drown himself.

The pair performed four encores, all Schubert songs. While Kaufmann is highly versatile and could have sung opera or operetta, he chose to maintain the mood of the evening.

Upcoming vocal concerts of interest at Carnegie Hall include baritone Matthias Goerne with Daniil Trifonov on piano on Feb. 6, soprano Dorothea Röschmann with Malcolm Martineau on piano on Feb. 13, and tenor Piotr Beczala with Martin Katz on piano on Feb. 28. For tickets, go to CarnegieHall.org