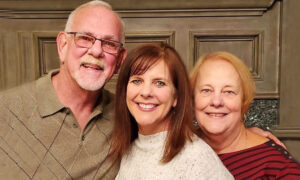 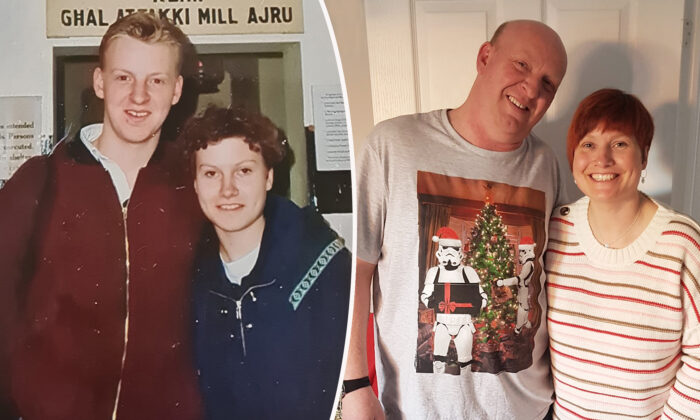 Teenage Sweethearts From 1994 Rekindle Their Love for Each Other, Marry 20 Years Later

Two teenage sweethearts who first met in 1994 have rekindled their love for each other after realizing they are soulmates—marrying 20 years later.

Joy Streatfield, 44, met her first love, Graham, 47, while she was on a family holiday in Great Yarmouth, England.

“I was about 15 years old and my mom was going on her usual holiday to Great Yarmouth which I went along to,” Joy from Louth, Lincolnshire, said.

On her vacation, she met Graham, as he lived in Great Yarmouth. “It just started off as a bit of a holiday romance between kids, but we got along so well that when I went home he came to visit me,” said Joy.

The teens in love then continued visiting each other and things eventually got a bit serious between them.

“We were in love with each other, so when I turned 16 I decided to move to Great Yarmouth so that we could be together properly,” Joy said.

However, it wasn’t quite the fairy tale she was expecting—Graham could rarely spend time with her, as he worked at sea.

Disappointed with how things had turned out in her relationship, Joy, who was young and lonely at that time, felt that there was more to life. Thus, after six months, she decided to move back home, and the couple inevitably split up.

“I was heartbroken that it had worked out this way, but I didn’t regret leaving at first. I was sure I had done the right thing,” Joy said. “Since leaving, Graham and I completely lost touch and had no contact with each other from 1994.”

Joy then moved on to live her own life. Three years later, at the age of 20, Joy decided to get married. She started a family and had two children, Danielle, now 22, and Elliott, now 20.

Joy was married for seven years; due to a rocky relationship, she and her husband divorced in 2004.

Meanwhile, Graham, too, had moved on, marrying and starting a family of his own. He went on to have a daughter, Abby, now 23.

“We lived entirely separate lives for over 15 years until my mom fell ill in 2009,” Joy said. While spending time with her mother in her final days, she and her mom reminisced the “good old days” and their family trips to Great Yarmouth.

“It made me start thinking about Graham and remembering the good times,” Joy said. “I can’t say that I had thought about him much until this point as we were just kids and I thought it was done and dusted.”

She decided at that time to try and get back in touch with Graham and thank him and his family for all of the great times they shared. Luckily, Joy found him on Facebook. Upon seeing his picture, Joy said she was “shocked,” as he was now bald. But she could recognize him because he was the “spitting image” of his father.

Joy sent him a message.

“I was so nervous to send it as I didn’t know how he would react or even if he would still be angry with me for leaving,” Joy said. “But I thought I had nothing to lose and was reaching out like an old friend to say thank you, so I sent it.”

Graham didn’t reply to Joy for one month, but she didn’t think too much about it as she was busy with her mother’s funeral.

“However, to my surprise, a month down the line he sent me a message saying he was sorry to hear about my mom and asked me if it was possible to stay in touch,” Joy said.

Meanwhile, Graham had moved back to live with his mother after going through a divorce.

Joy and Graham continued to stay in touch and finally arranged to meet up once again, on New Year’s Eve of 2009.

“We were both so nervous to meet up, but really excited at the same time,” Joy said. “I was worried about if I was doing the right thing, but after half an hour of meeting, it was amazing.”

For Joy, it felt like time hadn’t passed and the two were back to being the teenagers who were in love with each other.

“It instantly felt comfortable and natural. This was the start of our second relationship. He came and just never left.”

The two got married in 2015 and they both feel that things do happen for a reason.

“It was surreal to finally be together, and finally be happy after so many years,” Joy said. “I do believe he is my soulmate, and I am his.

“We were always meant to find our way back to each other. He is my rock.”