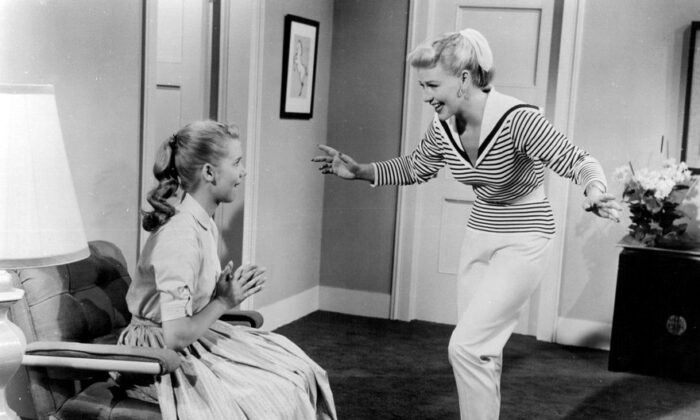 Sometimes the publicity for a film is hard to understand. Rather than promoting a film’s actual attributes, many ad campaigns sell themes that aren’t even in the movies. “Teenage Rebel” is an example of such misleading advertising, starting with its title. “Teenage Rebel” evokes images of reckless youth racing around on motorcycles—James Dean style. That’s far from the theme of this 1956 film.

Instead, the film tells the story of a troubled 15-year-old girl whose character and life are almost ruined by her parents’ divorce. Although the action centers on the daughter’s visit to California, the real star is Ginger Rogers, who plays her mother, Nancy Fallon. We see this story through her eyes as she struggles to regain her daughter’s love and respect.

A better title comes from the play that the movie is based on:  “A Roomful of Roses” by Edith Sommer, which debuted in October 1955. Twentieth Century Fox bought the film rights to the play months before it opened, intending it as a project for Ginger Rogers. Betty Lou Keim, who plays the daughter, Dodie McGowan in the film, created the role on Broadway (where she is named Bridget) with Patricia Neal as her mother. Although the title was changed for the film version, it is quoted in a line when Nancy and her maid, Willamay (Louise Beavers), are preparing the guestroom for Dodie’s arrival.

Nancy Fallon is thrilled when her 15-year-old daughter from her first marriage comes to visit her for the first time since her divorce. The mother has been happily married to Jay Fallon (Michael Rennie) for eight years, and they have a 7-year-old son, Larry (Rusty Swope), together. Nancy hasn’t seen Dodie since she left her father for Jay. Her ex-husband, Eric McGowan (John Stephenson), has purposely kept Dodie out of the country so that she couldn’t visit her mother, despite the divorce settlement allowing for a three-week visit each year.

Nancy is dismayed when she realizes that the sweet 7-year-old she remembers has grown into a bitter, stuck-up young woman who insists on being called Dorothy.

Nancy is convinced that her daughter will grow to love her in time, although she realizes that her ex-husband has poisoned her mind against her. Little does Dorothy know that her father finally sent her to visit her mother because he is remarrying and knows Dodie dislikes his fiancée (Irene Hervey).

Jay supports Nancy in her efforts to win over Dodie, so he enlists the aid of the youngsters next door. Bribed by spending money and a new part for his car, Dick Hewitt (Warren Berlinger) and his sister, Jane (Diane Jergens), agree to befriend Dorothy. This proves a lot more difficult than anticipated, but Dick is persistent. Gradually, he breaks down her unfriendly façade, and she starts falling for him.

“Teenage Rebel” shows the terrible consequences of divorce. It’s sad that two people are unable to make their marriage work, but what is even more tragic is the suffering that their children feel. For more than half of her life, Dodie hasn’t had a real family or home. Eric fought strenuously to obtain custody of her during the divorce, but not due to love. He merely wanted to hurt his ex-wife by keeping them apart.

Eric is obviously a very selfish and bitter man, but he wasn’t the only one to blame for the divorce. Although he and Nancy didn’t get along well when married, Nancy fell in love with Jay Fallon, while still married to Eric, and so she left her husband.

Nancy hoped that she and Jay could raise her daughter together, but she ended up losing custody of Dodie in the divorce. Eric was very angry and hurt when Nancy left him, and those feelings led to his selfish behavior toward Dorothy. The difference between the divorced couple is that Nancy acknowledges her mistake and cares about what happens to Dodie, while Eric does not.

Since Nancy deserted her daughter years ago, Dodie thinks that her mother doesn’t love her. Nancy tries to explain that she never imagined that leaving her husband would result in her losing custody of Dodie. Although she now has a new husband and a son, she has thought about Dodie every day since they parted.

Nancy is extremely anxious to befriend Dodie, but she also wants to mother her. When Dodie speaks disrespectfully to her mother, Nancy firmly forbids her to speak to her that way again, no matter how much she hates her. Rather than spoiling her, Nancy tries to give her daughter discipline and guidance as well as love and kindness.

Eventually, Dodie begins to respond to her mother’s love, feeling close enough to confide in her about her feelings for Dick and her other girlish concerns. She eventually realizes that her mother loves her and wants to help her, if she’ll only give her a chance.

The film contrasts children who come from a broken home and those raised in a traditional family. While Dodie has had a very unstable upbringing, Jane and Dick come from a happy home. We never see Mr. Hewitt, since he is a Navy man who is currently at sea. However, Jane is obviously very close to her father, since she says that she couldn’t possibly choose between her parents.

While Dodie has a chip on her shoulder toward everyone, Jane and Dick enjoy the normal pleasures of youth with their friends while acting respectful and polite toward adults. Through the efforts of her family and her new friends, Dodie learns that she doesn’t have to have a bitter, miserable life because of her parents’ mistakes.

Love and Forgiveness at Summer’s End

This film is appropriate for the end of summer, which is marked by Labor Day. Few classic movies contain scenes set on Labor Day. In fact, this is the only movie I know that does. Dick is very excited about the Labor Day celebration in the community of Palo Alto, California, which includes a drag race and a country club dance. For weeks in advance, he works on modifying his car, spending all his spare time trying to get more speed out of the jalopy.

The Labor Day festivities are the focal point of the film’s action, since it’s then that Dodie really warms up to Dick and begins lowering her barriers toward everyone who tries to be kind to her.  Although her blossoming romance with Dick softens her heart toward everyone, her transformation isn’t complete until she truly opens her heart to her mother’s love.

The issues in “Teenage Rebel” are just as relevant today as they were in 1956. Unfortunately, the traditional values that were common in the 1950s have become ever rarer since. Divorce and remarriage were still taboo in this era, as Jane refers to Nancy’s past as “scarlet.” However, whether common or rare, divorce is just as devastating to the children in 2021 as it was in 1956. This movie shows that children don’t have to let their parents’ mistakes ruin their lives. Dodie chooses to forgive her mother and accept her love, so hopefully she won’t make the same mistakes herself.