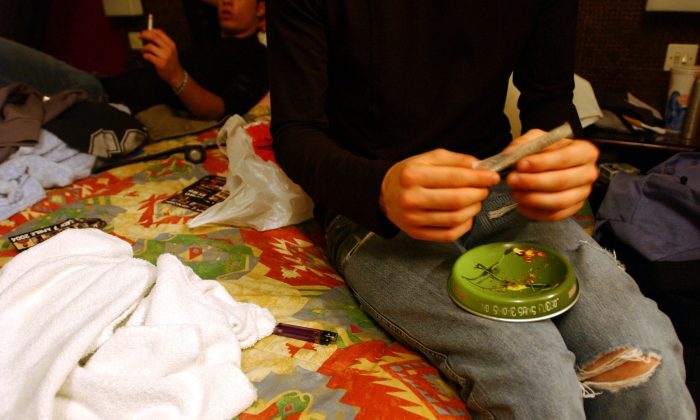 An Italian student (R) prepares a cigarette with tobacco and marijuana during a school trip to Strasbourg, France May 2004. Frequent marijuana use in the teenage years has been associated with permanent brain damage. (Marco Di Lauro/Getty Images)
Health News

NEW YORK—Most people do not think that smoking a joint or eating a pot brownie will have health consequences.

And although marijuana does have fewer known health risks than tobacco or alcohol, it is far from harmless—especially for developing brains.

One study in New Zealand followed over 1,000 people for 38 years. The study found that those who frequently used marijuana starting in their teenage years suffered permanent brain damage. On average, the IQ of these heavy users dropped by eight points.

Other studies show that people who started using marijuana in their mid to late teens are less able to concentrate and reason abstractly.

Joe Schrank, a social worker who specializes in addiction recovery, said that even though adolescent’s brains have stopped growing, they are still forming. And that makes them vulnerable to drugs.

“They’re like wet cement, so they can’t tolerate intoxication—whether that’s with alcohol or with marijuana,” he said.

And people who start using marijuana and other drugs before their 20s have a much greater risk of developing long-term problems, Schrank said.

The science on other health risks is less clear.

When smoked, marijuana irritates the lungs in the same way tobacco smoke does, although it is not clear whether it is linked with lung cancer.

Smoking marijuana can also raise a person’s heart rate by up to 100 percent—raising the risk of a heart attack, especially in those who have pre-disposing factors like old age or an existing heart condition.

Some research also suggests that marijuana is linked to depression and anxiety.

Schrank said that general unhappiness associated with marijuana use is what most commonly brings people into the recovery center he founded in Brooklyn.

“Their lives are sort of stuck in the mud. … Sometimes they’re not doing well in college or in work,” he said.

“It’s not like alcohol where people come in on the heels of a crisis with stitches or crutches. … It’s much more about being not happy in their life.”

Marijuana is the most common illicit drug in the United States.

The potency of marijuana has risen nearly fourfold since the 1980s.

About 9 percent of users become addicted to marijuana.