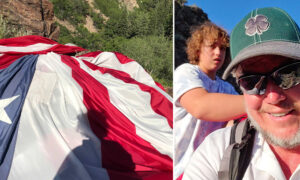 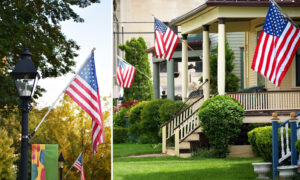 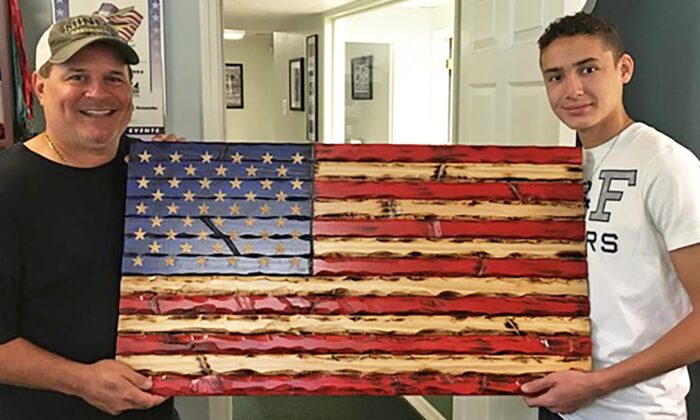 A 15-year-old boy has raised over $13,000 in donations for homeless veterans, special-needs children, and first responders by selling and donating wooden flags he carves himself.

In 2019, Lorenzo Liberti met a homeless veteran while serving meals at a food pantry with his church youth group. The tenth-grader. from Lakewood Ranch, Florida, couldn’t understand how someone who had served the country ended up abandoned, he told CNN.

“He inspired me to be the change and make a difference,” Lorenzo said.

Lorenzo’s father wanted him to be productive over the summer, so he started tinkering with wood, he said.

After Lorenzo finished his first flag, people in his community wanted their own. So, he began selling his “Heroic Flags” to raise money for “forgotten heroes.”

Lorenzo has made about 60 flags since he started in November last year. Each flag takes about 15 to 20 hours to make. That’s over 1,000 hours of work he has spent carving and painting.

Lorenzo’s mother is a health care worker in the Sarasota Memorial Hospital network. When the pandemic first rocked the nation, Lorenzo saw “the dedication (first responders) have to the communities,” and decided to include them in his mission.

“We went to war against the virus. Our new soldiers are wearing scrubs instead of camouflage,” Lorenzo said. “I thought it would be fitting to honor our new heroes with my flags.”

With this new direction, Heroic Flags has gained a lot of local and national attention. The website sold out of flags within 45 minutes of appearing on Fox and Friends.

“I have a long waiting list of people still wanting flags,” Lorenzo said.

Lorenzo wants to raise $50,000 to make flags for the hospitals most impacted by COVID-19 in each state and has raised $13,641 so far. The net proceeds will go towards homeless veterans, “as their needs have not diminished during the pandemic,” he said on his GoFundMe.

His ultimate goal is to get his heroic flag in every house in America, including the White House.