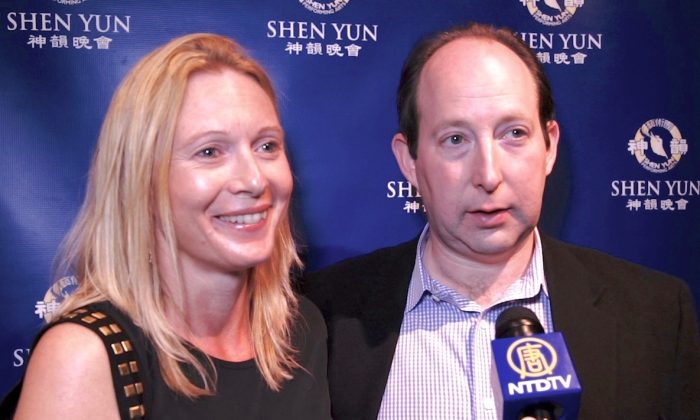 AUSTIN, Texas—The broad appeal of a Shen Yun Performing Arts performance has shown to be appreciated by professionals in all walks of life.

Just ask Alex Greystoke, CEO of tripchamp, who attended the March 22nd performance in Austin with his wife Lyanne, and loved it.

“I thought it was excellent,” said Mr. Greystoke.

“I loved it,” said Mrs. Greystoke, a software engineer. “Absolutely loved all the animation and how they brought [it] into the stage. It flowed. Really just flowed from one thing to the other. It was really great.

According to its website, Shen Yun takes its audience on a 5,000-year journey to a rich Chinese culture, at a time when earth existed in harmony with heaven, in a land with heroes and sages, dragons and phoenixes, and emperors and immortals.

“It’s amazing. It’s a very rich history,” said Mr. Greystoke of China’s once-rich culture, that’s unfortunately been wiped out by communist rule over the last half-century. “I think that the history and story telling is very important.”

Through classical Chinese dance, a symphony that combines both Eastern and Western music, exquisite costumes, and an animated backdrop, Shen Yun tells the story of China’s history.

“It was absolutely truly magnificent,” said Mrs. Greystoke. “We absolutely, thoroughly enjoyed it.

“The music was wonderful. We are going to be buying a CD of this performance. It was fabulous, really fabulous.”

Mr. Greystoke, who said he meditates, found it disturbing to find out that people in China today can be arrested and jailed for meditating, as Falun Gong practitioners are.

Falun Gong (also called Falun Dafa) is a spiritual meditation practice that cultivates truthfulness, compassion, and forbearance that has been outlawed in China today.

“I’m going to be looking up Falun Gong at the end of this,” said Mrs. Greystoke.

“The music is really awesome,” said Maria Lopez, a hotel manager, who also took in the March 22 performance in Austin. “It’s so colorful and beautiful. Their costumes are really amazing.”