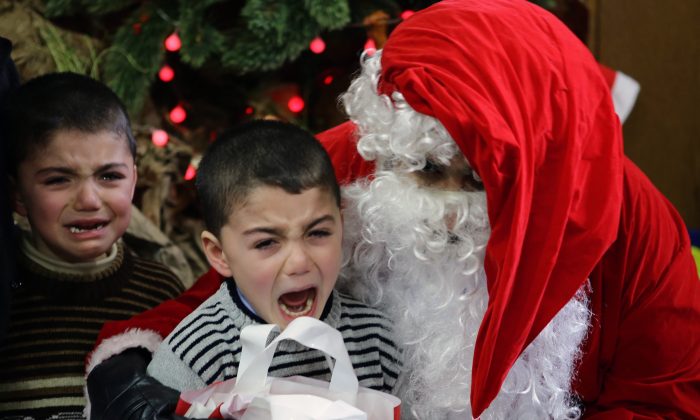 Syrian boys cry as they are pictured with Santa Claus at a kindergarten. (LOUAI BESHARA/AFP/Getty Images)
Life & Tradition

At this time of year it is difficult to ignore the image of Santa Claus or, as we still often call him in the UK, Father Christmas. His face is on billboards, magazine covers and TV adverts, looking to sell you anything from fizzy drinks to a new sofa. Santa Claus is the figurehead of the most important annual economic and cultural event not only in the advanced industrial economies, but far beyond as well.

More than this, of course, he is also a magical figure that appeals to children the world over. Santa remains closely associated with St Nicholas, the patron saint of children, whose legend adds a degree of religious legitimacy to the activities of our contemporary gift giver.

Yet what is most striking is that Santa Claus is not a character solely confined to storybooks and the imaginations of advertisers. Rather, for six weeks of each year he is a very real person, living and working in department stores, shopping centres and a host of festive events up and down the land. He is a man that is spoken to, laughed with and, perhaps most importantly of all, believed in and trusted.

What is it like, therefore, to take on such responsibility and actually be Santa? Well, as part of a larger project into the economic and organisational dimensions of the season, I was able to talk with a number of such men in an attempt to find the answer to this question.

The Santas I spoke to were not your run of the mill men in suits. These were performers who were genuinely committed to the role, often investing their own time and money into ensuring they had the best costumes, the most convincing make up, and that they were fully schooled in the myths and legends that surrounded the character. Perhaps not surprisingly, these were the men that frequently worked in the leading stores, and attended the top corporate parties, all for the highest rates of pay.

Not that pay itself was that important. Rather, what seemed to be the primary motivation for these men was the sense of recognition they experienced as the perceived embodiment of the ideals and virtues embedded in the Santa Claus mythology. This was particularly emphasised in their instance that one could not simply act as Santa, one had to “be Santa”.

This led to a great emphasis being placed on ensuring, in any professional encounter, the needs of the child were always prioritised. It was also considered equally important that they were able to demonstrate a comprehensive knowledge of the world of Santa, such as where he lives, what his reindeer are called and even the various origin stories created for him by the world’s storytellers. Most importantly of all, however, was the firm conviction that a performer should always continue to be Santa, whatever the provocation.

Unfortunately, such provocations were not as uncommon as one might hope. Often these were without malice and involved, for example, the tales of children suffering from bereavement or family breakup who would then ask Santa to “put things right” for Christmas. This required significant acts of emotional labour on the part of the performers who had to be seen to be reassuring and jolly, while holding back their own tears.

At other times, however, such emotional management was required to contain fear and anger rather than grief. Many reported, for example, an increasing requirement that they walk around stores and shopping centres. This was an activity that often left them vulnerable to abuse, both verbal and physical. One performer even recounted his experience of an attempted mugging; a situation he eventually managed to diffuse by explaining to his would be assailant that everybody knows that Santa is like the Queen and that, “he doesn’t carry money”.

Alongside such tales of abuse, there were familiar stories of long hours, poor facilities and ever harder working practices that resulted, as one performer recounted, in having “elves” whose primary responsibility seemed to be constantly telling him to speed up the flow of children through the grotto.

It is worth remembering that despite the obvious pleasure and sense of esteem these men acquired from performing the role it is, to all intents and purposes, a service role that brings with it all the associated discomforts and challenges.

As in so many other magic factories, therefore, the creation of the Christmas illusion is not itself an act of magic but one that relies on the skills, effort and occasional exploitation of those who work on its frontline.

Philip Hancock received funding from the British Academy in order to undertake part of this work.