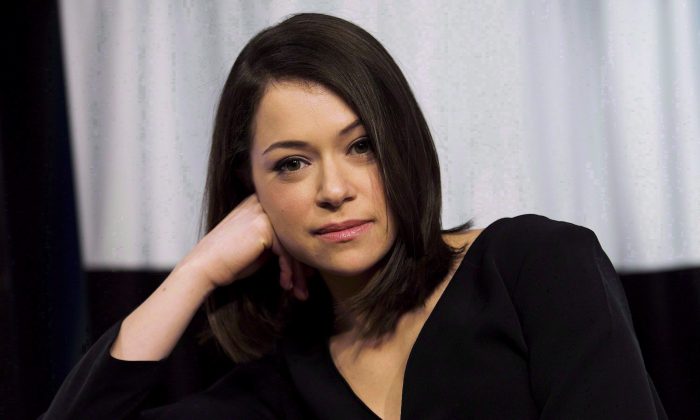 Tatiana Maslany, often regarded as the hardest-working woman in TV, was enjoying a rare chance to “be a homebody” while vacationing in Prague last week when duty called—but for celebratory purposes.

The Regina native learned she had received her second “best lead actress in a drama” Emmy nomination, for playing multiple clones with varying personalities and accents in “Orphan Black.”

The news was exciting and even more shocking the second time around, Maslany said, noting it’s a “super big honour” for the Toronto-shot show that airs on Space and BBC America.

“‘Orphan Black’—hearing that name at the Emmys opposite shows like ‘Transparent’ and ‘Mr. Robot’ and ‘House of Cards,’ all of these incredible, innovative shows that are really changing television,” marvelled the 30-year-old in a phone interview.

“It’s just cool to be a part of this awesome movement of TV taking over where cinema has lacked.”

Maslany was also nominated for an Emmy for her “Orphan Black” roles last year and a Golden Globe in 2014. The sci-fi thriller recently aired its fourth season and the next season will be its final one.

This Emmy nod comes after a big year in which she not only had to play new clones, she also took on several other projects—from “BoJack Horseman” to “Robot Chicken” and the film “Two Lovers and a Bear.”

“I felt really creatively stimulated this year,” said Maslany. “The two movies I got to do over the hiatus before the fourth season were really near and dear to my heart and just reignited my excitement about acting and gave me a new perspective.

“I got to work with amazing actors and directors and that stuff just opens your mind. So as tired as I was, I guess I felt really rejuvenated and ready to play more in ‘Orphan Black.”’

Maslany has a couple of goals for her second Emmys.

“Just bring a snack,” she said, “and I’m going to try to get to tell Gaby Hoffmann how incredible I think she is.”

Maslany is among many Canadians nominated for 2016 Emmys.

The second season of the Alberta-shot series “Fargo” picked up a total of 18 nominations, including several recognizing the Canadian crew.

Martin Lee, Kirk Lynds, and Michael Playfair are nominated for sound mixing; Elisabeth Williams and Shirley Inget are up for production design; Jackie Lind is in the running for a casting Emmy; Gail Kennedy, Joanne Preece, Gunther Schetterer, and Danielle Hanson are named in the non-prosthetic makeup category; and Chris Glimsdale, Judy Durbacz, Penny Thompson, Cindy Ferguson, and Tracy Murray are being recognized for hairstyling.

Nelson, B.C.-native Thomas Middleditch was nominated for best lead actor in a comedy for his role as a tech tycoon in HBO’s “Silicon Valley.”

Samantha Bee of Toronto earned her first career Emmy nomination, for writing on her variety series “Full Frontal with Samantha Bee,” which airs on TBS and the Comedy Network. The show, however, didn’t get recognized in the outstanding variety talk series category, which many saw as a snub.

Both Michael J. Fox and Molly Parker are up for trophies for guest parts.

Parker is nominated for playing deputy house minority whip Jacqueline Sharp in Netflix’s “House of Cards.” This is the first Emmy nod for 44-year-old Parker, who hails from Maple Ridge, B.C.

Other homegrown talent nominated for Emmys this year include:

—Ellen Page, who as executive producer on Viceland’s “Gaycation With Ellen Page” is up for best unstructured reality program. She’s nominated along with Vice Media co-founder Shane Smith, who is also up for the outstanding informational series or special Emmy for the HBO series “Vice.”

—More than a dozen Canadians are named in two nominations for the “Vikings” episode “The Last Ship.” The dramatic mid-season finale is up for sound editing—with the competition including Paula Fairfield for “Game of Thrones”—and the special visual effects Emmy.

—Also nominated in the special visual effects category is Matthew Rouleau for “Game of Thrones.”

—Another Canadian “Game of Thrones” nominee is Greg Middleton for best cinematography for a single-camera series.

—Toronto-born Vanity Fair editor Graydon Carter is nominated in the best documentary or non-fiction special category as an executive producer for “Everything Is Copy—Nora Ephron: Scripted & Unscripted.”