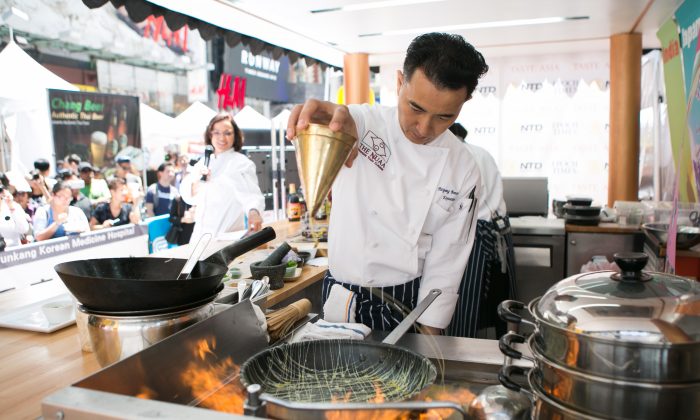 NEW YORK—”Tell me what you eat, and I’ll tell you who you are.” These oft-cited words from the 19th century French gourmet epicure Jean Anthelme Brillat-Savarin reflect our common desire to understand a culture through eating its food.

At Taste Asia Asian Food Fest in Times Square June 26-27, New Yorkers have a chance to learn a tonne. Between the cultural performances, cooking demonstrations from master chefs, and food vendors from the city’s popular Asian restaurants, people could get to know more than a dozen Asian countries—all in one go.

Now in its second year, the gastronomic festival hosted by Epoch Times and its sister media company New Tang Dynasty Television has expanded to include a lineup of renowned chefs inspired and influenced by different Asian culinary traditions. Throughout Friday, Taste Asia’s outdoor kitchen where celebrity chefs cooked up some of their signature dishes for lucky New Yorkers to try, was definitely the main attraction.

Each chef was dedicated to discovering new flavors and creating new dishes by traversing Western and Asian cuisines, while respecting the age-old traditions within each realm.

Esther Choi’s cooking philosophy is fundamentally to respect and master the culinary arts of her ancestors.

Esther Choi, for example, takes to heart her grandmother’s traditional Korean cooking methods, while remaining true to her roots in New Jersey and her Western culinary training. One of the dishes served at her restaurant located inside Chelsea Market, Mokbar, is disco fries—the quintessential Jersey diner food, but topped with ramen gravy, cheese curd, kimchi, and nori (Japanese seaweed).

Yet another example of Choi’s creative combinations of traditional Korean and Western was the dish she cooked on Friday: spicy rice cakes (called tteokbokki), with brown butter, minced pork, spicy gochujang (pepper) sauce and white kimchi.

Despite Choi’s desire to incorporate new ideas and techniques into Korean cooking, she says her cooking philosophy is fundamentally to respect and master the culinary arts of her ancestors.

“I think it’s important for people like me, the second-generation Asians, to really respect the methods and traditions and pass that on as well,” she said. “I always stress how important that is. That’s how I would pass it on to people I would teach.”

Without a doubt, Asian cuisine is now being reinvigorated in the Western world.

Having learned from the best at Japan’s Tsuji Culinary Institute, Bouley understands the importance of respecting the integrity of Japanese cuisine, while honoring his own style of French cooking. Combine them together, and you get a dish that’s truly unique.

“You have to understand the techniques and ingredients to really respect them. You can’t just grab things and throw them together,” Bouley said, eschewing the type of “fusion cuisine” that usually does just that.

He explained that Friday’s dish combines two dishes that are steeped in each cuisine’s history: the French flan, and the Japanese chawanmushi, a traditional appetizer typically made from steamed egg custard.

“Each dish has evolved over a long, long period of time,” Bouley said. “They complement the cultural history of each dish, and do not distract.”

Without a doubt, Asian cuisine is now being reinvigorated in the Western world.

Brian Tsao, himself a chef who mixes Western cooking with Asian flavors, foresees Korean cuisine exploding onto the food scene in the next few years.

People are more open to trying new foods these days, but Tsao says there’s more work to be done.

He observed that in New York City, for example, Asian cuisine is still mainly patronized by Asian communities.

“It’s almost intimidating for a lot of people to go to Flushing. Or it’s intimidating to go to K-town [Korea Town] unless you know someone who regularly goes there,” Tsao said.

But he sees the barriers slowly breaking down.

On Taste Asia’s second day on Saturday, 12 chefs will compete in an outdoor culinary competition to determine the best in cooking the five traditional cuisines of China: Cantonese, Sichuan, Northeastern, Huaiyang, and Shandong.