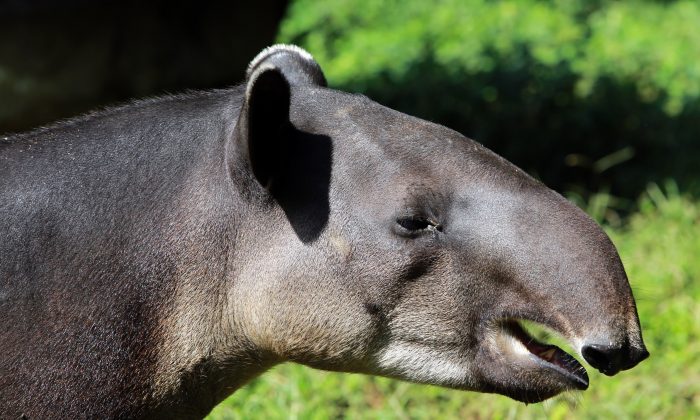 Tapir: 8 Photos of Tapirs Because They Look Awesome

Tapir photos are being shared as a way to brighten people’s day on Twitter today. So here’s 7 photos of tapirs.

Some quick facts about the animals:

-They mostly live in South America (three species), while another species lives in Asia, in Burma, Thailand, and several other countries.

-All species are classified as endangered

A young Malayan tapir eats next to its mother in their enclosure in the zoo in Leipzig, eastern Germany, on March 27, 2013. In the other photo, it walks alone. (Jan Woitas/AFP/Getty Images)

A baby tapir with its mother at the zoo in Amneville, France in July 2013. (Jean-Christophe Verhaegen/AFP/Getty Images)

A baby tapir named Parima enjoys some leaves at the Tierpark Hagenbeck zoo in Hamburg, northern Germany, on May 15, 2012. (Daniel Reinhardt/AFP/GettyImages)

A tapir at the zoo of Cali, department of Valle del Cauca, Colombia, on November 9, 2010. (Luis Robayo/AFP/Getty Images)

A Tapir swims in a pool and eats grass at the zoo in Masaya, Nicaragua on September 25, 2013. (Inti Ocon/AFP/Getty Images)