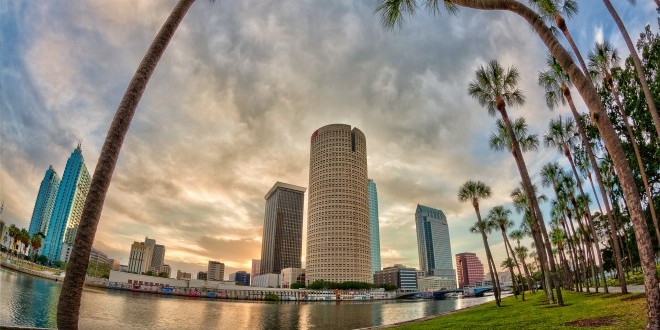 Tampa: A Tandem of Tempo and Timing

Just as dinner was served at Tampa’s revered Columbia Restaurant in Ybor City, the dining room lights went down and a procession of flamenco dancers commanded the scene. Kinetic energy enveloped the room as the dancers’ brilliantly choreographed moves skillfully interwoven with a seductive flair captivated all. The audience was smitten—not a mouthful of food left a plate.

Interestingly, the 40-minute performance encapsulates the considerable upbeat tempo exuded in Tampa, located on the west coast of Florida on Tampa Bay, near the Gulf of Mexico.

Florida recently passed New York State as America’s third most populated location, but unlike the Empire State Building which features NYC as its centrepoint, Florida has no one-hub location. The most sought locations for visitors continue to be Miami and Orlando respectively.

Tampa is smartly taking old buildings and using them in new ways.

Miami is the de facto capital of all Latin America and South Beach has long been the epicentre for where the “beautiful people” party. Orlando, of course, is the home of “the mouse,” as in Mickey and Disney.

Tampa’s goal in 2015 is unmistakably focused and resolute—to become the Sunshine State’s most culturally enriched and diversified community. Long thought by many to be a joint venture, as in Tampa/St. Petersburg, Tampa is now developing a compelling solo narrative, rightly celebrating its rich past but fast-tracking a 21st century approach where verve and elan flourish.

Tampa’s downtown is a shifting beehive hub of activity, with locations in and around the waterfront showing new faces. This reinvention is part of a plan to elevate Tampa far beyond the one-note band that plays in nearby Orlando, or the fleeting party scene which currently calls South Beach its home base.

Tampa is smartly taking old buildings and using them in new ways. Case in point: the Le Méridien Tampa was formerly the city’s century-old Federal Courthouse and has been transformed into a hotel that juxtaposes the building’s stunning architecture with modern touches.

Tampa’s past also carries on to the present day with the aforementioned Columbia Restaurant. Located in the heart of Ybor City, it has been operating since 1905, making it Florida’s oldest restaurant.

Ybor City in northeast Tampa was founded in the 1880s and dates to when Cuban, Spanish, and Italian immigrants settled here. The area became famous for the hand-rolling of cigars, and in fact is named after a major cigar manufacturer—Vicente Martinez Ybor. At one time, Ybor City was the world’s leader in cigar manufacturing.

Seventh Avenue is ground zero and possesses a wide array of interesting shops and Latin memorabilia. Be sure to stop at Ybor City Museum to fully appreciate the history and continuous contributions of this fascinating area.

The counterpoint to Ybor City lies in the South Tampa area of South Howard Avenue, known affectionately as SoHo. This stretch of 7th Avenue has been the take-off point for the avant-garde—young and old seeking a connection point where sophistication without snobbery has taken root.

The Epicurean Hotel opened in December 2013 and was a parking lot before being turned into an upscale boutique lodging setting. Part of the Marriott’s Autograph Collection, the Epicurean is an excellent example where people mesh to learn more about the culinary arts and savour moments of conversation and culture.

SoHo’s allure is its walking dimension—ditch the car and stroll about. At the extreme southern end of 7th Avenue is the intersection with Bayshore Boulevard, claimed to have the longest continuous sidewalk in the world at 4.5 miles. The Boulevard provides the ideal intersection of land and water—a stunning setting whether day or night.

Quality food offerings are also on display. Daily Eats has an electric atmosphere that’s gained a big following for justifiable reasons. Breakfast is offered all day and it behooves any visitor to ask for their renowned Shredder Bowls.

The night-time scene is rapidly evolving—the push coming from people relishing food and drink as much more than sustenance and grog. Leading the way is Ava, co-owned by former Tampa Bay Rays and current Chicago Cubs manager Joe Maddon. Ava earned a four-star rating by Tampa Bay Times food critic Laura Reiley after being opened only one week and the resulting buzz is pushing the boundaries of all participants for even higher efforts.

Tampa’s tandem of tempo and timing is an intoxicating brew—a multi-faceted enclave that goes far beyond the nondescript big-box lowbrow pedestrian offerings found too often in Florida. The seeds are indeed germinating.