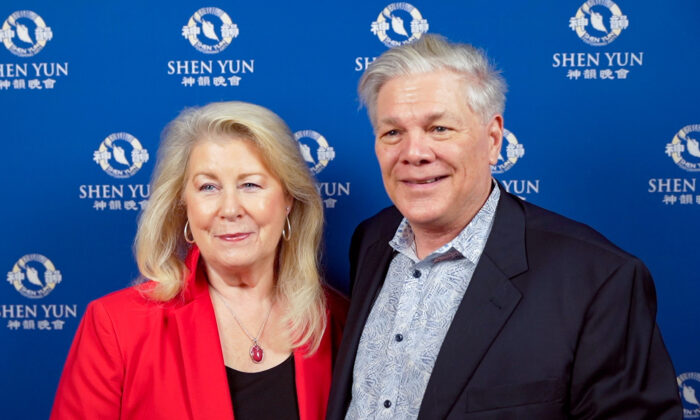 Delighted by the artistry and message, Mr. Jensen said, “It is a once-in-a-lifetime experience—awesome!”

“It’s the joy of the performance that comes through, even with the messaging, even with understanding some of the plight of people, it’s the messaging and the art form that will just lift you up and take you away,” Mrs. Jensen said.

“It’s so much more than just an idea [that Shen Yun] brings back to life—it’s time to go back to the China that’s supposed to be, not the China that was imposed by other men,” she added.

Since Shen Yun’s inception in 2006, its mission has been to revive China’s 5,000-year-old traditional culture. The age-old culture has been on the brink of extinction since the Chinese communist regime seized power in 1949. Shen Yun says its performance this year demonstrates “China before communism.”

“We support everything that it stands for. We support China before communism and would love to see it come back to its full glory,” said Mrs. Jensen.

“It’s an ancient, ancient culture. To think that it could be erased is really hubris on [the CCP’s] part.”

Mr. Jensen was amazed by the company’s patented method of integrating a 3D animated backdrop with the stage performance. It allows the performers to magically travel back and forth between the stage and the background projection.

“Technically, it’s stunning,” he said. “The dancers appear to come from the digital screen and background, and then appear on the stage—the timing is just extraordinary.”

“Between the pianist and the signer and the lyrics to the song, it all conveyed beautifully to the audience … there was so much emotion—it was beautiful,” Mrs. Jensen said.

Along with myths and legends, Shen Yun presents mini-dramas depicting the persecution of Falun Dafa (also known as Falun Gong), a meditation discipline based on the principles of truthfulness, compassion, and tolerance.

In 1999, the CCP launched a persecution campaign against the spiritual practice, subjecting practitioners of the practice to unprecedented imprisonment, torture, and abuse.

“The persecution and the genocide of the Falun Dafa and the Uyghurs must end,” Mr. Jensen said.

“I’m so glad that this performance is here to spread the word because it’s so important to so many millions of people here as well as in China,” he said. “Our country as well as others needs to address this strongly!”