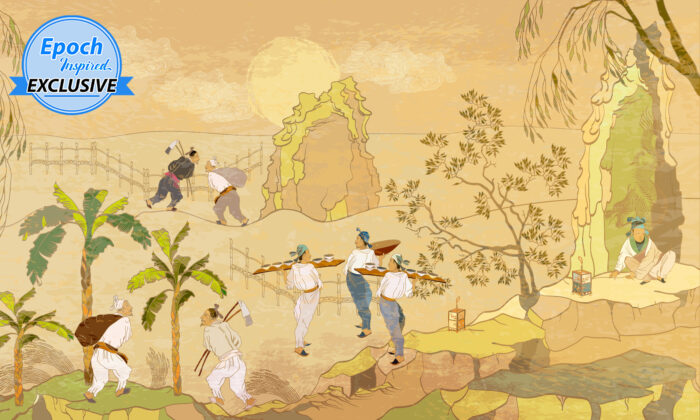 Our “Tales of Wisdom” series aims to highlight important morals and inspire a cherishing of the age-old virtues that can uplift our souls and help us return to tradition. We hope you will enjoy reading this.

At times, we reach a dead-end in life and accept things just the way they are. But traditional cultures and wise men across the world have said it takes just one compassionate thought or deed to actually change things for the better.

This inspiring tale of wisdom passed down over the years in traditional Chinese culture—long before the communist party took over China—talks about how one good thought, born out of compassion, can have life-transforming effects.

The fable rolls back to the times in the western mountainous area of Zhejiang province, where lived a young, lazy man who loved to eat. His was a dishonest life, marred with theft, gluttony, and lustful desires.

He often stole from his friends and family in the village. The villagers also constantly complained about how he didn’t live out even a single day of honest work, and often, harassed the village women. Frustrated by his actions, they wondered that what awaited him was nothing but a dreadful end.

Then one fateful day, a calamity befell the village.

Suddenly, the village was enveloped in dark clouds, roaring thunder, and lightning filled the sky. It seemed like this was the end, and maybe the village wouldn’t survive. Almost everyone was trying to save themselves from the tragedy that was unfolding.

Villagers started to flee from the fields to their houses so that they could save themselves from the heavy downpour and be with their families.

However, the lazy man did the exact opposite of what the villagers did. Instead of staying home with his family, he had the sudden urge to visit the fields. Witnessing his impetuous action, his family members warned him about the dangers of going out at that time.

Seeing that he paid no heed to what they said, they cursed him and said, “Go, go let the lightning kill you, and when that happens, we might not be there to help you.”

Undeterred by all the blaspheming, he picked up his hoe and rushed to the fields, as this was not the first time he had heard such crude words and was pretty used to it as no one in the village seemed to respect him.

When he arrived at the wheat fields, he saw that they had been flooded and was dismayed by the sight. However, he knew he had to act quickly to save the crops. With firm determination, he told himself, “I need to do something, or all the hard work the villagers have put in will be for naught, and it would mean the entire village would be left starving.”

Despite the heavy rains and roaring thunder, the man rolled up his sleeves and got to work.

All by himself, he picked up the hoe and started to work on the wheat fields, one row at a time, supporting the wheat stalks. Not once did he think he was going to do this task all by himself, and that he was risking his life just to support the village during this crucial period.

The ancient wisdom says that the heavens and the divines saw his selfless thought of helping his fellow men and not worrying about what would happen to him and that, miraculously, after he finished working at the fields, the clouds cleared.

The downpour stopped and the sky once again became bright. It was as if the divines were truly rewarding the once lazy man for his kindness and selflessness.

It is like what Buddha Shakyamuni (Siddhārtha Gautama) has said: “We are what we think. All that we are arises with our thoughts. With our thoughts, we make the world.”

Indeed, one positive thought rooted in kindness can propel you in the right direction, which in turn can lead to a successful outcome.

The same was experienced by the lazy man after his selfless good deed. Everything changed for him. Even though he was physically drained, mentally and spiritually, he felt transformed and uplifted. He realized the significance of his life and each action that he takes, and he promised to change for the better.

As the fable goes, seeing his unbelievable transformation, not long after, everyone in the village started to respect him. He took up the path of true kindness and worked diligently from that day forth.

This story serves to remind us that one compassionate thought has the power to guide us back to the light during those dark and dismaying days of our life.