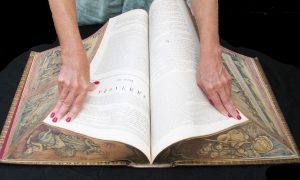 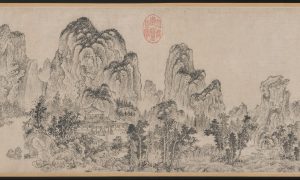 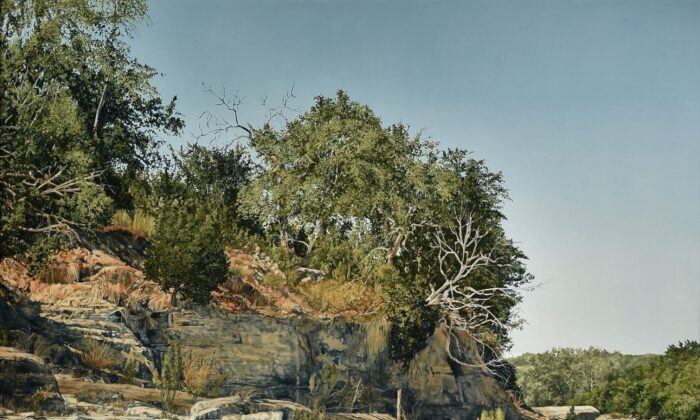 A detail from “Stepped Rocks With Water,” 1984, by Nancy Conrad. A scene of the Pedernales River near Johnson City, Texas. Oil on Canvas, 66 inches by 66 inches. (Courtesy of Wayne Barnes)
Fine Arts & Craftsmanship

Taking You There: ‘Stepped Rocks With Water’

By Wayne A. Barnes
Print

After 29 years in the FBI, I investigate privately, including cases of recovering stolen art. That puts me on email lists for major auction houses. Occasionally, I bid and am fortunate to add a piece to my own collection.

One painting from last year was “Stepped Rocks With Water,” a 1984 oil painting by Nancy Conrad, a Texas artist. She was commissioned by the Texas Commerce Bank to create 10 paintings, one for each branch, with the largest being the one I bid on successfully. I imagined I wouldn’t have much competition as the piece is 5 1/2 feet square, large for a painting today.

The auction house in Houston, Simpson Galleries, thought the opening bid would be around $1,000 and that it would eventually go for around $2,000. They had a lot of experience with Conrad paintings. When the bidding was almost over—and I only had so much money for this—I was sweating bullets as the numbers went up, past my then limit of $3,500. It finally stopped at $4,750. The gavel slammed down and it was mine. Another few hundred more shipped it to me in Florida, putting the figure just over $5,000.

Some pieces of art move me so I am compelled to write about them—what they look like, but more often, how I see the scene in its own history.

You see the rocks, and you can feel them. They are as hard as they look, yet warm to the touch of your bare feet, and your shoes and socks are nowhere to be seen. If they get too hot, you can always wade into a shallow pool of soothing cool, and you will be refreshed.

A spring, just up the hill, slowly pumps out heartbeats of water, which run as rivulets down the flat face of the stone to join the flow downstream.

You spin back around and observe just about every color of rock there is, from the white and pale yellow at your feet, up to charcoal striations through the rough edges, and then solid blackness that few rocks can claim. Above and beyond is a red-orange hue. The progression over the millennia that gave us this formation—an outcropping—worked its magic to make this scene among the most dynamic and picturesque.

For more than a thousand years there were Native American tribes here, many nomadic and proud. They did not build great cities, and left little mark on the land, for they lived with the land. They were the Karankawa, Caddo, Apache, Comanche, Wichita, Coahuiltecan, Neches, and Tonkawa. And this was well before Spanish missionaries came north to write their own history in Texas.

Then the Americans, in the youngest country at the time, began spreading west and fought their way through thicket, and over hill and dale. The hill country soon became their Hill Country.

Now stand before this scene, and breathe it in. Take yourself back—far back.

It is the dry season, and the river has become a stream. But there is still the music of water flowing over rocks and past boulders, then swirling in eddies.

Around the bend on the right comes an Apache brave and his young son. They walk without a sound, as few know how, but it is their nature. They stare into the shallows.

The brave unslings a bow from his shoulder and draws an arrow from his soft leather quiver. His son stands to his side and back a step, always learning from his father’s every move. Then, there, in the water, a dark shape moves, curving back and forth, its fins flashing in the midday sun. He is a beauty, and the boy can almost smell his dinner cooking over an open fire.

The father freezes, then signals the boy to come around him. The older man slides his bow into the boy’s hands, and he grasps it firmly. He notches the arrow his father gives him, and now it is he who looks down the shaft. His father makes silent hand signals, referring to the boy’s eyes and the spot where he must aim. It is a few inches closer than directly at his mark.

The boy is concentrating as he watches the movement of his quarry several feet away. After three similar motions, he sees a pattern. Slowly, ever so slowly, he draws back the string and takes aim at an unaware fish.

The arrow slashes through the surface, bending its trajectory toward the target, and then through the fish. After a moment of deathblow struggle, the fish is quiet and is raised from the water. The pride of the father in his son cannot be hidden, and he places his hands on his small, bare shoulders. Their family will eat well tonight, and the boy will feed his own family in the years to come.

A hundred years later, American pioneers, whose ancestors had settled in Georgia well before it became a state, have moved west a thousand miles. They are a small part of the manifest destiny that unfolded in the westward expansion. Now, from around that very same bend shouldered by yellow-white steps of rocks, and walls of layered stone in orange and black, a father and son pick their way to the edge of the stream.

The father holds a fishing pole that has the spring of a freshly cut sapling. A long string leads from its end down to a small, barbed hook. The lad and his dad survey the scene. The boy lets out a shout of glee when he sees a long, dark shadow in the shallows.

His father steps back a few feet and pulls up a clump of grass. He shakes out the dirt to find a worm. He shows the boy how to set it on the hook. He ties a little piece of wood a couple of feet up the line that will tell them when a fish is curious about their bait.

To the boy’s surprise, his father hands him the rod and points to where he should cast his line.

This is a big day for the young man. He grasps the thick base of the wood firmly. He swings the line out over the water, and the end kerplunks into the slow-moving stream. Then he waits.

In a few minutes there is a nibble, and the bobbing wood stirs as something toys with the worm. Patience, patience—and the boy looks to his father. He gets a confirming nod and looks back at the line in the water, the float still bobbing. Then he yanks the rod to the right.

The float goes under and the rod bends down toward the water, the boy holding on in all his excitement. After a few moments of battling, the small boy pulls the fish to shore. It is plenty enough for dinner for their entire family.

It was a special moment, one a father and son share, and so will this boy, in another generation, with his own son, perhaps at this very same magical spot. These steps of rock, and walls of red-orange and black, and dozens of decades of slow-growing, overhanging trees will be witness to what no one man could see. For the nature around, man’s passing through is but the blink of an eye. This picturesque and age-old terrain has drawn people to the shores of this stream, and it will do so for generations.

Hear the blowing breeze through the windswept trees and the music of flowing water. Feel the warmth of smooth, yellow-stepped rocks beneath your bare feet. Cool them off in a shallow pool at the water’s edge. And don’t be surprised if you find an ancient arrowhead in the pool by your toes.

Breathe in this special place. You might see a flash of light in the water, a reflection from the shiny side of a big old fish, whose many great-grandfathers fed the people who came before you and settled this land.

This article, reprinted with permission, was originally published on WayneBarnesWriting.com