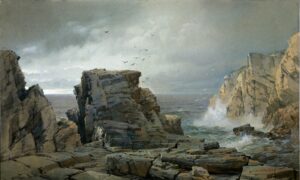 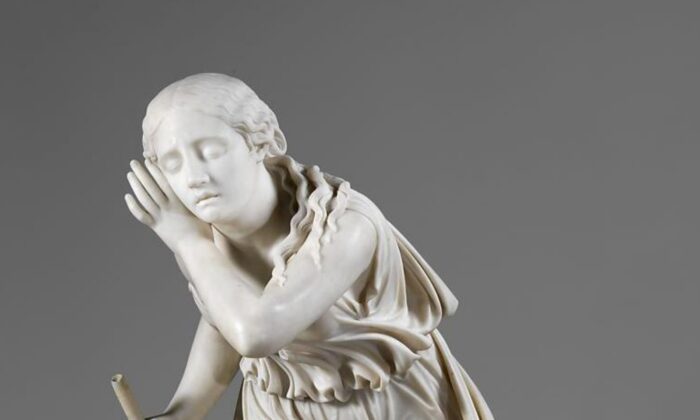 Taking You There: Love Amid Catastrophe With ‘Nydia, the Blind Flower Girl of Pompeii’

Several years ago, I commissioned a fine artist to paint my girlfriend’s favorite photo of her two teenage daughters. They were at New York’s Metropolitan Museum of Art, one with her arm extended, tossing a coin into a large water bowl.

When the painting was completed, I was surprised that the artist had replaced the bowl with a statue. He said the sculpture added depth and enhanced the picture. I had to agree. But what was the piece? Research revealed that it was “Nydia, the Blind Flower Girl of Pompeii.”

After nearly three decades in the FBI, my investigations have taken me to many cities. I always visit their museums. I finally saw the statue of Nydia in the Art Institute of Chicago, but it was 800 miles from The Met!

Another investigation took me to Birmingham, Alabama. In their Museum of Art, to my surprise, there was another statue of Nydia.

How was this possible? Was she on loan? How could there be more than one, even more than two?

The Birth of Nydia

Nydia was sculpted in 1853–54 by American Randolph Rogers. The quality and emotions portrayed in the piece are as riveting as the best of the ancient Greeks and, in the view of some, as Michelangelo had conceived.

An important facet of the industrial revolution was the ability to mass produce. Eli Whitney, of cotton gin fame, created a musket with interchangeable parts and contracted to sell 10,000 of them to the young American government in 1798. Before, if a part broke, a whole new musket was needed. But not anymore.

Rogers was not dealing with a weapon of war. He stood in front of a good-sized chunk of marble, and there was only one way to make what he produced: the old-fashioned way, with a mallet and chisel.

Rogers was born in 1825 in New York. He enjoyed wood carving but was unable to find work as an engraver. While he was working as a clerk in a dry-goods store, his employer recognized his natural ability for sculpting and paid the young man’s way to Italy. He studied in Florence and opened his own studio in Rome in 1851. He lived there the rest of his life, producing dozens of works for European and American commissions.

Had he remained in America, his stone of choice might have been New England granite. But living in Italy, his blocks came from the same mountain where Michelangelo had chosen his raw material to make “David,” “Moses,” and “La Pietà.”

Nydia and Her Siblings

Rogers’s “Nydia” is three feet tall, sitting on a raised two-foot base. There is great detail, with the lean of her body, a back toe barely touching the ground, the lavish folds of her tunic, the curls in her hair, and the distraught expression on her lovely face. She was so well-received that there would have been a market for more. Yet there was only one. Why should that have been so?

Anyone who has strolled the museums of the world would realize that Rogers did something previously unimaginable. He and his studio of assistants created 167 images of Nydia in two sizes, each seemingly matching the original piece perfectly. It was an enormous quantity of art, but not mass produced, for each one had to be carved from a block of marble, carefully and lovingly chipped away. We can never know how many hours and days it took to bring each new flower girl to life.

Rogers didn’t particularly like working with marble, but he made the first one the model for all the rest. After sculpting just so many pieces, he left it to his studio assistants to carry on with the work. No record was found of their names, but how many exceptional artisans with such talent could there have been? It sounds like it means the earth and art lovers have the ability to travel to a local museum. Even the wealthy in the mid-19th century could have an “original” Nydia on their palatial estate.

Each of Frederic Remington’s bronze statues was cast from a single clay model. Lithographs and silkscreens mass produced two-dimensional replicas. But would Leonardo da Vinci have painted a second “Mona Lisa”?

The ancient Greeks created nearly identical statues, known as caryatids, ornate columns holding up tons of stone pediment on the Acropolis—but there were only six.

In today’s age of 3D technology, layers of space-age plastic could create a full-sized knockoff of the blind flower girl. But it would be just that, more of a curio-shop purchase and not a truly magnificent image in marble. In the strictest capitalistic sense, Rogers was providing a unique supply for an obviously broad demand.

She Was Given Birth in a Book

“Nydia” was the most popular marble sculpture of the 1800s. She is based on a character in the 1834 novel “The Last Days of Pompeii,” penned by British author Edward Bulwer-Lytton. His inspiration had come from a painting he saw in Milan in 1833, “The Last Day of Pompeii,” by Karl Bryullov, showing the epic catastrophe of the Mt. Vesuvius eruption.

Had Bryullov not visited early excavations of Pompeii the year before, this sequence of events from the painting to the book, and then the creation of a blind flower girl in marble, would have remained a story relegated to the ashes of Pompeii. Rogers captured a crushing moment of anguish, which we now look back on as a wonderful yet devastating representation of one individual’s plight when an entire city was lost through natural disaster.

The book was published nearly 1,800 years after the eruption, but the event was described at the time by Pliny the Younger. So there was accuracy to the backstory of life at the foot of Mt. Vesuvius, even if the tale was fictional.

Pompeii was a thriving metropolis of 20,000 people. It was the seaside showpiece of the Roman Empire, but volcanoes show no discretion for when and where they erupt.

In one of the greatest excavation projects ever initiated, hollow chambers were discovered in the volcanic rock. Holes were drilled into them and filled with plaster of paris, then left to set. When the pumice was chipped away, they revealed preserved, but disturbing, images of many individuals. One cast was of a dog. Now on display near the archeological dig, it will forever reveal how this four-legged creature suffered in agony when overcome by the deadly hot ash that blanketed the city.

Nydia would walk to the fields on the outskirts of the city where flowers grew. Many pick them for their color, but Nydia was drawn by their fragrance.

She played a three-string lyre on a busy street corner, singing a lovely song and selling colorful and sweet-smelling garlands from her basket. Passersby would give her money.

Glaucus was a handsome nobleman, said to be a bit of a first-century gadabout, who threw the best parties and was known for enjoying wine and dice. He learned that Nydia, a slave girl, was being abused by her owners and tried to save her. She had always admired Glaucus, his robust voice and assertive ways. Though not jealous of Ione, his betrothed, Nydia still fell in love with him, knowing it would be unrequited.

At noon on Aug. 24 in the year A.D. 79, the earth began to rumble and the ground shook. A glowing red appeared to the north, the mountain spouting fire and ash, sending a plume 10,000 feet into the sky. While it was traveling heavenward, people realized it was coming from a hellish place deep within the earth.

Lava moved down the five-mile hill, covering everything in its path. Above the flow were sulfuric fumes that strangled the breath of all living creatures.

Ash fell for many hours, not like a light winter’s snow, but layer upon layer of weight and pressure. The red-hot flakes fluttered down, paralyzing its victims in the permanence of how they had fallen in their torment at the moment of death.

Blazing projectiles were impossible to avoid. Vulcan was pitching an unending supply of fiery fragments skyward, which arced to the land with no consideration for wealthy or poor, master or slave, all racing to escape the inferno.

The streets were filled with smoke and death. It’s estimated that more than 12,000 would die in the next few hours. Walking wounded could not see their hands in front of their faces and stumbled through a suffocating gray-orange cloud.

Nydia’s first thought was of Glaucus, and how she could save him. In moments, they were together, with his lover, Ione, close by.

Thousands of people were trapped as the earth spewed its liquid death. It was only Nydia, whose blindness for all her years, placed her at an unexpected advantage in the smoke-filled streets.

She told Glaucus to follow her, and he did, holding Ione’s hand tightly behind him. Just ahead, Nydia dashed down the street, weaving through the sounds of people rushing and the injured screaming. She knew her way well through the darkness. The grief and the fear on her face, the anguish of the moment, and the dread that she might not succeed in saving Glaucus brought her to tears.

Down the streets they went, the wailing of so many nearby. Finally, they reached a place far enough away from the conflagration to be safe, but she knew Glaucus would never return the love of a slave girl. Later on, without peace, she drowned herself at sea.

The moment that Randolph Rogers chose to depict—this one scene from a lengthy book—brings us right there, with natural destruction at its worst. Yet it was through the eyes of a young, blind flower girl that all of this would be seen.