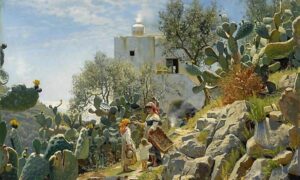 Taking You There: ‘At Noon on a Cactus Plantation in Capri’
0
Share Now
TelegramFacebookTweetEmailTellMeWeReddit
Copy Link 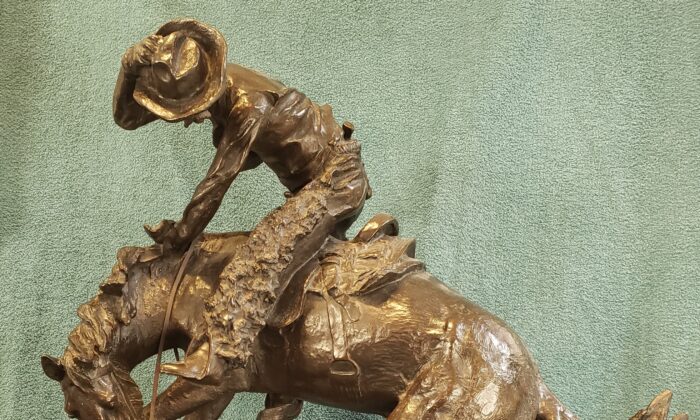 A detail of the “The Rattlesnake,” 1905, by Frederic Remington. Bronze sculpture; 23 inches high by 22 inches long by 10.5 inches wide. (Courtesy of Wayne A. Barnes)
Fine Arts & Craftsmanship

Taking You There: Frederic Remington Hurls You Into the Wild West With ‘The Rattlesnake’

There are eras in American history from the colonial days to the revolution, then Manifest Destiny, stretching our nation to the far sea. First came mountain men, then pioneers and buckskin heroes like Daniel Boone and Davy Crockett, “Wild Bill” Hickok and “Buffalo Bill” Cody, who captured our national imagination. The Civil War erupted and interrupted, but the westward expansion continued in the years that followed. Migration in growing numbers settled the vast territory of the American West. The golden spike completed the transcontinental railroad in 1869, an exclamation point in our nation’s history.

Frederic Remington was born in upstate New York in 1861 and reveled in this era like few before him. He was trained in art at Yale, but he also played football. An artist’s eye combined with rough-and-tumble experiences married within his personality. The West called to him. He found work as an illustrator for Harper’s Weekly but was also a field correspondent. The public’s desire for Western stories was insatiable.

His drawings went from merely accompanying his articles to paintings that gained a level of maturity so that even art critics placed his work on a unique pedestal. Albert Bierstadt was covering massive canvases with “Rocky Mountains” (1863) and “Among the Sierra Nevada Mountains, California” (1868), which played well back East and introduced Europeans to our glorious scenery. In the foreground of almost all of his paintings were miniature settings with daily life among teepees, wagon trains, or pioneer encampments. It was those tiny figures that Remington enlarged and which became the center of his attention. He brought drama and adventure—the action—of the West to East Coast civilization, and they ate it up.

Few noteworthy artists worked both in painting and sculpture. Perhaps Michelangelo is the best known with his painting of the massive ceiling in the Sistine Chapel and his neoclassical sculptures of “David” and “La Pietà.” Almost 400 years later, Remington was an artist on his own terms—drawing, painting, sculpting—and all the while, writing about it. This additional dimension gave a play-by-play quality to the many adventures he re-created on canvas: cowboys, trappers, scouts, the Lakota and Navajo Nations, and even up San Juan Hill to chronicle Teddy Roosevelt and his Rough Riders in turn-of-the-century Cuba. Remington’s life, and his portrayal of so many scenes displaying true grit, was quite extraordinary.

While his forefathers in art, and even his contemporaries, sculpted impressive images, almost all of them memorialized a moment of stillness—a kiss, a tranquil human form in pose, another merely thinking. Those sculptures remain as still today as the moments they were created. But Remington did something quite different, even audacious. His subjects were not graceful and relaxed, but rather, they were rugged folk, rough and ready.

He prided himself in capturing movement, an often-violent instant, sometimes death-defying, that would be gone in the blink of an eye. That would be almost everyone’s eye but Remington’s, for he held the image in his mind, later to draw and then mold into clay.

Observers of his sculptures could stand, staring at each piece, feeling the motion—and the emotion—of the subject, the angst, the surprise, sometimes the terror and the passion within it. They could feel it, again and again, because Remington took them down this path.

In 1895, “The Bronco Buster” was his first endeavor at sculpture after 20 years of drawing and painting. With a strong following, the piece was an immediate hit. His popularity surged. Even the Rough Riders gathered to present one to Lieutenant Colonel Teddy Roosevelt.

Remington’s lifetime work included more than 3,000 sketches, illustrations, and watercolors, with dozens of oil paintings and 22 sculptures. He also penned two books and over a hundred magazine articles and stories. But in 1909, at the age of only 48, Remington passed away from an infection following an appendectomy. He had been at the peak of his career. The art world and much of society mourned the man who almost singlehandedly shaped how Americans pictured the West.

In the 1990s at an antiques show in San Diego, a friend who knew my propensity regarding art, tugged at my elbow to tell me there was something I simply had to see, and at a reasonable price. Wary of his admonition, I trekked across the convention hall until I saw it.

When the most exquisite piece of its kind you have ever seen speaks to you, and the price is manageable, you drive home with a chunk of bronze in your car that will be with you till the end of your days.

After Remington produced “The Bronco Buster,” it would be 10 years before he returned to a similar subject. It could have been the very same mount and rider, but the psychological viewpoints are dramatically different.

“The Bronco Buster” portrays a planned action, one the cowboy even looked forward to. In breaking the wildness from a wilderness beast, taming it for work on the ranch, separating cattle or roping a runaway calf, the work is exciting but normal.

“The Rattlesnake” is the opposite.

The subject was not a mount and rider going slowly down a slope, or even taking a planned ride on a wild mustang, everyday Western activities. No, this was from a unique incident on the trail that the rider could not anticipate and simply steer his horse around. When the rattlesnake commenced its rattling and the horse had a hissy fit—to the great surprise of the rider—that was the moment Remington captured. There was no photograph to take and review in his studio, and no horse could hold such an impossible pose to model for him. This required detailed knowledge of equine anatomy and was all birthed from memory.

The rider has a slender, sinewy body, with an aquiline nose. A bushy mustache covers most of the lower half of his face. It is thick and wide, but a popular style at the time among chaps-wearing, derring-do cowboys. Holding on for dear life, his upper body careens forward, and he still has to deal with the rattling reptile.

What must have gone through his mind? A broken leg for himself or his steed could have deadly consequences. A snake bite would be even worse, and with no one to come to the rescue.

Let’s go down the path with this cowboy and his trusty steed.

In the sounds of nature, animals aren’t taught which ones mean danger. Millennia of time tells them when to stay and when to go, when to relax and when to respond, and to do it immediately.

Act, and act quickly! Move! Get away!

This was going through the mind of the rattlesnake.

Coiling provides the leverage for its V-shaped head to stand erect, several inches above its body—the pose of a viper strike. A forked tongue shoots out and withdraws; then its mouth holds open, baring fangs as deadly as a wolf or bear, with venom to back them up.

Some say the high-speed shaking of the rattle is a defense mechanism, but it is really announcing: “Because you have entered my territory, my safe space, uninvited, I am going to attack you. If you do not withdraw, you will face the consequences of your poor decision, and this is your only warning.”

All of this was conveyed instantaneously by the whipping back and forth of the snake’s tail, its response to more than half a ton of unstoppable, four-legged bulk trampling its way.

The rider was unaware of the danger until it was already beneath him. He realized that he was about to be thrown right onto the cause of the trauma. He had to think fast, calm down, and gain control of his mount, even with an overdose of adrenaline speeding to both of their hearts.

In a flash, the horse is bucking up, nearly spilling over. The core of his body whips into a deep curve and his eyes are transfixed by those of the serpent, almost paralyzing him. He is going out of his mind with fear, but can’t take his eyes off it.

Neighing begins and then becomes a screaming whinnying the rider has never heard before.

The snake shakes its rattle in a frenzy, unnerving all within earshot to preserve its ground-bound life. A horse’s legs are long and fragile: up from his hooves, his pastern, fetlock, and cannon, to his knees, tender open areas within the viper’s reach.

The ruckus continues, a visceral reaction, a brash braying, a horrifying whinnying, breath sucked in, nostrils flaring, air whipping in and out through his lungs, stomping, kicking every which way, trying to escape the dread of the here-and-now, the horror of the creature at his feet.

Through all the bucking, almost turning over, the rider is thrown back then violently forward. Head bent down, exasperated, his left hand grasps the base of his horse’s mane. His right darts up to hold onto his hat, a reflexive but futile action.

The saddle horn crushes into his gut and he flings forward again. Erratic jerking slings the belt with his Colt revolver away from his body.

All hell has broken loose in the corpus of the horse, and the rider foresees the worst. The agony in the equine is so great that nothing can restrain his turbulent motion. His forelegs pull up tightly, close to his body, as far from the danger as possible. Gravity brings him hurling back down before he goes, again, immediately skyward. All the while, the viper’s fangs and the buzzing, beating, vibrating, dizzying, and gut-wrenching sound on the ground has nearly driven the steed insane. Hooves kick up a cloud of dust, sown with the smell of grime and panic.

In this moment of madness, the snake’s tail end continues it heart-stopping drumming. Then, without notice, a serpentine shadow slithers off through the woods.

When the danger is finally gone, there is no quick return to calm, so high had been the adrenaline rush for mount and rider. These are moments you relive, that will bring nightmares to both man and beast. And if snakes do dream, this one will curl up in its hole, recalling two enormous hooves crashing down, so close to ending its rattling days in the underbrush.

In the split-second image of the sculpture, we don’t know if the viper struck. That was likely Remington’s plan—an action shot like no other—no time for hesitation; act now, as fast as you can!

I wrote the ending I saw, but we don’t know. That is the eternal beauty of the piece.